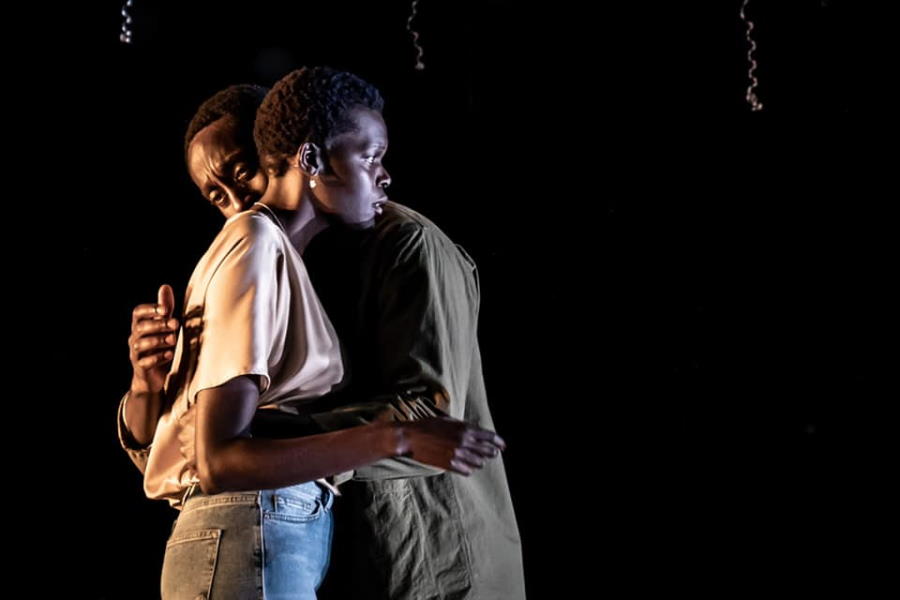 It would be a mistake to say that London’s theatres have been closed for the last 16 months—even aside from the strange, truncated reopening some attempted last autumn (David Hare’s misjudged monologue Beat the Devil being a particular low point), various spaces around London have been used as food distribution hubs and vaccination centres over the last year, and, of course, many have turned to streaming and digital theatre—trends which will carry over into a post-pandemic landscape.

Though the National Theater did briefly open its doors in late 2020 for Roy Williams’s Death of England: Delroy, the 2021 season looks like a gesture toward a more concrete and permanent reopening. It is a savvy choice to pick up in the Olivier, the National’s largest and most revered space, with Under Milk Wood, an adaptation of Dylan Thomas’s beloved 1954 radio play, in which the residents of a fictional Welsh fishing village called Llareggub go about their daily lives. Poetry and theatre intermingle in a remarkably rendered stream of consciousness. Both intimate and expansive, it is a play above all about a community: those who are welcomed in, and those who are left at the wayside. It is a production intended to draw people together, in the way that the National is wont to do. That community element is, however, a difficult pill to swallow in Lyndsey Turner’s mannered production, especially when considering the National’s decision to lay off 400 of their casual staff in 2020.

While the Dorfman, currently playing Jack Thorne’s adaptation of Hirokazu Kore-eda’s After Life, currently has the feel of an intimate black box studio in which Jeremy Herrin’s exquisitely constructed production can really sing, the Olivier auditorium, with its dramatically raked seating, strange acoustics, and enormous revolve, is much trickier prospect. Many productions are felled by that space, or come up wanting. Indeed, the most recent thing that truly worked because of that auditorium, and not despite of it, was Rachel Chavkin’s Hadestown. It’s a theatre that encourages huge, declarative performances and pieces of writing, and yet can also be a flattening space, laying bare a production’s shortcomings. Thomas’s text is thick and lush, as knotty as it is sumptuous—there should be such relish in experiencing this text spoken aloud. And yet Turner’s production starts out on the back foot and never quite recovers.

Playwright Siân Owen has employed a framing device around Thomas’s text: a Welsh nursing home in the modern day, whose banal daily rituals are interrupted by a man (Michael Sheen) who enters like a hurricane and attempts to draw out his ailing father with a recitation of the poem, wherein the nursing home residents become the inhabitants of Llareggub. You can see what the intention was: a shift from from the quotidian into transcendence, in the way Elevator Repair Service did with such apparent ease in Gatz. But it doesn’t translate: The Olivier cannot hold delicately handled naturalism, and it dilutes the power of the original text. A cast predominantly made up of older actors, including a wonderfully mercurial Siân Phillips, lends the piece a sense of nostalgia, but that dreaminess doesn’t allow the play to take off in the way the Olivier demands. Even Sheen, playing both conjurer and conductor, who is almost always a livewire stage presence, feels oddly swamped.

The Almeida, which opened briefly for the alternative Christmas show Nine Lessons and Carols, returns with poet Yomi Ṣode’s piece of prose poetry, and breathe…, directed by Miranda Cromwell. In Ṣode’s text, a young Black British man addresses his cousin in a monologue about his cousin’s mother’s impending death. It is a strange, glistening show about grief, masculinity, and inheritance, all soundtracked by Femi Temowo’s fluid onstage musical compositions. It is perhaps fitting that grief is made into something uncanny by Ṣode’s pulsing poetry: It is an emotion refracted through different lenses, made odd and alarming by the ranges in emotion, like looking at something through a thick pane of glass. Ṣode’s writing is both flinty and tender, sometimes mired in fog but occasionally as sharp and clear as water. Ravi Deepres’s video projections summon crowded thickets and crashing waves behind performer David Jonsson—stillness and movement simultaneously. It is not a piece which necessarily benefits from being watched as a play; it feels more like an installation than theatre, a cool, dimly lit room in which to stand and take stock, even for just a moment, of the surges of grief and pain that swallowed up the last year.

Then there is the Donmar Warehouse, which, aside from Simon Stephens’ binaural piece Blindness, has kept its doors shut. Now, they have installed themselves in the Vaudeville Theater for the summer with a smartly planned revival of Constellations, artistic director Michael Longhurst’s enormous 2012 hit. Originally performed by Rafe Spall and Sally Hawkins, the play this time round has a series of different celebrity pairings tag-teaming performances throughout the summer—a neat dramaturgical concept which might also helpfully encourage audiences to book multiple performances. The idea of infinite universes and castings can run into some problems, though; in a curious turn of events, there is not a single universe for the Donmar where a lesbian couple might exist. (There will soon be a gay male couple, Omari Douglas and Russell Tovey, alongside three straight cis couples.)

Nick Payne’s play, at its best, is a shimmeringly charming piece of work. A carefully formed romantic dramedy with that a cerebral conceit, it is still a deeply satisfying melding of form and content—if not quite as fresh as it felt 10 years ago. Peter Capaldi and Zoë Wanamaker are the weaker of the pairs currently performing, and draw out the way in which the show can feel a little like a glorified acting exercise. Capaldi plays up his eccentricities broadly, often operating with his torso facing out towards the audience. Wanamaker plays it straighter but still with a slightly frustrating edge of winsomeness, leaning a little too far into the character’s whimsicalities, making it occasionally feel as if she might drift away like one of the balloons clustered onstage. The delicate mysteries around the play are sapped away, instead calcifying into a series of legibly made, capital-C choices.

By contrast, Sheila Atim and Ivanno Jeremiah bring a level of detail and depth to their version of the relationship which is almost immediately more gratifying than Capaldi and Wanamaker’s take. There is a magnetism between them which makes the play’s narrowness of scope—there are infinite universes, and yet in almost every version we see, their coupling and their chemistry is undeniable—make complete sense. Of course infinity can be distilled down to these two characters colliding like particles. (Anna Maxwell Martin and Chris O’Dowd are the fourth pair, to start in August.)

None of these are exactly a case of “business as usual” for these theatres. The Almeida came under particular fire in the summer of 2020 for the scarcity of Black employees in their building, and quickly issued a statement vowing to do better—as did many other London theaters. Next for Almeida is Lolita Chakrabarti’s Hymn, which had a streamed run in February. Two shows by Black and brown artists, however, do not a progressive building make, and close eyes will be kept on their activity to come.

There is an air of tentativeness to these reopenings thus far: ever-shifting governmental guidance and a lack of financial support for workers in the industry has led to an enormous amount of precarity. A show like Constellations feels like a safe, sensible bet, if not the most theatrically thrilling experience—but can you really blame producers? One can only hope that the work going into 2022 and beyond takes the safety net ensured by celebrity castings and big-name revivals and uses it to take even bigger creative risks and swings. It is gratifying to see Sonia Friedman Productions, for one, invest in such thrilling new work in the West End as Yasmin Joseph’s kaleidoscopic play J’Ouvert, but that should just be the beginning. We hold out hope.

Ava Wong Davies (she/her) is a writer and critic based in London. She writes for The Independent and Theatre, among others.