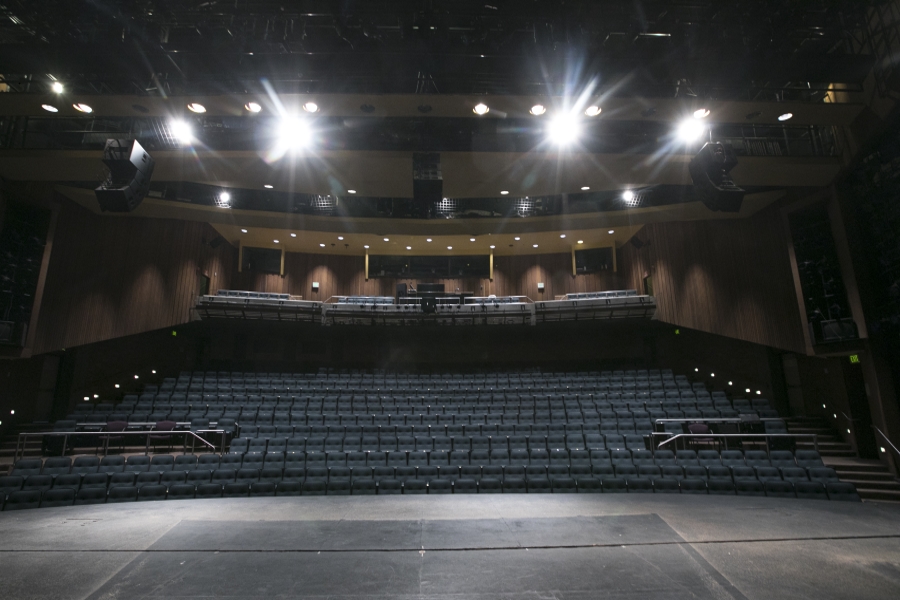 SALINAS, CALIF.: The marine climate in the city of Salinas procures grape vineyards, fields of vegetables, and bolsters a floral industry. The nearby Monterey Peninsula, the Salinas Rodeo, and a number of historic missions draw visitors. And the Western Stage, a community-based professional theatre in residence at Hartnell University, produces work that celebrates the history of the region. John Steinbeck, whose childhood home is a short walk from the theatre, is often represented onstage. We caught up with artistic director Jon Selover via email to learn more about producing theatre in California’s Central Coast.

Who founded the Western Stage, when, and why?
TWS was founded in 1974 by Ron Danko. It was originally a summer theatre festival for college students. Over the last four decades we have become a year-round, full service theatre.

Tell us about yourself and your connection to the company.
In 1984 I crashed an audition at TWS, a theatre in Salinas that I had never heard of before. I was cast in that 10th anniversary season in four shows, one of which was John Steinbeck’s Of Mice and Men. Salinas is Steinbeck’s hometown. A childhood friend of John took the cast in his private plane to tour the Salinas Valley and landed at one of the old farms that John had worked on. I didn’t realize it at the time, but I had become a Salinian that summer.

A couple of years later, while I was working on my MFA in directing at San Jose State University, I applied to be a stage manager at TWS for the summer, and over the years I worked my way up to PSM, production manager, and in 2001 I was hired as artistic director.

What sets your theatre apart from others in your region?
TWS has evolved over the last four decades into one of the most respected community-based professional theatres on California’s Central Coast. We are committed to enriching the culture of our community by bringing together professional artists, theatre students, and community members to produce a dynamic season of plays and musicals that enhance the lives of both the artist and the audience. Aspects that set us apart from others in our region include developing new works that speak to the history and culture of the Salinas Valley and its people, such as the adaptation of Victor Villasenor’s Rain of Gold for the stage. We have a long history of adapting the works of Steinbeck for the stage, including Cannery Row, Travels with Charley, Tortilla Flat, and a three part, eight-hour marathon of East of Eden.

Another way that TWS sets itself apart is by providing educational opportunities to allow students of all skill levels to explore and develop their unique talent.

What is the company’s relationship to Hartnell College? How can the students get involved in the theatre’s programming?
TWS is a community-based professional theatre in residence at Hartnell College; the academic Theatre Arts department is a separate program. TWS at Hartnell is driven by its educational mission and is committed to providing traditional and non-traditional educational opportunities for the communities of the Salinas Valley. Hartnell students audition for our regular season shows, where they can work alongside technical and artistic professionals.

Students also often participate in our 2X4 BASH—the Western Stage’s darker, edgier, and more provocative summer theatre intensive for artists ages 18-29. The popular program allows the next generation of theatre artists to collaborate, innovate, and educate through provocative contemporary works staged in our studio theatre. The 2X4 BASH challenges emerging artists and technicians with full professional responsibilities, yet in a nurturing environment. Later, after becoming full professionals, many of our interns return to TWS to visit, teach, and mentor others. This cycle offers inspiration to our students and helps TWS maintain currency in the professional realm of American theatre.

We are further committed to offering educational opportunities to the wider youth of the Salinas area.  We collaborate extensively with the schools, offering school tours, student matinees and our own youth program, YOUTheatre.

How does community engagement work fit into the Western Stage’s programming?
TWS strives to serve as a resource to recognize and facilitate community aspirations toward cultural expression. We view the community as our partners and vice versa.  We promote flexibility within our organization so that we can be alert for ways to listen to and collaborate with the rich diversity of our population. We employ extensive feedback loops: emailing, surveys, talkbacks, Facebook, and more. We have been surveying our audiences for five years and are pleased to know that our audience is becoming younger and more diverse.

Furthermore, times are more fraught now, and we stage works with subjects that weren’t discussed even just a few years ago. The feedback loops have shown that, over time, our audience has grown more engaged and appreciates the opportunity to go to a less conventional—and less comfortable—place.

Tell us about your favorite theatre institution other than your own, and why you admire it.
I have always followed TheatreWorks Silicon Valley. I got my first acting gig out of high school there and since I grew up nearby, I always have seen them as my local theatre. I find their selections to be very diverse and they do a lot of really interesting new stuff. I also have tremendous respect for our neighbor Luis Valdez and El Teatro Campesino in San Juan Bautista. We have been honored to bring some of their works to our stage, including Zoot Suit, Bandido, and Corridos.

How do you pick the plays you put on your stage?
Oh boy…the million-dollar question. There are usually a few things that are in the hopper in one way or another either waiting for rights to become available or something we have in development that can come together at any time. I try to strike a balance of familiar stuff with newer, often more challenging work for the company and the audience. I became artistic director at a time when, like many theatres, TWS was grappling with the decline of traditional theatre audiences. So an important influence on my programmatic decisions, especially in play selection, is a work’s relevance to the young and highly diverse community of the Salinas Valley.

What’s your annual budget, and how many artists do you employ each season?About $1.25 million. About 50 artists are hired in various capacities, and a whole lot of students and community members are involved.

What show are you working on now? Anything else in your season that you’re especially looking forward to?
This summer we produced a staged reading/sing-through of a dramatic musical adaptation of Of Mice and Men that was originally produced at the Provincetown Playhouse in 1958 with major Broadway talent in the cast and with Mr. Steinbeck’s approval. It is my hope that we will secure permission for a full production next year. It would be pretty amazing to produce this work for the first time in six decades since its New York premiere, four blocks from the house where John grew up. Stay tuned!

Strangest or funniest thing you’ve ever seen (or put) on your stage?
The first musical I directed was Peter Pan. It was a huge production with more than 75 people in the cast, including about 30 little kids who were cast as Neverland animals for the opening of Act Two. We scoured every local theatre for animal costumes. One of the kids was costumed as a firefly. In the middle of first dress, I was standing onstage behind the curtain trying to get everyone in places so we could go when the firefly tugged at my sleeve and said, “My butt is supposed to light up but it isn’t working, should I worry about that right now?” I stopped everything and said loud enough for everyone to hear, “This is the best question I have ever heard at a dress rehearsal. Tomorrow night her butt needs to light up!”

What are you doing when you’re not doing theatre?
My wife and I bought a travel trailer a few years ago. We try to get away for one weekend a month. Often without cell service, no internet, usually just the two of us and our dog. We take lots of walks, eat really well, and stare at the campfire and the stars at night. It really helps to disconnect and get a breather.

I also make home-brewed beer. Remarkably good beer, if I do say so myself.  Mondays are usually dark and about once a month I make a batch of beer in my backyard. Yesterday it was an amber lager.

What does theatre—not just your theatre, but the American or world theatre—look like in, say, 20 years?
I would hope that American theatre continues to look more and more like America, both the stories being told and the people doing the art. We have a great challenge in keeping theatre relevant to young people today. They have to experience art if they are to become patrons or artists. Sitting together and collectively experiencing the arts is different than anything that can be seen on a screen. We have to find ways to get the art to where they are. We’re working on it!