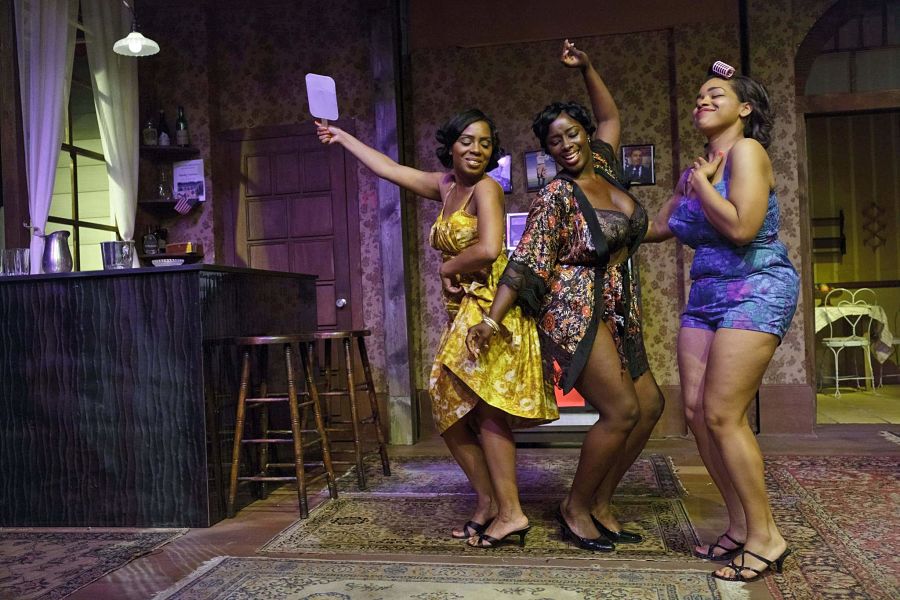 "Follow Me to Nellie's" by Dominique Morisseau, at Premiere Stages in 2011. Pictured: Nyahale Allie, Michelle Wilson, and Ley Smith. (Photo by Roy Groething)

“We are honored to welcome Dominique [Morisseau] back to Premiere,” said producing artistic director John J. Wooten in a statement. “Skeleton Crew is an ideal fit for our season and we are excited to be sharing this richly topical play with our patrons. The emergence of Dominique as one of America’s leading playwrights makes the project particularly special.”

The season will begin with Morisseau’s Skeleton Crew (July 13-30), about a makeshift family of employees working at an automotive factory during the Great Recession. Wooten will direct.

The second mainstage production will be Chris Cragin-Day’s Foster Mom (Sept. 7-24), about a 40-year-old woman whose decision to adopt a baby is complicated by an unexpected romance. Kel Haney will direct.

Also part of the programming will be a staged reading of Patricia Cotter’s 1980 (Or Why I’m Voting For John Anderson) (June 16-18), a comedy about an independent contender who runs for President. Jessi D. Hill will direct.

Premiere Stages will also present  developmental workshops of commissioned plays. First will be Nicole Pandolfo’s Brick City (Oct. 20-22), about a high school senior with a disability and a star basketball player who meet in an extended study hall. The play, which is the recipient of the 2017 NJPAC Stage Exchange Commission, will have a full production at the theatre in 2018. It is sponsored by NJPAC in partnership with the New Jersey Theatre Alliance.

A workshop will also be presented of Martin Casell’s Black Tom Island (Nov. 17-19), the 2017-18 Liberty Live Commission, about what is often seen as the first documented terrorist attack on U.S. soil in 1916.

Premiere Stages, founded in 2004, is the professional Equity theatre company in residence at Kean University.