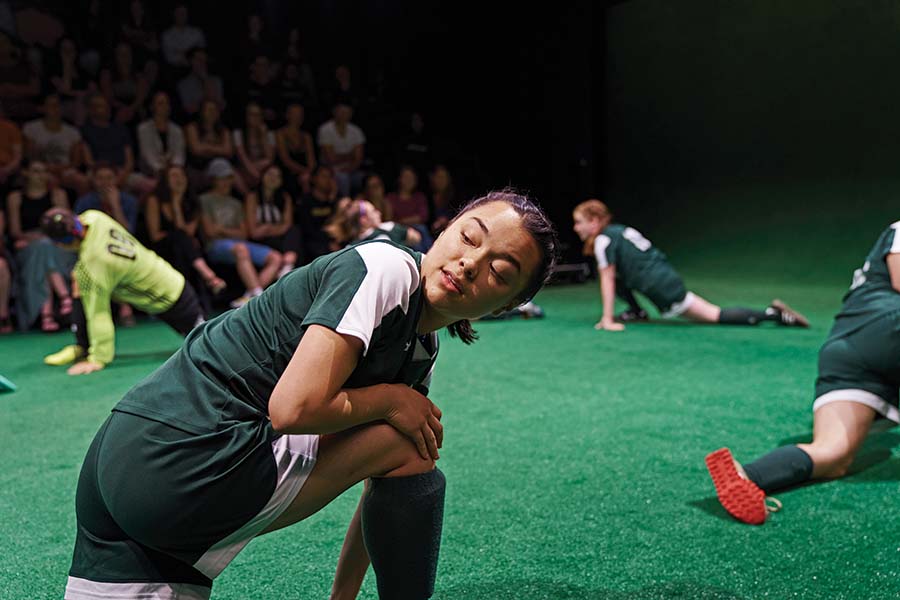 Midori Francis in "The Wolves" at the Playwrights Realm in 2016. (Photo by Daniel J. Vasquez)

NEW YORK CITY: The Playwrights Realm has announced its 2017-18 season and the launch of a new residency series. Next season, it will present world premieres by Michael Yates Crowley and Don Nguyen.

“Don and Michael’s plays are relevant, revelatory, comic and dramatic, moving and thought-provoking, and most of all, they engage meaningfully with the pressing issues of today,” said Playwrights Realm founding artistic director Katherine Kovner at the company’s annual gala on Tuesday night.

The season will open with the world premiere of The Rape of the Sabine Women, by Grace B. Matthias by Michael Yates Crowley (August-September). Billed as a “satirical dark comedy examining rape culture,” the play follows Grace, a high-school sexual assault survivor. Tyne Rafaeli will direct.

The second world premiere of the season will be Hello, From the Children of Planet Earth by Don Nguyen (February-March 2018). The show is “a comedy about conception and deep-space travel.”* Jade King Carroll will direct.

Both Crowley and Nguyen will receive a Page One Residency, as part of which each writer will receive $10,000, health insurance, internal readings, travel opportunities, professional development, a desk at the Playwrights Realm office, and an Off-Broadway production over the course of a year. The 2017-18 season will be the first season in which the Realm will offer two residencies. The Realm was inspired to expand its residency program after the success of the 2016-17 resident, Sarah DeLappe, whose play The Wolves was a finalist for the 2017 Pulitzer Prize for Drama. Both Crowley and Nguyen have been fellows with the theatre previously, as the company provides four writers with a nine-month fellowship each year that comes with $3,000.

“I’m thrilled to be producing two former writing fellows next year,” said Kovner. “And it’s wonderful to get to continue to nurture these extremely talented playwrights, not only with a New York production but also with all the support of a Page One Residency to help launch their careers.”

In addition to the residency expansion, Playwrights Realm is also launching the Scratchpad Series. This new program is open to writers around the country, and participants will be flown to New York to develop their unproduced scripts. The Realm is currently taking applications for Scratchpad, with applications due July 16.

The Playwrights Realm was founded in 2007** and develops, supports, and produces early career playwrights.

*An earlier version of this story misrepresented Don Nguyen’s play. It’s been amended.