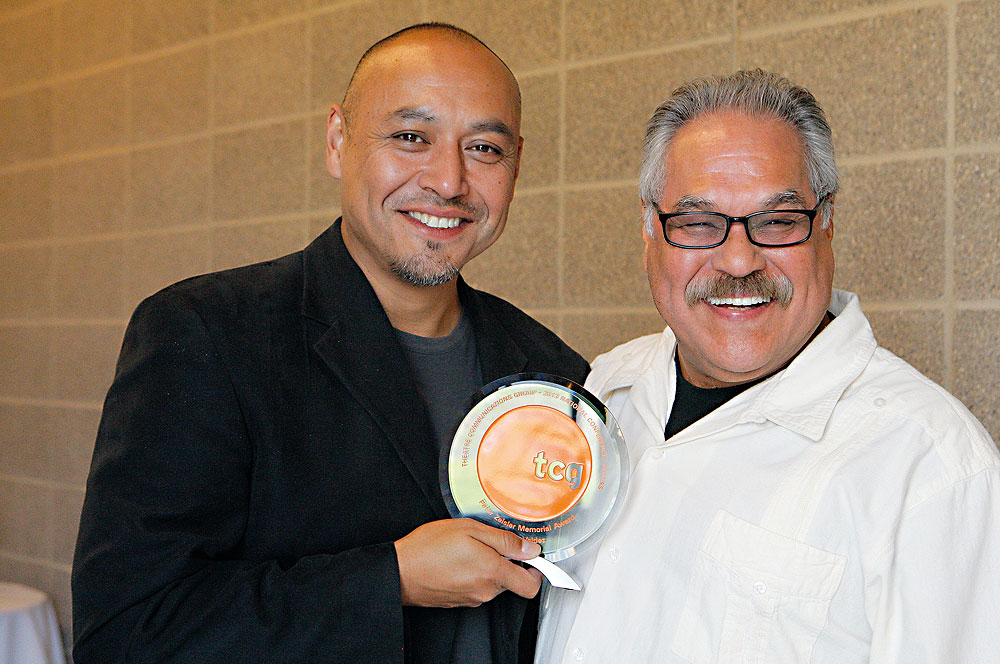 Four awards were handed out at the 2013 TCG Conference in Dallas. Below are the recipients of each award, and a sample of their acceptance speech.

Awardee: Rebecca Young, The Arts Community Alliance (TACA)
For: TACA’s work in funding and supporting 53 area theatre companies, including Dallas Children’s Theater and Dallas Theater Center.
Reaction: “We believe in the transformative power of art to constantly remind us of what it means to be fully human…and no art form does that more effectively or more powerfully than theatre.”

Awardee: Adrian Hall, director
For: His body of work, including founding Trinity Repertory Company in 1963, being a former artistic director at Dallas Theater Center, and his directing career, including The Suicide on Broadway.
Reaction: “I was the youngest [in my family] and I was a boy. My daddy carefully explained the many privileges that fact would provide me throughout my life. Sad to say, life changed after that and was never perfect again.”

Awardee: Kinan Valdez, producing artistic director, El Teatro Campesino, California
For: For developing innovative ideas at El Teatro Campesino, including the Teatro Lab of new works and Teatro’s mobile educational theatre program. And for galvanizing the Latinos in Theatre movement.
Reaction: “Peter [Zeisler] attempted numerous times to recruit my father [Luis Valdez] back in the day into the TCG fold…. My father politely said…‘There is no space for Chicano theatre in TCG,’ and Peter, with a wicked smile…said, ‘That’s exactly why you need to be here.’”

Awardee: Deborah Cullinan, executive director, Yerba Buena Center for the Arts
For: Her work in transforming Intersection for the Arts in San Francisco into a multi-­disciplinary artistic space that engages its community.
Reaction: “I often hear Margo Jones referred to as a practical dreamer…. We tend to think that one is either practical or a dreamer…. It is my belief that we must invoke a spirit of both—a spirit that does not think in either/ors, but rather in ands.”