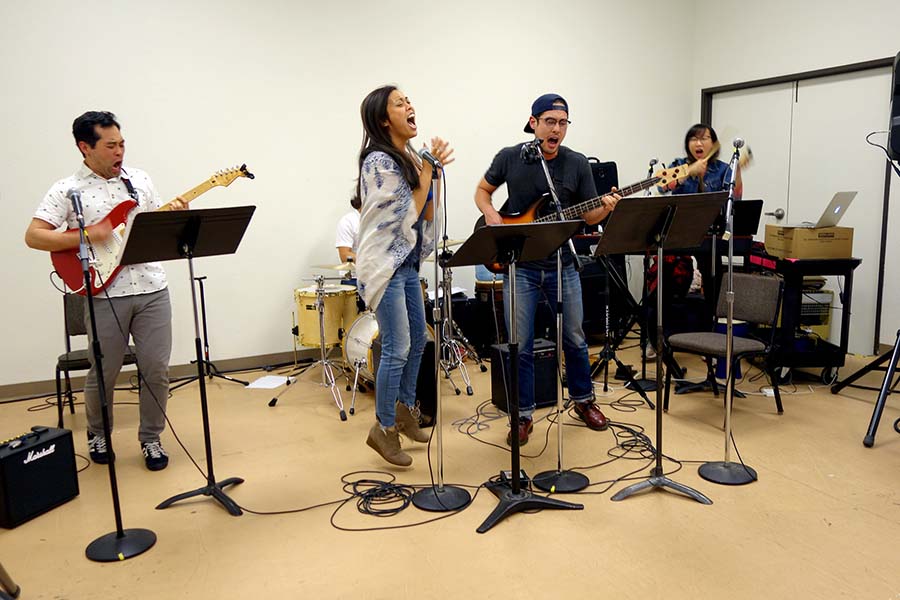 The cast of the reading of “Cambodian Rock Band” by Lauren Yee, at the 2017 Pacific Playwrights Festival at South Coast Repertory. (Photo by Tania Thompson)

COSTA MESA, CALIF.: South Coast Repertory (SCR) has announced its 2017-18 season, which will include 13 productions, five of which will be world premieres.

“Our upcoming season is both entertaining and filled with theatrical substance, with a number of ways for people to access SCR’s distinctive and exciting storytelling,” said artistic director Marc Masterson in a statement. “We have music, romance, comedy, drama, and relevance for the world we live in today. These are all great stories that will be told by some of the finest theatre artists in America and we can’t wait to share them with our audiences.”

The season will open with the Tony-winning musical Once by Enda Walsh, Glen Hansard, and Markéta Irglová, based on the film (Sept. 2-30). The musical is set in Dublin, about a young musician who meets a woman who inspires him to follow his dreams. Kent Nicholson will direct.

After that will be the world premiere of Curve of Departure by Rachel Bonds (Sept. 24-Oct. 15). The family drama takes place at the funeral of a father and is about the family he’s leaving behind. Mike Donahue will direct.

Next will be Gem of the Ocean by August Wilson (Oct. 14-Nov. 11). The play takes place in 1904 Pittsburgh, and is about Aunt Ester, who claims to be 285 years old and a “cleanser of souls.” Kent Gash will direct.

For the holidays, SCR will present its annual production of A Christmas Carol, adapted by Jerry Patch from Charles Dickens, for the 38th consecutive year (Nov. 24-Dec. 24). John-David Keller will direct the tale of Ebenezer Scrooge.

Also in December will be Sugar Plum Fairy by Sandra Tsing Loh (Dec. 3-24). In it, Loh recounts the story of when she was a preteen and the thing she wanted most was a role in her school’s production of The Nutcracker. Bart DeLorenzo will direct.

For the new year, SCR will present Shakespeare in Love by Lee Hall, based on the film, which was written by Marc Norman and Tom Stoppard (Jan. 13-Feb. 10, 2018). The story is about how William Shakespeare wrote Romeo and Juliet after falling in love with a noblewoman named Viola. Marc Masterson will direct.

Next will be the world premiere of Cambodian Rock Band by Lauren Yee (March 4-25, 2018). The play uses the music of real-life rock band Dengue Fever, to tell the story of the fallout from the Khmer Rouge.

SCR will next produce the world premiere of SHREW! by Amy Freed (March 24-April 21, 2018). The play is an adaptation of Shakespeare’s Taming of the Shrew, but with a more equitable ending. Art Manke will direct.

Next will be the world premiere of Little Black Shadows by Kemp Powers (April 8-29, 2018). The play takes place in pre-Civil War Georgia and is about two slaves whose futures become uncertain when their master announces the family is moving to Louisiana. May Adrales will direct.

The season will close with The Sisters Rosensweig by Wendy Wasserstein (May 5-June 2, 2018). The play is about three successful sisters, who gather in London for one sister’s 54th birthday.

In addition, SCR has announced its theatre for young audience lineup. The series will begin with Ella Enchanted: The Musical by Karen Zacarías and Deborah Wicks La Puma, and based on Gail Carson Levine’s book (Oct. 27-Nov. 12). The musical is about a girl named Ella who is cursed to always be obedient, and her journey to break that curse. Casey Stangl will direct.

The second TYA show will be Junie B. Jones is Not a Crook by Allison Gregory, adapted from the book series by Barbara Park (Jan. 26-Feb. 11, 2018). In the story, Junie has lost her mittens so when she finds a cool pen on the floor, she decides to keep it instead of turning it in.

The final TYA production will be the world premiere of Amos & Boris, a musical by Sofia Alvarez and Daniel Roland Tierney, adapted from the children’s book by William Steig (May 18-June 3, 2018). The musical is about the unlikely friendship between a mouse and a whale. Shelley Butler will direct.

In addition to the productions, SCR will also present its 21st annual Pacific Playwrights Festival (April 20-22, 2018), with new-play readings and world premiere productions. The full lineup will be announced at a later date.

Founded in 1964, South Coast Repertory produces a mix of classic and new plays, and runs one of the largest playwrights commissioning programs in the country.