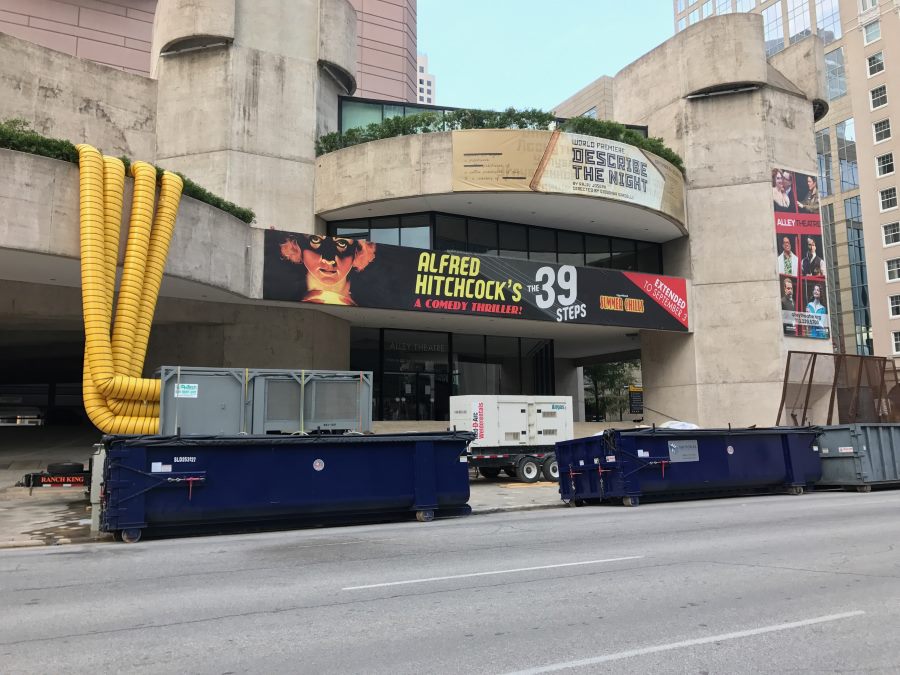 Post Tropical Storm Harvey, flood water is being pumped out of the Alley Theatre.

Federal Emergency Management Agency director Brock Long has called Tropical Storm Harvey the “worst disaster” in Texas history. The death toll has increased to 70, and AccuWeather estimates total losses could reach $190 billion. Almost two weeks removed from Harvey’s land fall, parts of the city remain underwater and citizens are returning to their homes; the rebuilding process is fully in motion. For the Houston theatre community there still remain many unknowns and obstacles, but also mutual support.

Notably, many of the city’s theatre companies—Stages Repertory Theatre, A. D. Players, Classical Theatre Company, and Main Street Theater—had minimal to no water damage. But some did. Smaller companies, including the Ensemble Theatre, Company OnStage, and Island ETC reported significant water damage and have begun recovery. Island ETC had almost 3 feet of flooding in the 130-year-old building it calls home, the historic Strand Theater, just outside of Houston in Galveston. The company has created a You Caring campaign to fund renovations. Their initial goal is $25,000; as of presstime, they’ve raised nearly $5,000.

The companies and spaces that saw the most flooding were the city’s large and most well-funded organizations, among them the Alley Theatre, Houston’s only LORT A house. The Alley is located in the Downtown Theatre District, nestled alongside Buffalo Bayou, which normally is about 30 feet below the street level. Theoretically this area shouldn’t be prone to flooding, yet it saw the worst damage of any area in the city.

During Harvey, water breached the city’s underground tunnel system, leaving 10 feet of water, near to the ceiling, in the Alley Theatre’s underground spaces—which include its Neuhaus Theatre and the adjoining lobby, dressing rooms, and props closet. And because the building’s electrical services are downstairs, the Alley still does not have electricity. The entire electrical system must be replaced. According to Alley’s managing director, Dean Gladden, the costs to renovate the building will be more than $10 million, and power won’t be restored until November. This is a particularly huge blow, because the Alley recently finished a $46.5 million building renovation to address damages from Tropical Storm Allison in 2001. “It’s pretty catastrophic,” Gladden admits.

As this is the beginning of the fiscal year, the company faces a particularly challenging road. Immediately after Harvey hit, the Alley cancelled all remaining performances of its hit summer show, The 39 Steps, which had been extended through Labor Day weekend. Notably, the show was on track to break box office records. Even though the company has comprehensive flood insurance, this won’t cover all the damages, including lost revenue from ticket sales.

The Alley’s next production, the world premiere of Rajiv Joseph’s Describe the Night, would have opened in the Neuhaus, but will now be presented in the Quintero Theatre at the University of Houston. The set for that play is being completely rebuilt, because the old set was sitting in the Neuhaus when Harvey hit. “The Describe the Night set is gone—it’s underwater,” says Gladden.

The company’s second world premiere of the season, Lawrence Wright’s Cleo, was set for the Hubbard Stage, which was undamaged but remains without electricity. It has been postponed to April 2018. In addition, the holiday show The Santaland Diaries, which was supposed to be in the Neuhaus, has been cancelled.

Aside from the physical damage to theatre’s spaces, Harvey also hit several staff members, who lost their homes and had to be rescued. “We have various people who took water in their homes,” says Gladden. “We have some people on higher-up floors in their apartments, where everything is flooded below them and who are stuck in their apartment.” To help these staff members, the company has set up an Employee Flood Assistance Program and is currently accepting donations (in addition to its own building recovery campaign). While the company faces much uncertainty at this time, they remain optimistic that the Neuhaus will be ready for Lover, Beloved: An Evening with Carson McCullers by Suzanne Vega, which begins performances on Feb. 9, 2018.

“Alley staff has worked miracles in revising our spring calendar, in order not to lose any productions in our subscription season,” says artistic director Gregory Boyd in a statement. “And we know too how supportive all our patrons and audiences have been during challenging times—that gives us great energy going forward.”

While the physical damage to the Alley Theatre has been the most visible obstacle for the Houston theatre community to overcome, many small and new theatre companies have also faced setbacks from the storm. The weekend following Harvey saw Gravity Players, Dirt Dogs Theatre Co., Firecracker Productions, and Cone Man Running all performing to sparse audiences. For these companies, the lost revenue from cancelled performances and lost ticket sales has already proven detrimental, leaving these companies with more questions than answers as to how to keep their organizations in the black. Despite low turnouts and lost revenue, each company reported that audiences were enthusiastic and eager to support local theatre, and each theatre has set aside at least one pay-what-you-can performance to benefit the Hurricane Harvey Relief Fund.

While most small companies in Houston don’t own a space, Cone Man Running recently purchased the Beacon Theatre (formerly the Frenetic Theatre). The space had minimal water damage and no flooding. They reported the loss of a light board, a sound board, a dimmer, and a sofa. Like other relatively unharmed companies, Cone Man Running’s biggest financial loss was at the box office, which is how they pay the bulk of their bills. Co-founder Christine Weems notes, “We also rely heavily on donations, but at a time when people have lost their homes and their livelihoods, it seems wrong to ask for donations to benefit a luxury like theatre.”

But the setbacks from Harvey didn’t stop Cone Man Running from continuing to do what it does best. This past weekend, it presented two encore performances of Fragments by Michael Weems. Proceeds from those pay-what-you-can shows went to the Hurricane Harvey Relief Fund. “Our take on it was even if we raised only $50 over the two performances, any money raised was something,” says Weems, adding, “At least we gave people an opportunity to escape what they had been going through for a short while.” Audiences were sparse, between 10-12 people each night, mostly friends of the cast who wanted to support the company and the cause. Yet Cone Man Running was able to raise $520 and, with a match from an anonymous donor, donated $1,040 to the Hurricane Harvey Relief Fund.

Cone Man Running’s goals following Harvey demonstrate the resilience and collaborative spirit of the Houston theatre community. Every year, the company has an event called Pass and Go, for which playwrights write 15 pages of a play on the fly. The Sept. 15 performance of Pass and Go will be a benefit for Company OnStage, a 40-year-old community theatre in southwest Houston that experienced flooding. They had just moved into a new space and renovated it before Harvey hit. The theatre saw 15 inches of flood water, which completely warped the stage.

According to Company OnStage artistic director Stacy Bakri, the damage “will, in all likelihood, delay the start of our new season, as we are now faced with having to replace our newly installed stage and carpet, repair some wall damage, and replace some of our seats that were stacked along the wall awaiting installation.” In addition, they had to throw out water-damaged props, furniture, set pieces, costumes, and historical documents that were decades old. But with the help of volunteers, Company OnStage is in the process of rebuilding and hopes to open for performances in October.

“It is heartbreaking,” Bakri admits. “But at the same time incredibly uplifting because the number of people—many of them complete strangers, who walked through our doors with tools in hand and asking ‘What can we do to help?’—was astounding.”

Post-Harvey, there is one consistent theme among local theatres: The show must go on. Performances are up and running this week at 4th Wall Theatre Company, Stages Repertory Theatre, Dirt Dogs Theatre Co, and Gravity Players. The Ensemble Theatre, which saw significant water damage to their midtown space, has delayed the start of their season opener, Sassy Mamas, to Sept. 22. And despite damage to its facility, Ensemble Theatre has donated $10,000 to the relief fund and is currently offering a variety of free performances.

Meanwhile, A.D. Players pushed the opening of its production of Mary Chase’s Harvey to Sept. 14. Though the play was chosen well before the storm, of course, A.D. Players has initiated a series of “Harvey for Harvey” access and fundraising initiatives around performances of the play. “The irony is not lost on any of us that our next show is Harvey,” admits executive director Jake Speck. “But we see it as a unique opportunity to do what theatre does best: inspire, entertain, and lift the spirits of those who need it most.”

Like many Houston area theatre companies who are offering free and/or pay-what-you-can performances to encourage attendance while also not adding financial strain to the local community, A.D. Players has pledged to donate 20 percent of ticket proceeds from its run Harvey run to relief efforts, and will provide free tickets to Harvey for first responders and flood victims.

Meanwhile, Stages Repertory Theatre will revive their hit production of Xanadu for two free performances this weekend at Miller Outdoor Theatre. What was already intended to be a fun night for Houston families has become something that feels even more necessary now: an escape from reality for 90 minutes before the community gets back to the work of rebuilding.

“I am deeply humbled by the opportunity to stand with a group of unstoppable theatre artists this weekend and to share a simple story with a community in need,” says artistic director Kenn McLaughlin. “It may not seem like much, but in the end all that will ever remain are the stories we tell.”

Trevor Boffone is a Houston-based scholar, educator, and writer. He is the founder of the 50 Playwrights Project and a member of the Steering Committee for the Latinx Theatre Commons.

*This story has been updated throughout.