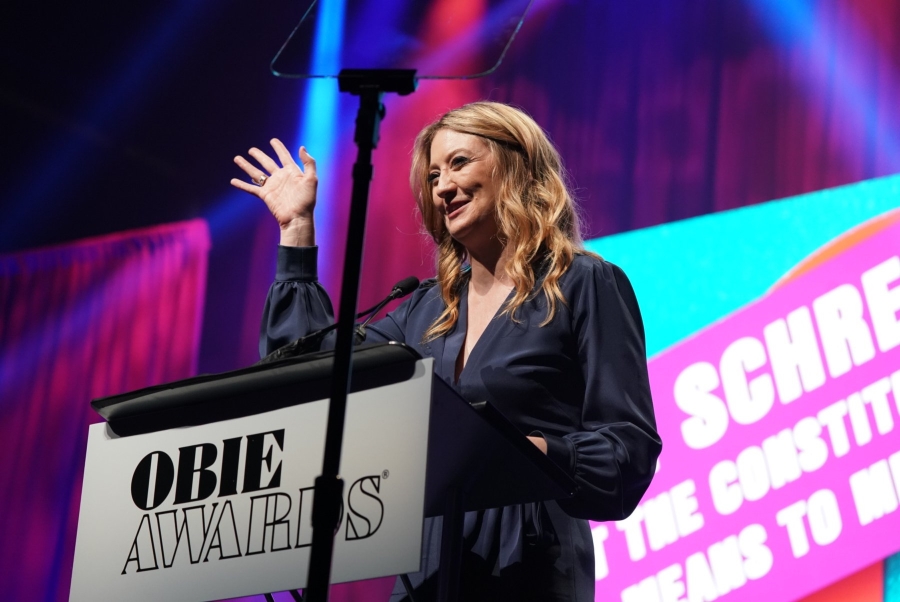 Heidi Schreck at the 2019 Obie Awards.

NEW YORK CITY: The 64th annual Obie Awards took place on Monday evening at Terminal 5, a three-story music venue in Hell’s Kitchen. This annual celebration, co-presented by the American Theatre Wing and the Village Voice, shines a light on the Off- and Off-Broadway theatre community—outside the glare of the Great White Way.

It’s always a fun, laidback affair. There are no set categories, judges can award multiple winners in the same category, and the judges can even invent new categories. The 2019 judges included Michael Feingold, Arin Arbus, Rachel Hauck, Riccardo Hernandez, Rajiv Joseph, Kecia Lewis, and Jesse Oxfeld. Winners are strongly encouraged to attend, and awards are doled out spontaneously. There’s no dress code—but it seems this year that attendees all got a memo to wear glitter and leather. Oh, and there’s an open bar.

The intrepid emcee of the evening was Rachel Bloom, the creator and star of the late, great television musical show “Crazy Ex-Girlfriend,” who dazzled in a sequins-bedecked blazer and sang an opening tune à la Rebecca Bunch. “I’m thrilled to be here because I’m a theatre kid,” effused Bloom. “Give me a shout out if you’re a theatre kid!” The crowd hollered. “I know my parents didn’t plan to have a theatre kid—we kind of think out of the box, we’re weird, we take them by surprise, and often they’re playing catch up with what we’re doing.”

Her opening song imagined the phone calls attendees might be having with their parents after winning, explaining what an Obie Award is and sharing the bootstrap realities of the Off-Broadway scene. “No, not a Tony, it’s called an Obie,” sang Bloom. “It’s not the award for the best oboe player!”

After reminding the (maybe) winners in the house to keep thank-you speeches short and sweet, Bloom made a special request: “I want to acknowledge our parents and our families.”

The first winner of the evening did just that. Heidi Schreck took home the prize for Best New American Play for What the Constitution Means to Me, which had its start downtown with True Love Productions, Clubbed Thumb, and New York Theatre Workshop before making its way to Broadway this season (where it’s nominated for a Tony). “I want to thank my mom, who at 14 stopped a violent man by testifying—and I feel like that is what I am trying to do every night,” said Schreck. “To just testify in support of my mom.”

Playwright Clare Barron and director Lee Sunday Evans were lauded with a Special Citation for the production of Dance Nation at Playwrights Horizons. Barron received a special—and uncannily appropriate—message during her speech. “Oh my God! My mom just texted,” said Barron with a laugh. “‘Celebrate this Obie, send photos to Dad. Kisses,’” she relayed.

In a heartfelt speech, Palmer Hefferan, who received an Obie Award for Sustained Excellence in Sound Design, thanked her late father. “This community is so full of love,” she said. “We work such rigorous hours that it feels so isolating sometimes. When something happens, like a father dies, you think you don’t know how to reenter the world—everything stops. But the directors I worked with this season flew down to be with me in Florida where my family is.”

Leigh Silverman received an Obie Award for Sustained Excellence in Directing and gave a special shout-out to her father, who was among the crowd at Terminal 5.

And Marcus Gardley, who took a Playwriting Award for The House That Will Not Stand at New York Theatre Workshop, invoked a larger sense of family, thanking “the 30 women who raised me. I had the fortune of being born the very day my great grandmother Lucy died —and so these women decided I was her. They took me under their wing, and until I was 16 every Sunday I got to sit in the kitchen and listen to their stories.”

Indeed the collegial spirit of the theatre community can form a family feeling of its town. And the Obies room was united by theatre folks who know all too well the struggles of producing and performing with tight budgets and little to no resources.

Patti LuPone even shared her (long ago) struggles. In a humorous bit, Bloom invited LuPone, who’s been a guest on “Crazy Ex-Girlfriend,” to the stage for an interview about her experiences “Off Off Off Off Off-Broadway.” LuPone spoke about her siblings, who with her made up the LuPone Trio, about her makeshift theatre family at Miss Marguerite’s Dance Studio on Long Island, and about her star turn as Louise in a production of Gypsy—performed on a friend’s backyard patio.

Performances for the evening included a singalong rendition of Oklahoma!’s “Oh, What a Beautiful Mornin’” led by Damon Daunno, the lead in another production now on Broadway, in this case after a hit run at St. Ann’s Warehouse. The company of STOMP made some noise in celebration of the show’s 25th anniversary. And in a heartfelt tribute, Margo Seibert took the stage to sing Joni Mitchell’s “Both Side Nows” as a way to remember theatre artists who died this past season.

Toward the end of the evening, the Obie Awards recognized James C. Nicola, artistic director of New York Theatre Workshop, with a Lifetime Achievement Award. Nicola thanked his “fellow warriors and comrades” by talking about his finding his family in the theatre. “I was among a group of people, free of judgement—an equal, accepted and valued,” he said about finding his place.

Jeffrey Horowitz, founder and artistic director of Theatre for a New Audience, was similarly honored. “A Lifetime Achievement Award is not mine alone,” Horowitz said. “It’s 40 years of achievement with hundreds of directors and designers and thousands of actors.”

The livestream of the show can be viewed here, and below is the complete list of winners:

Playwriting
Marcus Gardley, The House That Will Not Stand (New York Theatre Workshop)