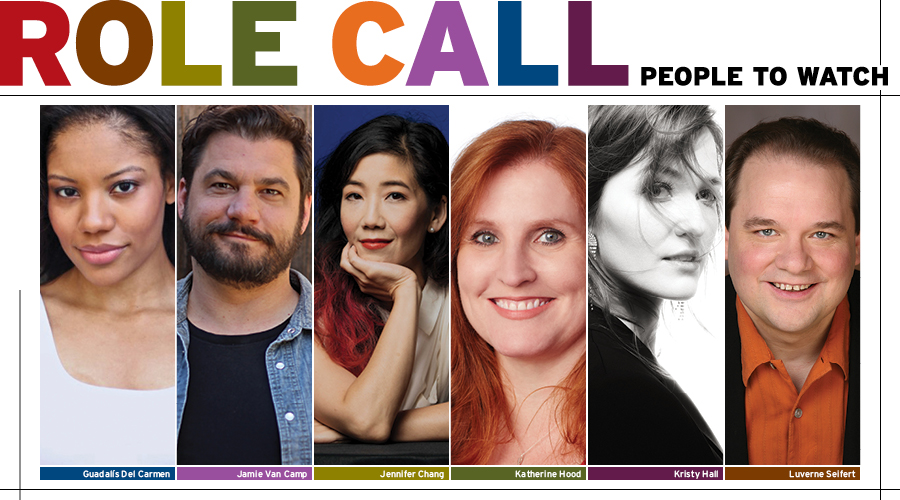 Profession: Playwright and actor
Hometown: Chicago
Current home: New York City
Known for: Bees and Honey (Kilroys List 2019), A Shero’s Journey; or, What Anacaona and Yemayá Taught Me… (published in Theater magazine), and My Father’s Keeper (Kilroys 2019 Honorable Mention).
What’s next: She’s working on her next play.
What makes her special: “During a time in which anti-Blackness runs rampant in our country, playwrights such as Guadalís are incredibly necessary,” says Trevor Boffone, scholar and educator in Latinx theatre. “As an Afro-Latina/Dominican playwright, Guadalís offers nuanced depictions of how Blackness and Latinidad intersect, ultimately expanding our understanding of both communities. Her plays are bold, dynamic, funny, pointed, and fresh.”
Erasing boundaries: “You know that feeling when you walk into rooms and people look at you like you’re from another planet,” says Del Carmen, “even though you’re a daughter of immigrants born and raised in the Midwest and are also a descendant of Africa, la negra tiene tumbao? I started writing so people can stop asking me why I speak Spanish or why I was invited to Latinx spaces, and so folks like me don’t have to use language as a passport into spaces meant for us to begin with. I started writing so I could talk about anti-Blackness and things that annoy me, like guys wearing sunglasses at night in dark clubs.” She adds, “Mainly I write because my brain won’t shut off at 3 a.m., and writing plays are my lullabies. Also, it’s NYC, the city with the largest population of Dominicans outside of Dominican Republic—y’all gonna start producing Dominican plays yet?”

Profession: Educator
Hometown and current home: Placerville, Calif.
Known for: He’s directed a number of shows and devised the short play It’s Only Temporary, plus pieces with Detroit company the Hinterlands and Coloma, Calif.’s American River Conservancy. He also provides educational outreach and advocates for theatre programs in schools.
What’s next: He’ll direct a highly festive outdoor A Midsummer Night’s Dream as a collaboration between Folsom Lake College and David Girard Winery (May 2020). He will also develop a small theatre festival dedicated to untold stories of the Gold Rush.
What makes him special: “Jamie Van Camp is transforming the landscape of rural theatre in America,” says Michael Fields, producing artistic director of Dell’Arte International, where Van Camp received his MFA. “This is his passion, and he has put action behind his words, starting a new theatre company and initiative to engage his rural community of Placerville. His work has taken off. His vision is becoming a reality. His community is behind him. And the theatre in rural America has become more vital because of Jamie.”

Small-town theatre: “I lived in a rural town and was very lucky to have extraordinary theatre teachers in high school who gave me a lot of encouragement and confidence to pursue this as a career,” says Van Camp. “It became clear after I was away for a while that accessible arts exposure and education have been diminishing rapidly in our region, and there was a need to advocate for theatre in rural and remote areas. Exposure to theatre in small towns has never been more crucial, because it has the most potential to heal and build bridges in struggling communities.”

Profession: Director, educator, and actor
Hometown: Born in San Francisco, raised in Daly City, Calif.
Current home: Los Angeles
Known for: Her direction of Qui Nguyen’s Vietgone at East West Players won the 2019 Los Angeles Drama Critics Circle Award, and her staging of Rajiv Joseph’s Animals Out of Paper was a Los Angeles Times Critic’s Choice. She was a 2018 Drama League New York Directing Fellow.
What’s next: She’ll direct Hannah and the Dread Gazebo (Fountain Theatre), Where the Mountain Meets the Moon (South Coast Rep), and The Time of your Life (Antaeus Theatre Company).
What makes her special: Playwright Naomi Iizuka, a colleague in the University of California-San Diego’s Departmetn of Theatre and Dance, worked with Chang on Anna Moench’s Birds of North America and Stephen Del Rosso’s 53% Of. “They were gorgeous productions, but what really struck me was how deft she was in working with playwrights from the earliest drafts,” says Iizuka. “Jen has this gift for asking the right questions, intuiting the shape of a nascent piece of writing, and building the ecosystem of the play with actors and designers in this very singular, inspiring way.”
Unlocking doors: Chang, whose immigrant family loved theatre but weren’t involved in making it, compares herself to a locksmith, working to unlock the play and performances “to curate the conversation between the creative team, performers, and audience.” She adds that she’s “interested in the question of ‘Who or what is an American?’at this moment in time.”

Profession: Administrator and producer
Hometown: Born in Washington, D.C., raised in Northern California, Seattle, and Ohio
Current home: Brooklyn
Known for: This year marks her 31st at the Juilliard School, where she serves as managing director of the Drama Division. She’s nurtured and supported the artistic journeys of more than 500 actors, playwrights, and directors, and says she’s most proud of helping shape the culture of the division’s respected entrance audition experience. She is also a founding board member of the New York City-based Red Bull Theater.
What’s next: Continuing her work at Juilliard, supporting the mission and work of Red Bull, launching the Peter West Theater Artist Fund in honor of her late husband, lighting designer Peter West.
What makes her special: “For me she is the beating heart of the Juilliard Drama Division,” says Richard Feldman, associate director of the Drama Division.“In every interaction she embodies unmatched generosity, integrity, and humanity. She’s also whip-smart and, as far as I can tell, completely tireless. So much of what makes Juilliard both artistically excellent and a warm and human place is because of who Kathy Hood is, and all she does for all of us.”
By your pupils you’ll be taught: “A wise friend of mine often says, ‘The way to talk about your work is the way your work will be.’ I take that saying to heart and make every effort to lead with generosity, humanity, curiosity, and humility,” Hood says. “My students inspire me every day with their courage, imagination, passion, and devotion to use their art form as a transformational tool of service to a greater community. They show me what it means to be a true artist-citizen.”

Profession: Costume designer and professor
Hometown: Born in Cologne, Germany, raised in Skokie, Ill.
Current home: Columbia, S.C.
Known for: She heads the costume design program at the University of South Carolina as well as designing professionally. Favorite designs include Frankenstein and Pygmalion with Remy Bumppo Theatre Company, Byhalia, Mississippi with Definition Theatre Company, and Bullet for Adolf at New World Stages.
What’s next: She’s designed costumes for Howards End at Remy Bumppo (through Oct. 5).
What makes her special: “I had the pleasure of working with Kristy Hall for the first time on a production of Hairspray in honor of our high school’s 50th anniversary,” remarks Definition’s artistic director, Tyrone Phillips. “Now, as a frequent collaborator, I can say that Kristy is an excellent artist and her designs are always a cut above the rest.” He enthuses, “Our world needs more artists who are not only dedicated to their own careers but, like Kristy, are also passionate about inspiring the next generation of theatremakers.”
Someone else’s shoes: “Growing up with opera-singing parents, I lived backstage,” Hall recalls. “I was inspired by the transformations they would undergo to become someone else, and I found it profoundly beautiful; my parents were stepping into the shoes of someone else. For me, the work is about empathy. As long as there are different kinds of people with whom we can empathize, then the work will be vital for me. In the past, I have been asked why would I choose to be a designer instead of an actor. My answer always is: Why would I empathize with one character when I get to empathize with all of them?”

Profession: Actor and administrator
Hometown: Born in Sleepy Eye, Minn., raised in Waverly, Minn.
Current home: Minneapolis
Known for: Seifert is the co-founder and co-artistic director of the Twin Cities’ Sod House Theater, which produces site-specific works in greater Minnesota. Past shows include The Cherry Orchard, staged at historic mansions to draw attention to rural housing and farm foreclosures; The Visit, performed in under-used village museums; and Urinetown, presented in the small town of Lake Benton to illuminate clean-water challenges.
What’s next: FARM, an interactive production capped by the planting of a community garden, and a piece, developed with Joy Dolo, about the case of ruby slippers gone missing from the Judy Garland Museum in Grand Rapids, Minn.
What makes him special: One company Seifert has worked with for more than 20 years is Minneapolis’s Ten Thousand Things, bringing theatre to prisons, shelters, and low-income centers, as well as “a savvy theatregoing general public,” says Michelle Hensley, the troupe’s former artistic director. She raves of Seifert, “To each part, Luverne has brought his enormous intelligence, intuition, instinct, physical skill, comedic sensibilities, depth of understanding, and compassion. But what makes him one of my very favorite actors to work with is his kindness, generosity, humility, and one of the best senses of humor around.”
A place for everyone: The mission of Sod House Theater, he says, is “to diminish the divide between rural and urban communities. Theatre can achieve this because we are simply telling a story together, without judgement, and we leave our audiences to challenge or confirm their belief systems. This is how theatre can be vital.”