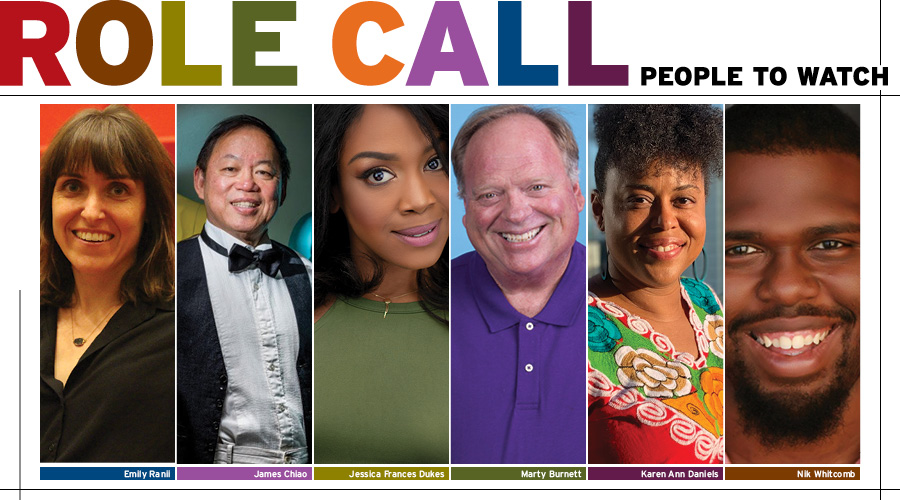 Profession: Director & artistic leader
Hometown: Born in Chicago, raised in Raleigh, N.C.
Current home: Boston
Known for: Work in unusual locations—Shakespeare in a pool, Molière in treehouses. Her credits span the East Coast, from Wheelock Family Theatre, where she is artistic director to Boston University’s Opera Institute and School of Theatre, New Repertory Theatre, and Burning Coal Thea­tre Company. She’s also served as the academic program head of Boston University’s Summer Theatre Institute since 2013.
What’s next: Wheelock Family Theatre has postponed The Little Prince and Bud, Not Buddy, their first time staging shows in rep.
What makes her special: Ranii is “someone I imagine remaking American theatre,” says Jerome Davis, Burning Coal’s founding artistic director. “She grew up in a Southern town of meager means, the child of a journalist and an ethics teacher at a nearby community college. At 13, she played Juliet for us. Hard as it may be to believe, she had a vision for theatre even then, fully formed, and she has been working tirelessly at realizing that vision since. She’s also a complete goof, which makes working with her an absolute joy.”
Theatre for all: Ranii takes pride in her company’s equity, diversity, and inclusion initiatives. “We are proud to report that we have never, in our 39-year history, turned a student away from our education classes for inability to pay tuition,” she says. Wheelock’s student matinee series also has sliding-scale prices. Stressing the theatre’s accessibility efforts, she adds, “Our artists are representative of the greater Boston area, ensuring that our young audiences have an opportunity to identify with the heroes and heroines on our stages.”

Profession: Musical writer, lyricist, and composer
Hometown: Guangzhou (Canton), China
Current home: Cerritos, Calif.
Known for: Chiao is the writer, co-lyricist, and composer of Mannequin Man by Day, Tenor by Night, a fantastical take on his own life story.
What’s next:  Mannequin Man was scheduled to be presented by Cerritos Center for the Performing Arts near Los Angeles April 3. Chiao plans to tour the musical throughout the U.S.
What makes him special: Director and writer Samantha Simmonds-Ronceros says of Mannequin Man, “The journey from the dream to the stage is wondrously profound, to say the least. The musicality is absolutely beautiful.”
In his blood: Fifty years ago, Chiao’s parents were persecuted for being musicians in China, but he persevered, and at 65, he retired from a successful mannequin business to pursue music at CalArts. In 2017, he graduated with an MFA in music and an idea for his original musical. “Throughout all stages of my life, I have acted with music at the forefront of my mind,” he says. When his parents were sent to labor camps and he was notified he’d “be sent to work on a desolate island in China, I sold my blood to get money to buy an Erhu (Chinese violin) to bring music to the remote countryside village, standing up to the government in my own small way.” Later, at trade shows for his mannequin business, he sang arias from various operas to attract customers. After his father’s death, he “realized life is too short not to follow my passion and family musical legacy.” The experience of that career change, he says, taught him “it is possible to achieve the dreams you once thought were impossible!”

Profession: Actor
Hometown: Born in Washington, D.C., raised in Riverdale, Md.
Current home: New York City
Known for: Recently Dukes has been busy on Netflix: as a regular on Ozark and in a recurring role on Jessica Jones. Last year, she was a Drama League nominee for her appearance in the title role of By the Way, Meet Vera Stark at Off-Broadway’s Signature Theatre. Previous stage work includes Is God Is at Soho Rep, Yellowman at the Billie Holiday Theatre (Audelco nomination), and Bootycandy at Playwrights Horizons (Obie Award), and appearances at Chicago’s Second City, Yale Repertory Theatre, McCarter Theatre Center, Arena Stage, and Woolly Mammoth Theatre Company, among other theatres.
What’s next: Starting March 27, you can catch Dukes as Maya Miller in Season Three of Ozark.
What makes her special: “Dukes is an all-in, ‘take no prisoners’ kind of actor in her approach,” says director, actor, and educator Timothy Douglas. “Her ferocity in the fulfillment of authentically honoring each character she embodies is equally matched with an inspired and inspiring brew of heart and humanity.”
Words have power: “Stories can change minds,” Dukes says. “You read a child a story to influence or inspire them, and you say affirmations to motivate or push yourself. Words have the ability to do what people sometimes can’t. Slowly but surely, we are challenging the system and the world to think differently based on what we put on the stage, and to me that is so powerful.”

Profession: Community connection in theatre
Hometown: San Diego, Calif.
Current home: New York City
Known for: Daniels is the director of the Mobile Unit at the Public Theater. “I like to think I’m known for bringing people together,” Daniels says. “And killing it with a good 11 o’clock number.”
What’s next: Daniels is currently at work on a spring tour of Cymbeline, directed by Carl Cofield. She’ll next plan the 10th anniversary celebration of the Mobile Unit, as well as her own writing, directing, and singing projects.
What makes her special: One of Daniels’s great strengths, according to Shanta Thake, the Public’s senior director of artistic programs, is “innovation through listening. She is invested in finding out what the communities we work with are interested in seeing, the stories they want to hear, the way they want to partner with us, and how we can learn from one another how to create meaningful dialogue through theatre. She is an undeniable force in the American theatre.”
Sharing the tools: Daniels loves to devise stories “with a community that are reflective of who they are, their histories, and their values—offering the professional tools of theatre to non-professionals to share who they are so we can see how we are all connected,” says Daniels. “The dream is to provide a stage for the voices not traditionally heard in theatre—people affected by incarceration, for example, and other communities whose stories are usually told by people who have no real connection to their singular position and perspectives. I want those stories to rise. We always talk about how theatre is transformational, but I had never really witnessed it on this level until I started working in this way.”

Profession: Designer and technical director
Hometown: Omaha, Neb.
Current home: Del Mar, Calif.
Known for: With the help of a small group of dedicated volunteers, Burnett has been designing, building, painting, installing, and striking all mainstage shows as the technical director and resident designer at Solana Beach, Calif.’s North Coast Repertory Theatre since 1992.
What’s next: Harold Pinter’s The Homecoming, which was scheduled to run April 8-May 3, and the West Coast premiere of Human Error by Eric Pfeffinger (May 27-June 21) are up next. The theatre’s season will close with Forbidden Broadway’s Greatest Hits, created and written by Gerard Alessandrini (July 8-Aug. 9).
What makes him special: “Marty has been a huge part of the reason North Coast Rep has grown into one of the leading theatre companies in Southern California,” says David Ellenstein, the theatre’s artistic director. “Even as he approaches his 200th consecutive set design at North Coast Rep, Marty continues to amaze with his enthusiasm, creativity, and artistry. With childlike wonder he declares each time, ‘This is my best one yet!’”
Growing with his theatre: While Burnett began his career as an actor, he found that his skill set made him a better fit for set design. North Coast Rep has been a great fit for him as well, and he says that one of the most rewarding things about his career has been that it has developed as the theatre has grown from a small community theatre when he started there in 1992 into a celebrated nonprofit attracting talent from all over the country.

Profession: Actor, director, and casting director
Hometown: Omaha, Neb.
Current home: Chicago
Known for: Whitcomb has worked in a number of capacities in theatres across the Midwest, including the Guthrie Theater, Goodman Theatre, and the Old Log Theatre. He is currently a casting associate at Paskal Rudnicke Casting, where he works on full seasons for Northlight Theatre and Definition Theatre, plus a number of television and film projects.
What’s next: In addition to serving as the associate director and choreographer for the world premiere of Red Island at Collaboraction Theatre Company, Whitcomb is directing the remount of Queer Eye: The Musical Parody this June for LGBTQ Pride Month. He can be seen in the upcoming HBO Max series Station Eleven as well as heard on the cast album for Hildegard: An Unfinished Revolution.
What makes him special: “Collaborating with him, you expect complete honesty in every interaction,” says Matt Gutschick, artistic director of the Rose Theater of Omaha. “He’s a joyful, humane storyteller who naturally builds bridges between people.”
Representation through casting: Growing up in the theatre, Whitcomb says he saw a lack of “people that looked like me making the work I was seeing and teaching me how to do it.” He says he’s found fulfillment as a casting director by including underrepresented people in ways he previously deemed unimaginable. While he looks forward to spending more time in rehearsal rooms, he’s committed to diversifying the industry and creating spaces crafted with everyone’s success in mind.