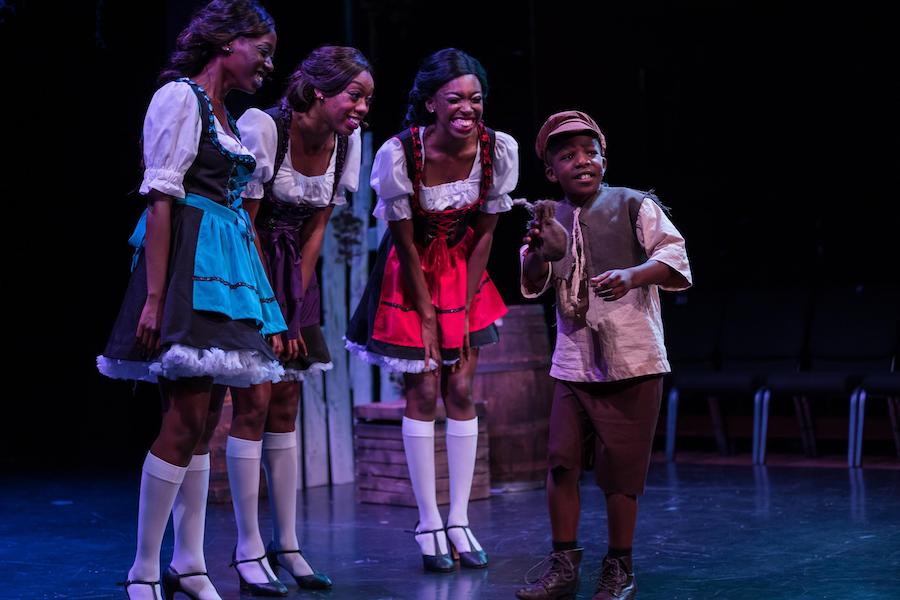 "Rockin' Down Fairytale Lane" at Westcoast Black Theatre Troupe in 2018.

“What are you doing with your nights?” I found myself asking a theatre journalist colleague recently. Indeed, for those of us who have had the happy job of attending the theatre, and writing about its artists, for a living, the pandemic lockdown has been disorienting, arguably no less than anyone employed in making it. Our workplaces are closed until further notice! And as I try to run a magazine from the same Queens apartment where my wife is trying to teach college classs, and both of us are helping to home-school two ornery young boys, I have struggled to reintroduce theatregoing habits into my life in this virtual world. I keep thinking about and quoting this tweet from the Scottish playwright of The Events and The cosmonaut’s last message:

I do love plays, plays are great, but really, one huge reason I love them, is because they allow me to go to the theatre.

I enjoyed the online Buyer and Cellar and loved the Sondheim 90th celebration, and my kids and I have dipped into at least one of these Play at Home offerings. But my inbox is crammed with so many more options. Wading through them, I see a few coming up that intrigue.

I confess I haven’t kept up with 24 Hour Plays’ Viral Monologues, which by all accounts are the gold standard of quick-fix online theatre offerings, with heavy hitters delivering short plays by heavy hitters, in an impressive and seemingly inexhaustible supply. Meanwhile other efforts are picking up on similar ideas: For short plays by and featuring luminaries and emergent talents, one could do a lot worse than check out the next installment of The Homebound Project. I missed the first two but plan to schedule some quality time for the next one, which starting streaming Wednesday, June 3, at 7 p.m., and runs through Sunday, June 7, at 7 p.m. You can get your view-at-home tickets, starting at a suggested-donation level of $10, at homeboundtheater.org , and you have that four-day period to stream—check out this lineup—a play by John Guare, directed by Jerry Zaks, and starring Jennifer Carpenter and Thomas Sadoski; Ralph Brown in a play by Donnetta Lavinia Grays, directed by Homebound founder Jenna Worsham; Diane Lane in a work by Michael R. Jackson (the mind races!); Paola Lázaro in a work by Gina Femia, directed by Taylor Reynolds; Joshua Leonard in a work by Mara Nelson-Greenberg; Eve Lindley in a work by Daniel Talbott, directed by Kevin Laibson; Arian Moayed in a work by Xavier Galva; Ashley Park in a work by Bess Wohl, directed by Leigh Silverman; Will Pullen in a work by Samuel D. Hunter, directed by Worsham; Phillipa Soo in a work by Clare Barron, directed by Steven Pasquale; and Blair Underwood in a work by Korde Arrington Tuttle. Proceeds go to No Kid Hungry, a national campaign working to end childhood hunger, for which the project has already raised $59,000.

With my kids in mind, I look to Florida’s Westcoast Black Theatre Troupe, which is streaming Rockin’ Down Fairytale Lane, May 26-June 8. Online tickets are $15 for this musical spin on the tales of Jack (of giant beanstalk fame), Snow White, Prince Charming, Goldilocks, the three little pigs, and more. The premise sounds a bit like Into the Woods, which my kids love, but with contemporary music. Ariel Blue, Earley Dean, Henry Washington, and other familiar Troupers star, with a book by Westcoast founder and artistic director Nate Jacobs and Joey James, and music, lyrics, and direction by Jacobs.

Below, my colleagues at American Theatre all have their own shelter-in-place theatre ideas. Until next time, see you on the virtual aisle.

A Way Back to Then

My family’s weekly virtual game night—with my farflung parents, brothers, and sister-in-laws all scattered across the U.S.—petered off around week six of quarantine. My mom tried so hard to retain game night, but there are only so many rounds of Drawful and Houseparty Trivia one can take. My mom loves the movie Holiday Inn, and so next week’s virtual family activity will be watching Holiday Inn the New Irving Berlin Musical on BroadwayHD. Roundabout Theatre Company’s 2016 Broadway production will be streamed for free on May 30 at 8 p.m. ET in celebration of the composer’s birthday, and available for 48 hours. And, much to my mom’s delight, there will be trivia and fun facts about the tuner on social media through #HolidayInnMusical. Long live game night.

I heard the song “A Way Back to Then” approximately one million times in the summer of 2009. I was at theatre camp when sheet music of [title of show] had just been published—and that song wafted all summer long through the Northeastern Pennsylvania campus. I can’t return to the school this summer to reminisce with my fellow campers, but the original team behind [title of show] is finding their own “way back to then” with a virtual reunion on May 30 at 8 p.m. ET. Hunter Bell, Susan Blackwell, Heidi Blickenstaff, and Jeff Bowen will host The [title of show] show Vineyard Theatre Virtual Variety Show show! The variety performance will feature special guests Bill Irwin, Cheyenne Jackson, Linda Lavin, Leslie Odom Jr. and Nicolette Robinson, Steven Pasquale and Phillipa Soo, Zachary Quinto, Brooke Shields, the Lopez Family Singers (Robert Lopez and Kristen Anderson-Lopez and their family), and more to be announced. The evening will support the Vineyard Theatre’s Campaign for Right Now. Access to the show is available with a donation of $25 or more made before May 30 at noon here.

On Monday, Wednesday, and Friday afternoons, 13-year-old Joshua Turchin hosts The Early Night Show with Joshua Turchin cabaret show on YouTube featuring home-bound Broadway kids. Turchin, who appeared Off-Broadway in Forbidden Broadway: The Next Generation and was in rehearsals for Trevor the Musical prior to the shutdown, brings together a cadre of professionals for interviews and young performers each week to perform. Guests have included wunderkinds from School of Rock, Frozen, Matilda, and more. The free show, which is also distributed as a podcast through the Broadway Podcast Network, raises awareness for the Actors Fund. Did I mention this kid plays 11 instruments? —Allison Considine

During this time of limited travel, with many people spending days or weeks in or around their homes, it’s perfectly natural to dream about visiting old haunts or exploring new places. As these pages have discussed, while avoiding physical trips virtual ones are totally fair game. Below are a couple of productions available from two theatre companies I admire, one I know well and one I haven’t had the pleasure of checking out.

I lived in Austin for a few years, and I’ve cherished each opportunity to go back. One troupe that always presents exciting work there is the VORTEX, whose sprawling and ambitious 2018 production Performance Park I attended and Jerald Raymond Pierce covered for AT. On May 31 at 7:30 p.m. CT the company will livestream Earth, a 2013 installment of the Elementals, its series of devised pieces with spiritual aims. The show, conceived and directed by VORTEX co-founder and producing artistic director Bonnie Cullum with B. Iden Payne Award-winning choreography by Toni Bravo, features songs, dances, and stories about our planet staged in the round in 17 tons of dirt. “As we embrace the power and magic of the elemental forces of Air, Fire, Water, Earth, and Spirit,” the theatre writes, “we intertwine ritual and environmental action with our theatrical art.”

While I’ve seen productions that began life or were developed at La Jolla Playhouse, I’ve been to its home base of San Diego only once and didn’t get to see any theatre while I was there. I’m in luck: Now La Jolla is offering programming online, including a digital take on Without Walls (WOW), its interactive and site-specific festival produced biannually since 2013. The series has begun rolling out shows, including commissions, starting with the world premiere of La Jolla-commissioned video installation Ancient by Mike Sears and Lisa Berger, available through June 7. The next project, whose first episode drops today, is Walks of Life by Blindspot Collective. Also a world premiere and commissioned by the company, the piece is a three-part auditory series with each half hour segment presenting characters and stories about participants’ communities while they walk around on their own. The series promises an innovative way to connect to what’s nearby while maintaining safe physical distance. —Russell M. Dembin

When I think back on my early days of living in Chicago, I shudder when I remember all the theatre I missed. Not literally, but it does suck to think about the amount of theatre I was seeing pre-coronavirus shutdowns compared to the minuscule amount I was seeing back in my first year of living in the city. One production I missed was First Folio Theatre’s Cymbeline: A Folk Musical. The Shakespearean adaptation won Joseph Jefferson Awards for best adaptation (for David Rice’s work) as well as best original music (for Rice’s work with Michael Keefe on music and lyrics). Taking a Shakespearean play and dropping it in the middle of Civil War Appalachia and then adding folk music is exactly the kind of experiment that perks up my ears these days. Somehow 23-year-old me missed the memo. But with First Folio streaming their 2013 outdoor performance of Cymbeline: A Folk Musical, directed by Michael Goldber, from June 3-14 for $20, I may finally get the chance to see one of the many, many shows I missed in those early days in the city.

Speaking of things I’ve missed, as an ardent introvert, I wouldn’t say interactive and immersive are the first words on the tip of my tongue when thinking about my next theatre venture, but during all this isolation, a little interaction wouldn’t hurt. Along those lines, San Diego Repertory Theatre’s weekly streaming project Beachtown Live!, written and directed by playwright-in-residence Herbert Siguenza, caught my eye—mostly because it seems like the right kind of mix of “come participate” and “you can sit quietly in the back and enjoy if outward participation is too much.” Siquenza’s original Beachtown brought together the residents (actors and audience included) to discuss the Beachtown Time Capsule and decide on what should be replaced in said time capsule. This virtual iteration brings the Southern California coastal community back together as they hold weekly town halls for their Road to the Future Task Force, which is charged with dealing with the challenges of getting through a pandemic. The show has the potential to be anything from enlightening to lighthearted, as Siguenza and team mix a global crisis with comedy and music. The free livestreams will happen every Wednesday beginning on June 3 at 7 p.m. PT and run through July 29. Details on how to watch and participate are still to come.

I’ve really enjoyed watching panel discussions and the brilliant minds in the theatre community talk about, well, everything recently. Last week I watched Center Theatre Group’s conversation L.A. Playwrights: Writing for a Changing World, which featured incredible thoughts from writers like Dominique Morrisseau and Jeremy O. Harris. This week, however, I’m looking forward to an installment in the Directors Lab West Connects series on HowlRound. Directors Lab West Connects is an 8-day series of streamed conversations and Q&As reflecting on and exploring different topics around theatre. On May 28, HowlRound will host Directors Lab West Connects: Scarlett Kim and Mattie Barber-Bockelman. Kim and Barber-Bockelman, programs and projects managers for CultureHub, will discuss reimagining “liveness” and “intimacy” in relation to virtual engagements and performances. As I sit and think about watching Cymbeline or Beachtown Live!, or any of the other numerous online offerings, the question of how these online offerings change how we communicate and connect repeatedly pops up. With CultureHub’s decade of examining the relation of art and artists to technology, these are voices I cannot wait to hear. The conversation and Q&A will be livestreamed on HowlRound TV at 2 p.m. ET on May 28. —Jerald Raymond Pierce