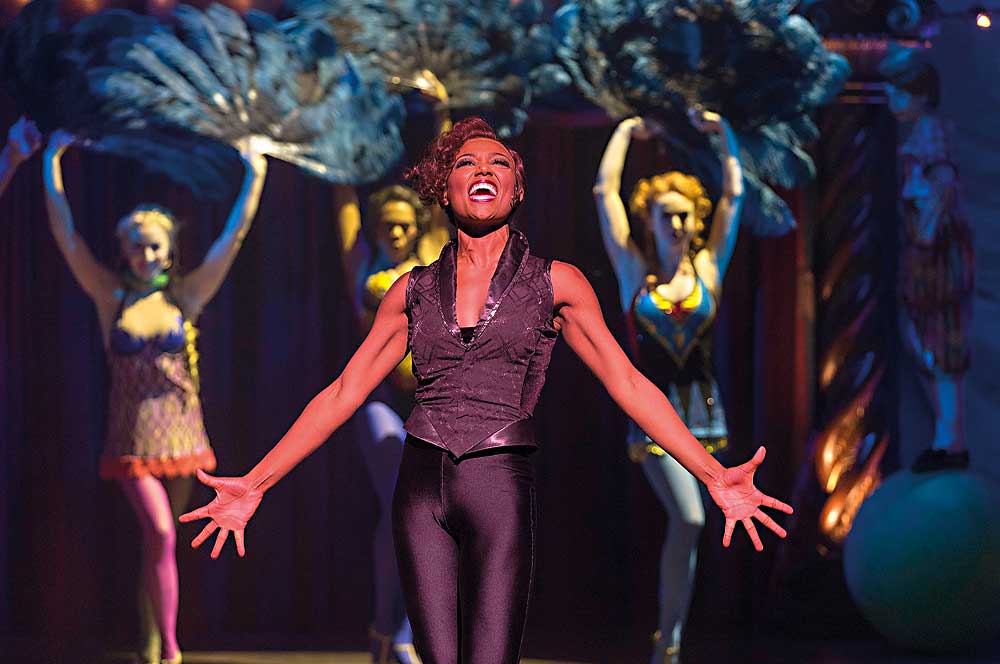 Patina Miller in Pippin at ART

For all the concern that the not-for-profits have been sullied by the filthy lucre of Broadway, perhaps the most striking aspect of the discussion is the fact that in most of these partnerships, there’s rarely a significant impact to the bottom line.

“Royalties, or in some instances profits, from shows are episodic, not continuous,” says Barry Grove, executive director of Manhattan Theatre Club, which owns and operates a Broadway venue as well as a for-profit subsidiary. “When they’re significant, as they have been in a few occasions”—he names Ain’t Misbehavin’, Proof and The Tale of the Allergist’s Wife as examples—“they’ve helped clean up the campsite from traditional and ongoing operating debts.”

“We earned more than $1.2 million from Hairspray,” notes David Armstrong, executive producer and artistic director of Seattle’s Fifth Avenue Theatre, where the John Waters–inspired musical premiered. “But it’s been $1.2 million over 10 years.”

In the best cases, those additional funds are used to prop up endeavors, including education initiatives and new-work development programs, that aren’t money-earners.

That’s the balance Todd Haimes, artistic director of New York’s Roundabout Theatre Company, tries to strike, even if some ventures can attract criticism for their obvious box-office aspirations. This season’s most likely target: the Roundabout’s Broadway return of its hit 1998 revival of Cabaret, this time starring Michelle Williams.

The not-for-profit operates three Broadway stages and two Off-Broadway spaces and frequently pairs with commercial producers, but also oversees a host of other activities, such as Roundabout Underground, which develops and stages new work in a 62-seat space that charges $20 a ticket. “Hopefully commercial partnerships will generate income for the Roundabout, and that money will go back to the theatre to fund things like Roundabout Underground, which loses a fortune,” Haimes says. “Something’s got to pay for Machinal and The Winslow Boy,” he continues, in reference to two of the theatre’s worthy Broadway revivals this season that were never likely to become big box-office draws. “These are plays that should be done, but you have to balance it with a show that has some hope of generating ticket sales for the theatre.”

For a lot of not-for-profit leadership, the uncertain monetary gain is only one attraction of a commercial partnership. Even a show that flops on Broadway can provide a booster shot of national visibility to a resident theatre.

So says Michael Kaiser, the outgoing head of D.C.’s Kennedy Center, which spurred Broadway transfers of its productions of Ragtime and Follies, the latter of which was orchestrated by the Center itself. Both productions failed to recoup in New York, but for the Center, he contends, the transfers were major successes.

“More than 60 percent of our fundraising is done outside of Washington, so there’s a real rationale for being in New York, in terms of its potential for expanding the donor base and benefitting from the national attention of a Broadway run,” he says.

The Kennedy Center’s next big musical project is director Bill Condon’s revival of Side Show, a co-production with La Jolla, where the musical played last year ahead of a summer run in Washington. After that comes Little Dancer, the latest musical written by Lynn Ahrens and Stephen Flaherty, directed by Susan Stroman. With the pedigree of the creative teams involved, both are sure to have the attention of the broader theatre world, including commercial producers.

“Those earlier Broadway transfers gave us great credibility with the creative community,” Kaiser says. “It’s why the Side Show people thought of us. If we hadn’t moved Ragtime and Follies, I don’t think some of the projects we’re doing now would have come to us.”

Susan Medak, who for more than 20 years has served as managing director of Berkeley Repertory Theatre, echoes the idea that commercial ties can yield increased access to artists, noting that Ian McKellen and Patrick Stewart would never have trod the California theatre’s boards last year had its production of Pinter’s No Man’s Land not been bound for Broadway under the auspices of a commercial producer.

But there are other advantages to such endeavors, she notes. Audiences and theatre staffs alike feel significant pride when one of the shows they embrace is validated by a successful future life elsewhere. Besides, working closely with commercial producers can also provide an important opportunity for institutional learning.

Medak remembers that the extraordinary sound requirements to mount American Idiot, the commercially enhanced rock musical by the band Green Day, prompted the entire sound department to learn new tricks. “I think that kind of thing is one of the aspects of these collaborations that have been of the greatest value to us as an organization,” she says.

In the best possible scenario, an interaction with the commercial world doesn’t sully a not-for-profit’s mission, but marks a true extension of it.

“This is a first for us,” says Bill Rauch, director of All the Way, the Robert Schenkkan play now on Broadway starring Bryan Cranston as Lyndon B. Johnson. Oregon Shakespeare Festival, the organization Rauch leads, commissioned the play as part of its American Revolutions initiative, and the show’s premiere at OSF in 2012 led to the commercial involvement of producer Jeffrey Richards, who teamed with ART for a Cambridge run before its Broadway berth.

“Most important for us, the success of All the Way gives more exposure to a play we commissioned and that we passionately believe in,” Rauch says. “It’s an extension of our commitment to create new work that contributes to the field of new American plays. A commercial expression is one way we can contribute to that dialogue.”

“Oregon Shakespeare Festival is an extraordinary operation,” raves Richards, also the producer who shepherded the Steppenwolf Theatre Company’s production of August: Osage County to Broadway accolades. “Is it on everybody’s radar? No. But perhaps now it will be.”

Commercial producers readily admit the attraction  of the not-for-profits is a financial one, allowing them to test new work in front of an audience in a run subsidized, in a sense, by the producing nonprofit. But that’s far from the only reason to do it.

“The obvious advantage is always economic, because in this economy, the model we all used years ago of taking a show out of town for a commercial tryout doesn’t quite work anymore,” says Joey Parnes, the commercial producer who scored a Tony for his Broadway transfer of Christopher Durang’s Vanya and Sonia and Masha and Spike, which originated at Lincoln Center Theater and McCarter Theatre in New Jersey. He’s also behind the much-lauded Broadway production of the musical A Gentleman’s Guide to Love and Murder, which originated at Connecticut’s Hartford Stage and played the Old Globe in San Diego prior to New York.

“If a show needs development, you put more brains behind it when you add a nonprofit,” agrees Robyn Goodman, the Second Stage co-founder and artistic producer at Roundabout Underground whose commercial career has included Avenue Q and Bengal Tiger at the Baghdad Zoo, both seeded in the not-for-profit sphere.

Combatting the image of the cigar-chomping bully, most commercial producers contend they go into a not-for-profit looking for the added input a resident theatre’s artistic staff can provide.

Thomas Schumacher, the president and producer of Disney Theatrical Group, has frequently paired with not-for-profits in order to shepherd development of Disney titles, with examples including Aida, Peter and the Starcatcher, Newsies, Aladdin and The Jungle Book.

Aida, for instance, had its first production at Atlanta, Ga.’s Alliance Theatre, at the time run by Kenny Leon. “It was my production in Kenny’s theatre,” Schumacher allows, “but Kenny sat with me every night. And I want those partners.”

Producers say that as costs rise, especially for musicals, the comparatively safe haven of the not-for-profit offers an opportunity to nourish the creation of a work in a way that a purely commercial production, subject to the pressures of the marketplace, cannot.

“The working environment of a nonprofit is an enormous plus,” Richards says. “The stakes are different. I wish I had gone to a resident theatre with The Anarchist.” That show, a new play by David Mamet that starred Debra Winger and Patti LuPone, tanked on Broadway. “I think it’s one of David’s best plays, but it’s one that defies people’s expectations of him. Opening on Broadway might not have been the best thing for it. I think it maybe needed a little bit of breathing room that a resident theatre could have provided.”