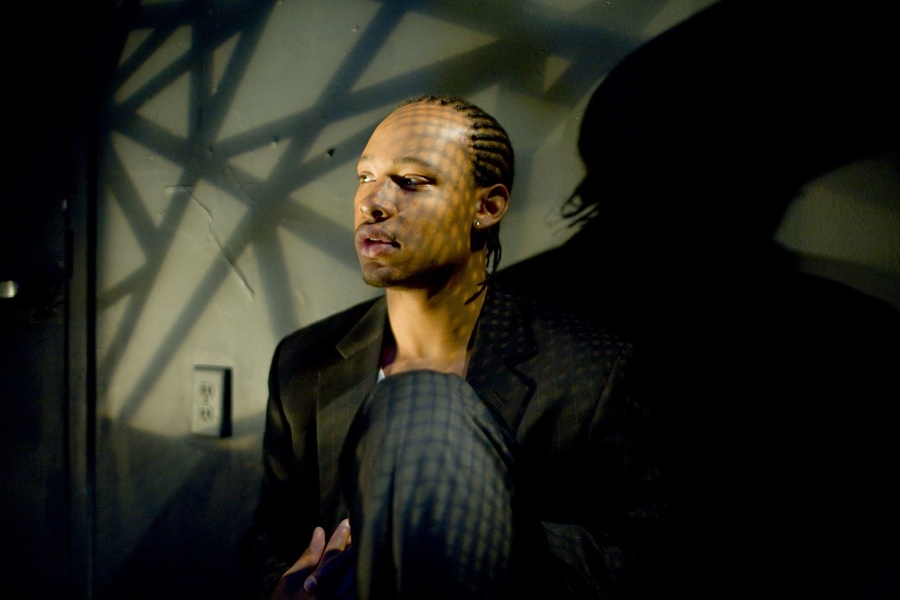 Jonathan Dent in "The Etymology of Bird" by Zakiyyah Alexander, staged at the Providence Black Repertory Company in 2008.

Why these plays now?

“Every 28 hours,” academic and journalist Dr. Marc Lamont Hill said in a debate on CNN, “Every 28 hours…every 28 hours, according to the MXGM study, a black person is killed by law enforcement, vigilantes or security …”

Immediately following the events of Aug. 9, 2014—when the unarmed Michael Brown was shot dead by police officer Darren Wilson—we worked with a group of artists from around the country to bear witness, to serve and to collaborate artistically with the community of Ferguson, Mo. We used a Facebook group, a hashtag (#TheFergusonMoment) and a blog to communicate and connect to more than 1,000 other artists and organizers around the country creating art in resonance with this moment in American history.

The breadth and depth of artistic actions around the country is inspiring. From new play commissions to community conversations, from guerrilla street performances to casts of Off-Broadway plays standing in solidarity at curtain call, theatre artists and institutions around the nation are stepping forward to join the new civil rights movement inspired by the deaths of Michael Brown, Eric Garner, Tamir Rice, John Crawford and many others (and by the failure thus far to see any indictments, let alone prosecutions for their deaths).

This December, as theatres and drama departments are deciding what plays to present in their 2015-2016 seasons, we have an unprecedented opportunity: Which plays can we program, read and teach that will be in resonance with this moment and this movement?

Inspired by the #FergusonSyllabus (a crowd-sourced list of resources and an on-going Twitter conversation for educators), we set out to create a list of plays that can catalyze the difficult but vital conversations we need to have now. We crowd-sourced a list from the Ferguson Moment Facebook group, asking specifically for plays that provide opportunities for conversation around this particular historical moment: the shooting of Michael Brown and the response to that shooting by citizens, law enforcement and the justice system, in Ferguson and in other places like it around the nation. You will find that list, in its entirety, below (many people also suggested important contextual books and articles; we’ve included a list of those, too).

For a snapshot of why some of these plays feel so critical right now, we also asked a group of colleagues to select one play from the list to introduce. Please help us continue the conversation by sharing your thoughts on the relevance of some of the other plays on the list, or suggesting additional titles, in the comments section below.

We are makers and teachers of theatre. Our choices of what plays to teach and to produce will determine the direction of the cultural conversation going forward. We can amplify often-silenced voices. We can offer our audiences perspectives they are not seeing on the nightly news. We can put current events in historical, social, political and economic context. We can challenge false narratives. We have the opportunity to lift up this movement, this moment, and this conversation.

Appropriate by Branden Jacob-Jenkins
Why this play now? Jill Dolan, Annan Professor of English and professor of theatre, Princeton University: “Appropriate is playwright Branden Jacob-Jenkins’s illustration of the intractability of racism and the way it lives on as an indelible historical memory and contemporary social practice. By writing a play peopled with only white characters—a family who visits their recently deceased patriarch’s homestead in Arkansas, only to uncover the remnants of a his proudly racist past—Jacob-Jenkins puts the responsibility for social injustice where it belongs: at the feet of the powerful, white middle-class family who want, more than ever, to believe that they’re removed from a past that nonetheless stains their family’s history and its present. In a brilliant theatricalization of hierarchical social structures in which straight white men continue to come out on top of the heap of power, Jacob-Jenkins persuades us to consider the genetic core of racism, which erupts like clockwork, despite the American mainstream’s desire to consider it past.”

Force Continuum by Kia Corthron
Why this play now? Michael John Garcés, artistic director, Cornerstone Theater Company:  “Force Continuum elucidates the pernicious causes and vicious outcomes of brutality in this country through the story of three generations of African-American police officers torn apart by the very organization to which they have dedicated their loyalty and working lives. Regardless of the deep belief in humane, community-focused service that has been passed down from generation to generation, their faith is undermined by the deeply ingrained, institutionalized racism of the police force and the inevitable, officially sanctioned violence that results. With great empathy and considerable humor, Corthron is able to depict the officers and their colleagues unsparingly with a critical eye without dehumanizing her characters or stripping them of their dignity. This nuanced and delicately balanced play is, unfortunately, as timely now as it was when first produced (in 2001), an unsentimental but deeply felt story of tragically flawed human beings trying to do the right thing in difficult circumstances and getting it very, very wrong.”

Hands Up: 6 Playwrights: 6 Testaments by Nathan James, Nathan Yunberberg, Idris Goodwin, Glenn Gordon, Dennis Allen II, Eric Holmes
Why these plays now? Kirsten Greenidge, playwright, assistant professor of theatre/playwriting, School of Theatre, Boston University: “Commissioned by the New Black Fest after the shooting of Michael Brown, Hands Up consists of six monologues written by six emerging black male playwrights, exploring their feelings about the well-being of black men in a culture of institutional profiling. We talk a lot about diversity and silenced voices in the theatre, and one set of voices that often gets silenced and overlooked is that of black male playwrights. I don’t know where I’d be without James Baldwin, Amiri Baraka, Ed Bullins and August Wilson having come before me, and yet so many of the programs meant to cultivate new voices put an emphasis on female voices or female voices of color. There is room for everybody at this table, so the answer is not to discontinue any programs, but recognize these voices are imperative if the deaths of black men in this country at this moment—such as Trayvon Martin, Michaal Brown, Eric Garner and Tamir Rice—are not to be in vain.”

Ed. Note: Also on the list below is Facing Our Truth, for which the New Black Fest commissioned six very diverse playwrights to write 10-minute plays in response to the George Zimmerman verdict.

Father Comes Home From the Wars, Parts One, Two and Three by Suzan-Lori Parks
Why this play now? Suzan-Lori Parks, resident playwright, Public Theater: “Because past is prologue.” Ed. Note: Parks’s play, set over the course of the Civil War, premiered at the Public Theater this past fall, and will next appear the American Repertory Theater in late January.

The Mojo and the Sayso by Aishah Rahman
Why this play now? Daniel Alexander Jones, interdisciplinary artist and performer, professor of theatre, Fordham University: “Aishah Rahman was a young mother when 10-year old Clifford Glover was shot in the back and killed by the NYPD in 1973; he and his stepfather (both unarmed) had fled from undercover police believing the unidentified men were about to rob them. After Glover’s death, the officer who shot him was acquitted. Rahman wrote The Mojo and the Sayso years later; it follows the story of a family—father, Acts, mother, Awilda, and brother, Blood—coping with the aftermath of their son/brother Linus’s murder by police. Rahman is the godmother of the theatrical jazz aesthetic, and The Mojo and the Sayso is a powerful rite with language that shakes the bones, with deft attention to her characters’ churning sea of emotions. Rahman’s dramaturgical mastery results in a play that unflinchingly exposes our fragility, yet reminds us of the incalculable strength to be found through our courageous vulnerability with one another.”

Party People by Universes (Steven Sapp, Mildred Ruiz-Sapp, Ninja)
Why this play now? Bill Rauch, artistic director, Oregon Shakespeare Festival: “Party People is one of 37 new plays that are being commissioned and developed at the Oregon Shakespeare Festival to examine moments of change in United States history; many of these plays have themes that relate to what is happening in our society right now. The world premiere of Party People was in 2012, running alongside the world premiere of Robert Schenkkan’s All the Way, another significant play about Civil Rights that is available for production (after having won the Tony Award for Best Play of 2014). Party People deals with the history and legacy of the Black Panthers and the Young Lords in a dynamic piece that bursts with poetry, politics and music. In its latest production at Berkeley Rep, Party People found a way to weave in references to Eric Garner, Travon Martin and Mike Brown.”

The Warmth of Other Suns by Isabel Wilkerson and The New Jim Crow by Michelle Alexander
Why these books now, alongside these plays? Michelle Hensley, artistic director, Ten Thousand Things: “These two books, both beautifully and powerfully written, make essential, life-altering reading that will utterly change the way you see race in our country. Both books make it inescapably clear that ever since the end of slavery, systems have been very deliberately put in place to ensure that its racial oppression continues in ‘more acceptable’ forms. Wilkerson, through her interviews with over 1,200 of the six million Americans who were forced to migrate from the South to the North from 1918 to 1970, describes the terrors of Jim Crow in ways that have never been fully understood. And Alexander makes it absolutely clear that the mass incarceration of African-American men is a system consciously created, beginning with the Reagan Administration’s War on Drugs, to continue the control  of African Americans, particularly after men are released from prison, in ways that are little different than slavery. You will be devastated but forced to admit that the systems of hatred that sustained slavery are still very much alive and that very little has really changed at all.  Every American must read these books.”

Complete list of plays, with links to find them (where available):

Suzan-Lori Parks, The Death of the Last Black Man in the Whole Entire World and The America Play and Father Comes Home From the Wars (Parts 1, 2, and 3) and In the Blood
Aishah Rahman, The Mojo and the Sayso
Robert Schenkkan, All the Way
William Shakespeare, Measure for Measure
Ntozake Shange, Spell #7 and For Colored Girls…
Ted Shine, Contribution
Gillian Slovo (from spoken evidence), The Riots
Anna Deavere Smith, Twilight: Los Angeles, 1992 and Fires in the Mirror
Universes, Party People
August Wilson, Gem of the Ocean
George C. Wolfe, The Colored Museum

Further reading:
“The Case for Reparations” by Ta-Nehisi Coates
The New Jim Crow by Michelle Alexander
The Warmth of Other Suns by Isabel Wilkerson
Living with Lynching: African American Lynching Plays, Performance, and Citizenship, 1890-1930 by Koritha Mitchell
“Why We’re Pissed Off: Ferguson By The Numbers” by Nathan Leigh
“The Science of Why Cops Shoot Young Black Men” by Chris Mooney