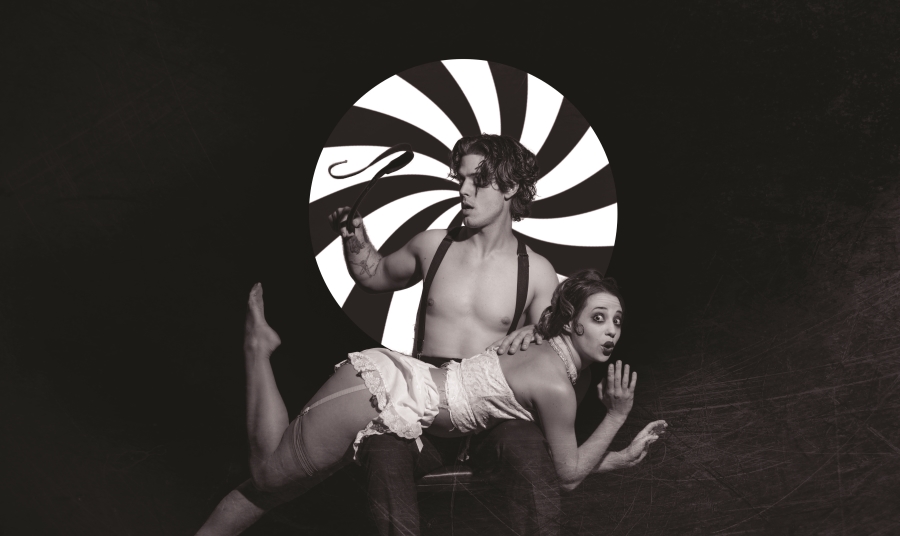 Aaron Strand and Stephanie Lloyd in "The ThreePenny Opera" at 7 Stages. (Photo by Stungun Photography)

“You are watching a play.”

Brechtian anti-immersion gets an upgrade in 7 Stages’s The Threepenny Opera (Sept. 9-25). Using live-feed video projection, director Michael Haverty aims to suggest the grimy aesthetic of German expressionist cinema, notably Weimar-era filmmakers Fritz Lang (Metropolis) and Robert Wiene (The Cabinet of Dr. Caligari)—the kinds of films that were in theatres when the Brecht/Weill piece premiered in Berlin in 1928.

“Visually it fits with Brecht’s style of alienation,” notes Haverty, who is also co-artistic director of 7 Stages. “Brecht didn’t have digital projectors, but he was using similar techniques by putting curtains and text onstage—it breaks you out of getting lost in the world.”

In Haverty’s staging, audiences see the cameras onstage, set up like antique film cameras, and experience the projections being created in real time. There’s an opening credits sequence where the actors pose above cards with their names on them, and projections are layered over the stage in an imitation of film “dissolves.”

In taking cues from expressionism, Haverty and company hope to blend artifice with grit. He says that early expressionist cinema is “a lot darker and unsettling because it seems more real.” At the other end of the spectrum, he’s trying “to be careful not to slip into the Tim Burton realm,” instead injecting a flavor of the fantastic into the realism rather than the reverse.

For Haverty, who has a background in puppetry and design, it’s all about creating a world that is propped up in full view and doesn’t hide the seams: “There are slits and cracks in the set; you can see inside the dressing rooms. Actors are visible when they’re changing.” Erasing the possibility of immersion, he says, is faithful to Brecht, and asks the audience—not the characters—to draw moral conclusions.

“I feel like Atlanta is dying for something like this,” says Haverty. “There’s a quote from Brecht: ‘There will be singing about the dark times.’ That’s our mission. We feel that this is a great way to bring out a blockbuster musical that also really speaks to the troubles that are going on in our world and in our community.”

But it’s not all doom and gloom. Somewhere amid the shadows of Brecht’s onstage world lies a seed of hope. “I think there’s hopefulness in the show,” Haverty says. “It’s saying, ‘Listen to people who are crying out in pain. If you listen and hear them, there’s a chance you can make a change.’”

Haverty continues: “It’s really about a community of people who are stuck in a system. They’re stuck in positions within that system that cause them to commit crimes and live their lives the way they do. There’s a line where Macheath says: ‘What’s the robbing of a bank compared to the founding of a bank?’”

Now, if only there were a high-profile businessman today who could tweet an uncouth answer to that question…