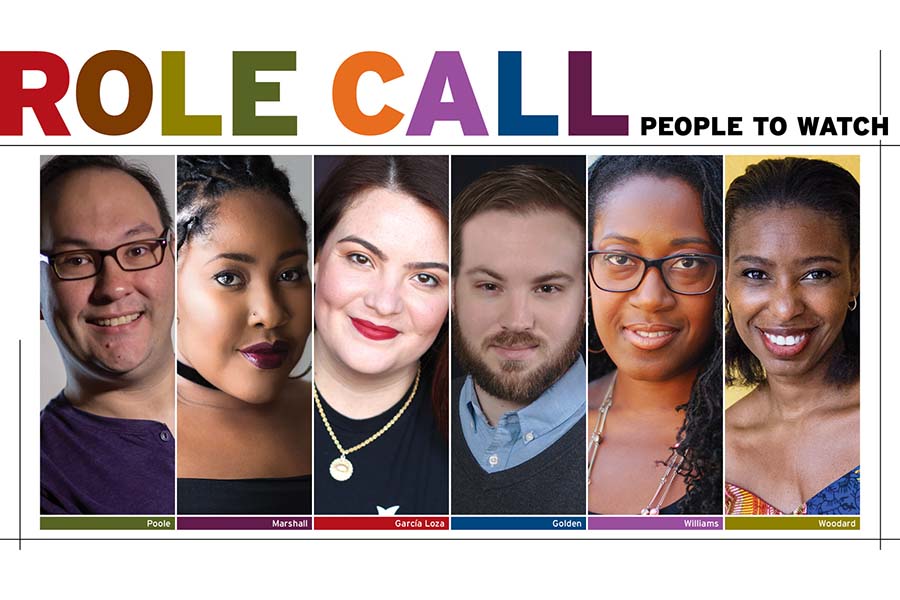 Profession: Designer, artistic director, professor
Hometown: Catskill, N.Y.
Current home: Savannah, Ga.
Known For: Poole is the artistic director and founding member of the Savannah’s Collective Face Theatre Ensemble, where he’s helmed and designed such productions as Equus, Grey Gardens, Death of a Salesman, Jesus Christ Superstar, 9 to 5, Pygmalion, Cat on a Hot Tin Roof, and The Savannah Sipping Society.
What’s Next: Collective Face’s take on The Great Gatsby in March, and their staging of August: Osage County in May.
What Makes Him Special: Eric Salles, a Collective Face ensemble member, says that Poole’s “set designs have taken Savannah audiences by storm.” Behind the scenes, Salles says, Poole is “always educating people and getting them excited about doing theatre.”
Expect the unexpected: “My mantra has always been, ‘Take risks, make mistakes, and have an epiphany or two.’ I don’t allow for the word ‘can’t’ in anything in my life.  When the word ‘can’t’ is used I combat it with, ‘You wanna bet?’ I always root for the underdog.” The theatre he strives for, Poole says, “has an impact on society: the theatre of the unexpected and risky, that touches us and forces us to question our sensibilities. I like theatrical forms that can be reimagined; performances that include the notion of storytelling; and the importance of creating an experience that doesn’t segregate the connection between the audience and performance, or the artist and the voyeur.”

Profession: Director/choreographer, playwright, creative consultant
Hometown: Westbury, N.Y.
Current Home: Durham, N.C.
Known For: Marshall doesn’t just do theatre, she does cultural work in a city rich with black history by hosting dance parties and dinners, facilitated through a public art program called Black Joy PopUP, and as the founding artistic director of MOJOAA Performing Arts Company.
What’s Next: Next fall MOJOAA will present Escape to Freedom at Mordecai Historic Park, the fourth time the company will bring this interactive, immersive production to the former plantation.
What Makes HER Special: “I’ve been immensely drawn to and empowered by Monét’s generous and inimitable artistic style, her commitment to liberation, unapologetic blackness and queerness, healing, joy, and radical self-love,” says JaMeeka Holloway-Burrell, an artistic partner and a friend. “Whether through her work as a playwright, performer, director, or community curator, Monét ensures that you are seen and that somebody in the world is thinking of and creating just for you.”
Everything is a performance: “As a black theatre artist, I see performance everywhere, and it is glorious,” the artist says of herself. One example: “The brother ‘milly rockin’ at the bus stop to the elder clapping her hands and stomping her feet at praise and worship. When my mother does my hair it is a holy ritual, and I want the art I create to reflect that.”

Profession: Producer/playwright
Hometown: Berwyn, Ill.
Current home: Chicago
Known For: She is the co-creative director of the Alliance of Latinx Theater Artists (ALTA) in Chicago (where she produces its public play reading series El Semillero), a steering committee member of the Latinx Theatre Commons, and an artistic associate at Teatro Vista in Chicago. As a playwright, a newer title for her, García Loza’s work includes Eckhart Park Echoes (for Collaboraction’s Peacebook Festival).
What’s Next: In 2018, Collaboraction will present García Loza’s Jets, Sharks, & Becky’s, “a new short play on whitewashing practices in the theatre community,” and El Semillero will present a reading of Hollywood G.T. Oh.
What Makes Her Special: Isaac Gomez, who works with García Loza as co-creative director of ALTA and cofounded El Semillero with her, raves about his longtime friend’s writing, saying, “Nancy’s voice is one of the most crucial in the American theatre. Pulling from pivotal lived experiences with her family (both past and present), she centers her stories on the experiences of Mexican women—the good, the bad, the ugly, and everything in between.”
On the border: García Loza’s parents immigrated to the U.S. from Mexico in the 1970s, and her work explores both identities. “Often my stories smash preconceived notions of Mexico-U.S. biculturalism, especially upending problematic narratives and ideas of the ‘model immigrant,’” she says. “I reject notions of living on the hyphen, or in a state of ‘border binaries.’ I abandon writing from a place of ‘ni de aquí, ni de allá,’” (neither from here, nor from there), “but rather in a state of border fluidity in which I reclaim my pocha status, where I am tied to both of my countries, always and at the same time.”

Profession: Scenic designer
Hometown: Bismarck, N.D.
Current Home: Washington, D.C.
Known For: Golden serves as director of production at NextStop Theatre Company in Northern Virginia, where he also designs about half of the mainstage shows. He also designs at Bristol Valley Theater in Central New York, Thunder Bay Theatre in Northern Michigan, and Ozark Actors Theatre in Central Missouri.
What’s Next: Scenic design for Godspell and Bad Jews at NextStop, 1984 at Carroll Community College in Northwestern Maryland, and Robin Hood and The Odd Couple at Thunder Bay Theatre.
What Makes Him Special: Thunder Bay Theatre artistic director Jeffrey Mindock effused about his resident designer, “Above all else, Jack is a collaborator. Jack’s focus is always on making sure that the best work is being produced, not just his own.” As for his own work, though, Golden’s design work, Mindock says, is “innovative and evokes the essence of each production in a way that separates him from his peers.”
Applying himself: When, through an acting class at a community college in Bismarck, where his major was economics, Golden heard about a theatre scholarship barely no one else had applied for, he gave it a shot and won it. What he found, he recalls, were “mentors who taught me a passion for collaboration and problem solving. Needless to say, I quickly changed majors!” What keeps him going in theatre is the continual challenge: “We always get to try new things and continue learning, and to do that while collaborating with new friends and old friends alike is a real gift.”

Profession: Director, administrator, and teacher
Hometown: Bridgeton and Vineland, N.J. (“Two small towns in South Jersey–best place on earth!”)
Current Home: Boston
Known For: As associate artistic director of Company One Theatre, Williams says she’s best known for productions there of “work that challenges and provokes,” including Branden Jacobs-Jenkins’s An Octoroon and Jackie Sibblies Drury’s We Are Proud to Present…
What’s Next: She’ll direct Tarell Alvin McCraney’s Wig Out! at Company One, April 27-May 13.
What Makes Her Special: Williams first collaborated with playwright Lydia R. Diamond when Williams helmed Company One’s 2007 staging of Diamond’s adaptation of Toni Morrison’s The Bluest Eye, and they most recently worked together on Williams’s production of Diamond’s Smart People at Ithaca, N.Y.’s Kitchen Theatre Company earlier this season. Diamond praises Williams for her “crackling intellect, wicked sense of humor, wildly impressive work ethic, expansive imagination, visually stunning aesthetic, collaborative generosity, I could go on.” Diamond adds, “All I know is that you give Summer a play, and she will knock it out of the park, every time. No tricks…just impeccable artistry, a passion for making the work soar, and the skills to pull it off. I’m so glad people are taking notice. All of us lucky enough to work with Summer ‘noticed’ a long time ago!”
Forging frontiers: Williams says she’s “all about forging a new frontier in American theatre,” one that “centers voices not often heard or stories that remain untold; allows me to direct plays about people of color (because I want to, not because as a black female director they think it’s all I can do); casts out old systems, and is ready to make theatre more relevant and accessible to all.”

Profession: Director
Hometown: Houston
Current Home: Brooklyn
Known For: Woodard directed James Scruggs’s 3/Fifths, an immersive performance about race set inside of a carnival at 3LD Art & Technology Center in NYC. And she just wrapped up Miami Motel Stories, by Juan C. Sanchez, set inside the historic Tower Hotel in Miami’s Little Havana.
What’s Next: She’ll mount Leila Buck’s American Dreams at Cleveland Public Theatre (Feb. 8-March 3), a live game show in which the audience will choose the favorite among three contestants competing for the prize of U.S. citizenship at each performance.
What Makes Her Special: Anne Hamburger, who worked with Woodard on En Garde Arts’ site-specific performance festival BOSSS (Big Outdoor Site Specific Stuff), called Woodard “endlessly inventive and beloved by the many people she works with, who admire her creativity, ability to create a cohesive ensemble, and inventiveness.”
Lead cheerleader: Woodard finds her inspiration in audiences. “The oohs and aahs, the leaning forward into the work, the look of astonishment, surprise, curiosity when they come out of a room or around a corner in an immersive work, the willingness to participate and make believe with us,” she says. “All of that fuels me and inspires me to translate that level of intimacy and shared storytelling to more traditional stages also.” What is her role in the mix? “To unearth the most useful tools to tell a given story and to inspire the team of collaborators towards the clearest most profoundly true articulation of the work,” she says. “I set a vision, or bring forth a collective vision. Inside of a process I am the pace setter, the editor-in-chief, and the cheerleader.”