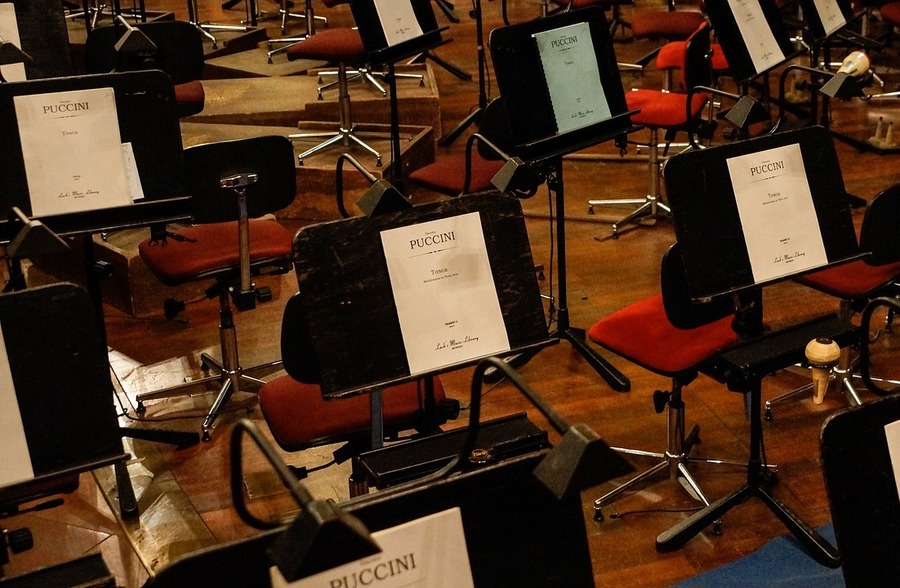 Heather Boehm wears many hats. First and foremost, she’s a musician who spent more than three years playing violin in the pit orchestra of Broadway in Chicago’s production of Hamilton. She is also vice president of the Theatre Musicians Association (TMA), one of five sections (or player conferences) within the American Federation of Musicians (AFM). TMA works on issues specific to theatre musicians, whether they’re on Broadway, on tour, or in regional theatres.

Boehm—who is president of TMA’s Chicago Area chapter and runs Choice Music Chicago, which contracts musicians for events and television—also recently became an adjunct professor at DePaul University, where she teaches a class called Music Business From the Performer’s Perspective. But no class could have prepared Boehm for the events of the last three months. Like so many in the theatre industry, pit musicians saw their livelihoods come to a screeching halt with the spread of COVID-19 and the subsequent shutdown. Most musicians have been left in a position where they have no income or health coverage. “Almost every musician has had some kind of loss,” she said.

Boehm had one saving grace, however: While most producers let their musicians go without any pay or benefits, Hamilton promised to pay its musicians’ healthcare premiums for the duration of the shutdown.

Chicago-based musical director and educator Doug Peck wasn’t as fortunate. He was supposed to be working with Gustavo Dudamel and the Los Angeles Philharmonic on their production of Sunday in the Park With George. Rehearsals were to begin April 13, with performances in May at the Walt Disney Concert Hall in L.A.

“That was my big COVID-19 gig loss,” Peck said, “but there have been so many others, not to mention the loss of opportunities I didn’t even know about. In the music and theatre worlds, we know about some projects in advance, but often, wonderful opportunities come unexpectedly and quickly.”

Boehm herself was preparing for the Goodman Theatre’s new musical, an adaptation of the 1967 novel The Outsiders. The show was to begin previews at Goodman on June 26, but has now been postponed by a year.

Even with healthcare help from Hamilton producers, Boehm is struggling with no income for the foreseeable future. She and Angela Chan, director of TMA’s Traveling Musicians chapter, have been charting just how many musicians are in a similar situation or worse. The two are tracking the exact number of musicians who were out on every show, the status of their healthcare payments, and the state of their payments.

“I have two different spreadsheets and Google Docs that are tracking the impact of this,” Boehm said. “The first one is the local one, and the second one tracks it for the entire country.”

Though she preferred not to share the numbers she’s collected, Boehm was happy to talk about trends she’s noticing. For one, it seems that while theatres and producers wait for state, federal, and municipal guidelines to come down, shows that were supposed to run through July or August or September—on Broadway, on tour, or regionally—are simply closing early. Broadway has already seen a long-running Disney hit, Frozen, close permanently as a result of the pandemic. Other shows, she reasons, may hope to resume at the end of the year at the earliest.

She has been hosting Zoom webinars, putting musicians in touch with employment lawyers. The process is complicated, because a lot of them are a combination of W2 and 1099 classified employees. Filing for unemployment requires a specific method for each of these classifications and can be very difficult.

Musicians who were on tour are in an especially tight spot because they have to file for unemployment in the state where the touring company was based, which can be a difficult and inconvenient process. According to Boehm, COBRA subsidies are critical for musicians, and she is campaigning to have them included in the next federal stimulus bill.

Some musicians who were on tour also found themselves separated from their primary source of income, their musical instruments, which had been shipped ahead of time. Some still don’t know the location of their instruments, many of which are at the mercy of theatre company trucks—and the changing weather.

“We had one musician who told us that they called the company and they said, ‘Well, we don’t know if the truck is in Canada or California right now,’” said Boehm. The difference matters: Fluctuating temperatures and humidity can pose a danger to instruments.

Dana Lyn, a New York City-based freelance instrumentalist and a composer, was playing in the orchestra of Hadestown right before the lockdown went into effect. She was also planning her next album, funded by the New York Film Academy. Lyn’s contract is through the AFM’s Local 802 (New York City), which means that she did retain benefits such as pension and paid sick days.

Healthcare, however, is another story. Her health plan comes from a fund set up by the AFM 802 which participants and employers pay into, and is administered by Aetna. As per union policy, an artist has to play a certain number of shows to qualify for health insurance. With a lockdown that started in the middle of March, this has been difficult for many musicians.

“We’re currently hoping that we can get COBRA subsidized by another government bailout,” Lyn said. “We’re still waiting to see if that’s going to happen.”

Tino Gagliardi, assistant to the international president and international representative of the Eastern territory for AFM, said that there was very little they could do to ease the situation for their members.

“There’s no force majeure clause in the AFM agreement for the musicians,” said Gagliardi, who served as the president of New York City’s Local 802 from 2010 to 2018. “So we bargained for a short window of benefits for them so that they could be paid, until April 12, their health benefits. But at this point in time, nobody’s getting anything.”

With so many unknowns, planning or thinking about a future seems difficult. While Lyn knows that her Broadway job will eventually come back, when it will come back depends on any number of variables, primarily safety concerns. Her entire musical life is at a precarious point. Will smaller music venues and theatres survive? Will people come out to listen? What will touring look like?

“Things weren’t easy before the pandemic hit either, for those of us making records and figuring out how to release our projects into the world,” said Lyn. “I can’t wait to get back to working on my album, but I have no idea when it will be safe to rehearse or when recording studios here will open up.”

Meanwhile, Chicago-based violinist Carmen Kassinger spent her time before the shutdown playing for the Chicago Philharmonic, Chicago Sinfonietta, and a number of ballet schools. All of these jobs are now gone. “As a musician, my sense of self is wrapped up so keenly in my ability to communicate artistically,” said Kassinger, who described the current state as “devastating monetarily, personally, and even existentially.”

Her day now revolves around caring for her elderly mother in the absence of proper healthcare. She gets up early to help her mother to the bathroom, bathe her, dress her, feed her, and give her medication. She cleans her house, puts her to bed, and tries to keep her morale up by playing YouTube videos of Beethoven’s Ninth Symphony.

Apart from that, Kassinger teaches a few Zoom classes and tries to practice and record her instrument while her mother rests. It’s a full-time job, but she’s glad for the time she can spend with her mother. For now, she hopes the world will come back reinvented.

“I weep every time Mom and I listen to the slow movement of Beethoven 9, something I’ve played so many times,” she said. “It is impossibly beautiful—perfection and a sense of inevitability in a world of complete uncertainty. I hope I get to do it again.”