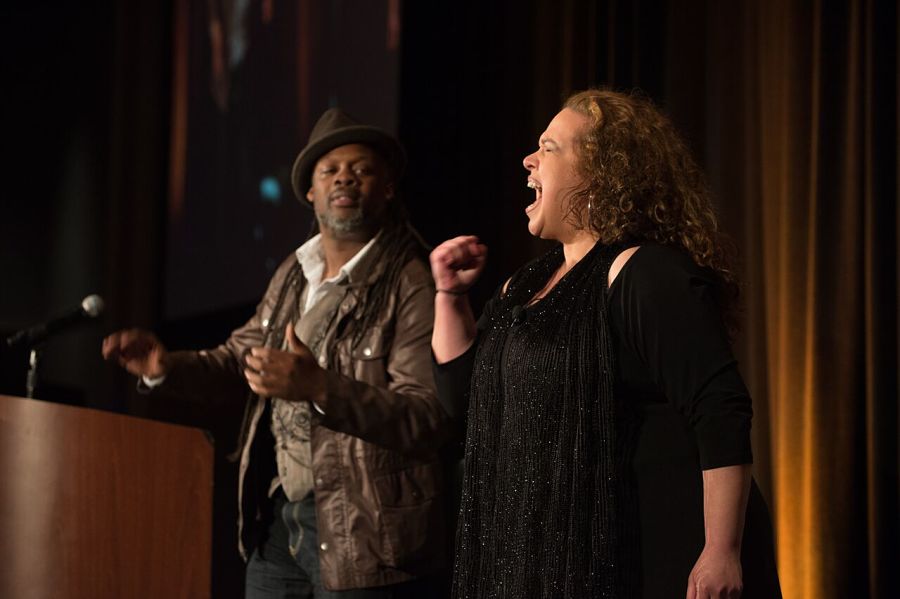 Steven Sapp and Mildred Ruiz-Sapp of Universes at the 2017 TCG National Conference. (Photo by Jenny Graham)

Although Steven Sapp was supposed to have graduated from Bard College the year before, in 1988 he realized he was eligible to stay in school longer by joining the theatre department. On the first day of school one of his friends introduced him to a new student, freshman Mildred Ruiz. “She looked up, I thought, Oh my God, and was smitten,” Sapp remembered.

Ruiz felt similarly—Sapp, she said, was “a cutie patootie”—but her experience at Bard otherwise started with nerves and anxiety. “I was horrified,” she said. “I was no longer in the city, no longer in the projects…I couldn’t believe my parents had just left me there.”

When Steven was putting together his senior project, Purgatory—a piece, coincidentally enough, about being from an inner-city community and going to a private school—he put out a casting call inviting any student of color, whether they were acting majors or not, to audition. When Mildred, who in the past had only starred in church plays, showed up, Steven again thought, Oh my God, thrilled to see the girl he’d noticed previously and excited to see what she would do. “I’m going to sing a song,” declared Mildred, and burst into “Cruces boricuas en Vietnam,” a moving bolero about a Puerto Rican soldier who dies in the war.

“You know this has nothing to with my play,” Steven told her. Mildred said she knew; she had purposely chosen not to do a musical theatre piece to “show him who I was,” she recalled, laughing. After her song, Steven turned to his assistant and said, “She’s in the play—I don’t know what she’s doing, but she’s in the play.” The two have been inseparable since.

At first glance, they seem like a mismatch. Ruiz came from a Puerto Rican family that raised her on boleros and rosaries on the Lower East Side; Steven grew up in the South Bronx with a family that had immigrated from Antigua and lived in the projects. That the two of them met in the first place defied the odds; that they met in a school were they were among just a handful of people of color seemed like kismet. That they would go on to create Universes, a multicultural troupe that has been creating groundbreaking theatrical work for almost three decades, is nothing short of miraculous.

In many ways, this coming together of people from two different cultures, from opposite sides of New York City, seems like a happier version of West Side Story, the classic musical that recently brought Universes unwanted attention when a journalist “broke the news” about a project they were working on, suggesting they were writing a “sequel” to the Broadway musical, freshly in headlines thanks to the recent film version from Steven Spielberg.

The piece they’re working on, titled Maria, is a commission from Long Wharf Theatre, and indeed an initial press release described the piece thus: “A response to cultural appropriation in West Side Story, the new musical focuses on what happens to Maria after the original musical concludes.” As Steven and Mildred explained to me, though, they conceive of Maria as a way to explore the aftermath of Hurricane María in Puerto Rico, as seen through the eyes of a woman who has experienced a trauma similar to that of the musical’s heroine—a young woman who learns that she entered a world where she was unwanted, where she would lose everything she loved. There was an element of truth to the first part of the description, though: With Maria, Universes intends to reclaim the way stories about specific communities are made without their consent, not to mention stories that white culture specifically tells them they have no right to have an opinion on.

The people who read about a “sequel” and angrily raised their voices to express their distaste for a play no one has yet seen—not even its creators—might be shocked to learn that the members of Universes don’t hate West Side Story. Mildred owns a vinyl recording of the 1984 version with the voices of José Carreras and Kiri Te Kanawa—a historic document, because it was the first time composer Leonard Bernstein conducted the piece. And Steven grew up watching the film on television, and told me, “I remember thinking the combination of the music and seeing communities in the streets was incredible.” He even bought a novelization of the musical, which he described as a “precious” belonging.

But rather than paying homage to, adapting, or messing with West Side Story, what Universes is doing is using it as a reference point. Love it or hate it, the musical is a referent for how Americans view Puerto Ricans (who are in fact Americans too) and for how the country responds to immigrants more broadly. In all their work, Universes has made a point not to worship idols, but instead to show different dimensions of what people can be. In their piece Party People, for instance, which is centered on the Black Panther Party and the Young Lords, Universes knew they couldn’t take sides or include every story they wanted to tell. So instead they created composite characters who shared facts and experiences from real-life subjects, with stories Universes have accumulated throughout their lives. This approach to storytelling often leads to the unlikely meeting of the specific and universal. Panthers would see Party People and say, “Oh, this is me!” Sapp said, only to then realize, “Wait, that’s so-and-so’s story!”

“From the beginning we’ve surrounded ourselves with community,” explained Mildred, “through community building and feeding.” They create collectively, with every member of the company invited to bring their stories. “We become guests in their houses,” she said. The two recalled how, while they were creating their first piece as Universes, The Ride, they spotted a woman standing in the rain as they drove across Major Deegan Expressway. They turned to each other in sync, as if to say, “Did you see that?” and then they invited their collaborators to imagine stories about the stranger.

It’s no surprise that many of their collaborators call them Mom and Dad—“not always for good reasons,” said Sapp with a laugh. The two have always made it their mission to create welcoming environments, whether it’s through The POINT Community Development Corporation (which they built from scratch in order to establish a place for artists like themselves to grow and experiment) or through their theatre work, which are infused with an inexplicably inviting energy. When I saw Party People, after the 2016 election, it turned my mood from mournful to exhilarated.

One might think of the work of Universes as a mantelpiece where Steven, Mildred, and other core members (William “Ninja” Ruiz, Gamal Abden Chasten) display their collective memories, like photographs that tell not only their story, but that of the people who came before them, their ancestors, and those yet to come. When Maria eventually comes out, it will be yet another reminder of how a love story that started three decades ago has led to the creation of a family.

Jose Solís (he/him) is a frequent contributor to this magazine.