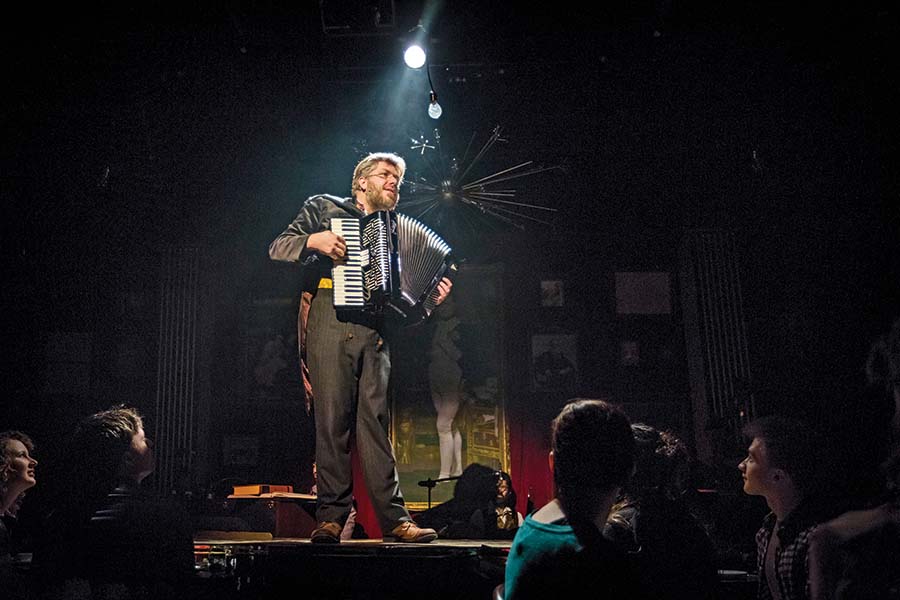 Dave Malloy in "Natasha, Pierre & the Great Comet of 1812" during the show's Off-Broadway run. (Photo by Chad Batka)

When a rock star does theatre, it usually means a side project or a new direction for a well-established recording artist: Sting or Cyndi Lauper trying their hand at Broadway songwriting, Pete Townshend or Billie Joe Armstrong staging concept albums, Sebastian Bach going into Jekyll & Hyde.

But what if the theatre bred and fed its own rock stars? What if we had a rabble of raucous, irrepressible musical auteurs who could hold their own in an indie band or a hip-hop studio or even an arena rock concert, but who have instead made theatre their main medium? Increasingly we do: folks like Lin-Manuel Miranda, or Stew, or the Lisps’ César Alvarez, or the Bengsons, or Sky-Pony.

Dave Malloy belongs in this company, as well as in a class of his own. Bearish, blond, and bearded, the 41-year-old Malloy has a whiff of the 19th century about him, as if he sprang to life from a daguerreotype or a pencil sketch, which may be one reason he’s always looked eerily at home decked in the spectacles and rumpled suit of Pierre, the accordion-toting narrator of his form-breaking, Tolstoy-riffing musical Natasha, Pierre & the Great Comet of 1812 (now on Broadway with pop bari-tenor Josh Groban as Pierre, though Malloy will pop back for a few weeks in May and June into the role he created in the show’s earlier Off-Broadway incarnations). His music for the theatre, though, doesn’t sound like your grandfather’s musical theatre—or rather, it sounds a bit like what might result if your grandfather’s record collection got shuffled into a Spotify playlist alongside Tom Waits, Arvo Pärt, Arcade Fire, Dirty Projectors, Thelonious Monk, Shostakovich, and any number of assorted jazz, country, singer/songwriter folk, world music, and electropop tracks.

Malloy’s capacious sonic palette isn’t mere channel-surfing eclecticism, though. Said director Ellie Heyman, who recently directed Brooklyn’s Pipeline Theatre Company revival of Beardo, a 2011 musical Malloy wrote with playwright Jason Craig, which samples a wide array of unexpected sounds and styles via a string quintet, a few guitars, and a 26-member chorus, “The shifts in music are so much about the shifts in dynamics of the characters and the situations.”

Indeed, it’s the dynamic range of Malloy’s music that sets it apart—from its delicate, ghostly filigrees to its thundering or thumping extremes, and every register in between. His artful balancing of pulsing electronic beats and breathy acoustic instruments—Malloy, almost alone among Broadway composers, does all his own orchestrations—isn’t just sonically diverting. It is also inherently theatrical. Its range can do things in a room, and you have to be there to feel it.

To put it another way, there’s a sense in which Malloy plays the theatre space itself as a kind of instrument: in a lavish oblong tent called “Kazino” that Great Comet producers constructed for its downtown dinner-theatre run back in 2013; in the funky black box of the Bushwick Starr in Brooklyn for 2014’s Ghost Quartet, a stunning chamber-pop song cycle; in the sleek environs of Lincoln Center Theater’s Claire Tow Theater for the less successful but still fascinating Rachmaninoff bio-musical Preludes in 2015. Remarkably, and most triumphantly, Great Comet director Rachel Chavkin and scenic designer Mimi Lien have somehow managed to turn Broadway’s Imperial Theatre into another Malloy sound playground, with seats rising from the stage in a near-mirror image of the house seating, and actors and musicians roving the entire space.

This doesn’t just immerse us in the action of the play; it also envelops us in the show’s non-stop music, putting us in the very midst of the people making it. To pull that off in a club or a small theatre is one thing, but to do it on a Broadway scale, in a theatre with 1,100 seats, required not just compositional but technological innovation. That’s where sound designer Nicholas Pope came in, with solutions not only to the usual challenge for any musical that employs amplification—minimizing feedback—but to the issue of localization, i.e., making sure that when all those far-flung voices and instruments arrive at our ears through the same mix, we can still tell where we’re supposed to look in the space.

The Imperial has 260 speakers installed throughout so that, as Malloy put it, “When Anatole walks from stage left to stage right, his voice travels from stage left to stage right, in time with him.” With a proprietary software Pope designed, called VODKA, sound operators can manage the show’s thousands of complex cross-points and zoning issues on an iPad, essentially “playing” the sound along with the musicians. Pope and his crew also spent time sampling the mixes from each seating zone. “More so than on many productions,” Pope said, “the concept here was to create a wonderful, pleasing show from every seat, but not the same show. Which is very different from the aesthetic that is normally taken on.”

It’s probably no coincidence that Malloy himself entered musical thea­tre through the sound-design door, creating soundscapes for experimental theatre productions in the Bay Area between jazz gigs. Soon he was roped into writing songs for shows, and eventually full-blown musicals. His first was Clown Bible, but his breakthrough was a commission from Berkeley’s Shotgun Players to write a musical with a company called Banana Bag & Bodice, run by husband and wife Jason Craig and Jessica Jelliffe. Their rollicking Beowulf: A Thousand Years of Baggage became a hit and brought them all to New York City in 2009.

That in turn earned Malloy a commission from the prominent Off-Broadway incubator Ars Nova, to whom he brought the idea of an immersive telling of a section of War and Peace. Among other inspirations, the show that became Great Comet had its roots in a trip to Moscow, where one night Malloy heard a folk trio at a club called Cafe Margarita and the next sampled a raging, multi-storied techno club. Hence Great Comet’s score, which super-collides folk and classical with techno, much as Malloy’s book and lyrics alternate slangy anachronism with verbatim Tolstoy, and the show’s aesthetic laces its czarist Russian setting with post-Soviet flourishes. More significantly, the show’s 360-degree staging—and the sound world that staging both requires and creates—has somehow stayed remarkably true to its sensory origins.

If Malloy’s score, with its tooting bass clarinet and electronic samples, doesn’t sound like anything else you’ll hear on Broadway, neither does his cast. In the title leads, Josh Groban and Denée Benton may have relatively traditional theatre voices, though both are shown to unique advantage in far-ranging songs that are closer to arias; as a pair of malevolent siblings, Anatole and Hélène, Lucas Steele and Amber Gray bring contrasting measures of oil and grit. But perhaps the cast’s biggest vocal outliers are Brittain Ashford, as Natasha’s concerned cousin Sonya, and Gelsey Bell, as the cooped-up Princess Mary. Ashford’s warm, buttery mezzo-soprano evokes Judy Collins or Sandy Denny, while Gelsey Bell’s limpid soprano stretches on a continuum between freak folk and experimental opera. These two singers may sound so well suited to their parts because Malloy wrote them with their voices in mind; he later conceived Ghost Quartet along with them and cellist Brent Arnold.

“Dave is so good at capturing these very specific emotional moments, listening not only to the world around him but to the people he’s working with,” said Ashford, who fronts her own folk/rock band, Prairie Empire. For her part, Bell—whose technical prowess, along with that of actor/singer Paul Pinto, inspired Great Comet’s mind-bending “grotesque and amazing” opera-within-an-opera—effused, “Part of what is so amazing about working with Dave is that I feel accepted into this musical theatre world with the voice that I have.”

Or Matias, who has music-directed Great Comet since its Kazino staging, as well as Preludes, pointed out the extent to which Malloy composes and orchestrates with all the players in mind, not only the singers. “That is part of Dave’s culture, wanting to utilize everybody’s abilities,” said Matias, who in addition to musical theatre has logged time in several bands, including Trans-Siberian Orchestra. Matias is also working on two gestating Malloy joints: a durational adaptation of Moby-Dick and a “Prince Hal” project based on Shakespeare’s Henry IV and V plays.

If there’s a downside to Malloy’s work, it is that the books and lyrics of his show—whether created by him, as with Great Comet and Preludes, or by frequent collaborator Jason Craig, on Beowulf and Beardo—don’t always reach the level of craft and inspiration his music does. That may explain why Ghost Quartet remains the essential Malloy creation; conceived as a kind of staged concept album, with a narrative more intuited than readily parsed, it is the fullest realization yet of his fused musical/theatrical vision.

On the other hand, Malloy has such a strong presence in his work, such an indelible artistic “voice,” that even when he and his actual gravelly voice are not literally on the stage, his best work exerts a distinctive magnetic force that atones for any dramaturgical sins. This is certainly true of Great Comet, which alternates moments of goofy literal-mindedness with the kind of transcendent, out-of-body passages that only the alchemy of music and theatre can achieve.

Sitting at the Imperial Theatre recently during a sound check, Malloy shared one overarching ambition for the show, which comes at an odd time, to say the least, in U.S. relations with an old rival.

“The dream for me is still to have a production in Russia,” Malloy said. “Obviously, Russian shit is really weird right now, so I don’t know how I feel about that politically, but culturally that would be an incredible experience.”

But the show might not even need to travel there to have an impact. Said Malloy, “I have, like, nightmares about Trump and Putin coming to see the show here. What would our response be? I’m so torn. There’s one part of me that would want to fucking bar them from the theatre—like, I would just stand out there and be like, ‘No, this is not for you.’ But then there’s another part of me that’s like, of course they should come, because the whole point of theatre is to make people empathize and have catharsis. I feel like there’s a version of the world where Putin and Trump come to the show and, like, have a revelatory moment and change.”

Well, he wouldn’t be a rock star if he didn’t have Bono-sized ambitions for world peace, would he? Whatever impact Great Comet does have, on theatre or musicals or the world at large, it will come via the intensity and singularity of its creator’s vision, realized with remarkable fidelity by simpatico collaborators. One of them, Ashford, was talking about how Great Comet managed to maintain its intimacy, even as it ballooned from Ars Nova’s overstuffed basement to the cavernous Imperial Thea­tre, but she might as well have been speaking of the range of all its composer’s oeuvre when she said, “It lends itself to this thing that can go from something very small to something very big. The music builds and creates these spaces—that’s why it feels the way it does.”