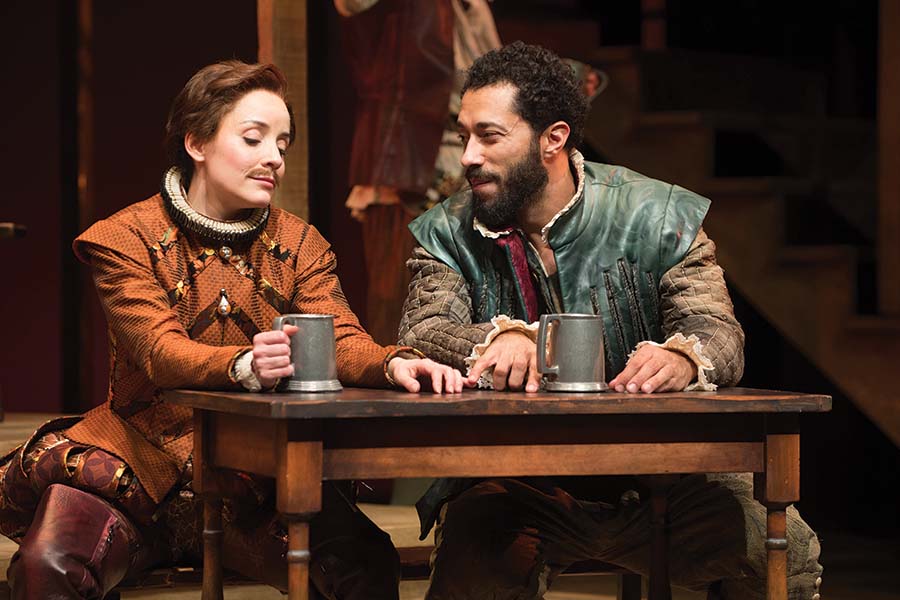 Jamie Ann Romero and William DeMeritt in "Shakespeare in Love" at the Oregon Shakespeare Festival. (Photo by Jenny Graham)

In the October 2017 print issue of American Theatre, we run 46 pages worth of listings in the magazine, of productions running in 2017-18 season at TCG member theatres (you can find an online version of those listings here). In addition to taking stock of the field’s schedule for the next 12 months, we also use these listings to compile our annual Top 10 Most-Produced Play and Top 20 Most-Produced Playwright lists, giving a snapshot of the hottest names and titles in the American theatre.

This year we received a total of 380 season submissions from TCG member theatres. From a total of 2,270 production entries they submitted, we excluded any readings and workshops, only counting full productions with at least a week’s worth of performances, for a final tally that numbered 1,917. For our Top 10 and 20 lists, following a long tradition, we discounted all productions of A Christmas Carol and plays by Shakespeare (which would top both lists every year, making them much less inclusive).

OF NOTE THIS YEAR

WHO NEEDS NEW YORK? Shakespeare in Love is this year’s No. 1 play, and it’s notable because it has been produced on the West End and at various U.S. resident theatres but not yet in New York City. Not since 2003 has a play taken the No. 1 spot without a New York production, and it was Michael Healey’s The Drawer Boy. “I am amazed and thrilled that my adaptation has topped this year’s list,” said Lee Hall, who in addition to adapting Shakespeare in Love adapted Billy Elliot for the stage. “The play is really a love letter to theatre. And it’s a testimony to its power that one can reach so far and touch so many. We need theatre now more than ever, so I salute all my American theatrical colleagues.”

TWO-TIMERS: In the 23 years of publishing our Top 10 list, Simon Stephens is only the fourth writer to have two plays on the list at the same time. Previous doubleheaders: Noël Coward in 1995, Martin McDonagh in ’99, and August Wilson in ’07.

WELCOME BACK: The only returning Top 10 play from last year’s list is Lorraine Hansberry’s A Raisin in the Sun.