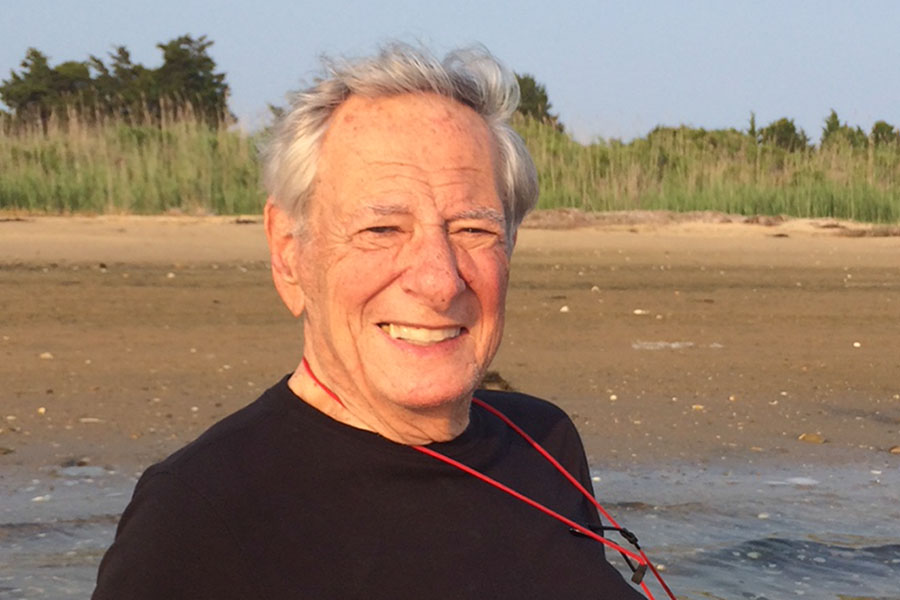 If you venture out onto Quitsa Pond these days on the island of Martha’s Vineyard—before it gets too chilly, that is—you might spot a man in a beige cap and a quilted vest, kayaking and digging for clams. In case you don’t recognize him, that’s Robert Sanford Brustein, de facto dean of the American theatre, and one of the true Renaissance men of the modern stage.

Bob Brustein may have turned 90 in April, but he’s as intensely focused on his current aquatic passions as he ever was on his illustrious career. During his seven decades of dedication to the American theatre, he has played many parts: educator, critic, theatre founder, producer, artistic director, director, playwright, adapter, even actor.

His contributions to the American theatre have been tremendous. He served as theatre critic for The New Republic for four decades and has written numerous books on theatre history and literary criticism, including The Theatre of Revolt, Making Scenes, Who Needs Theatre, Letters to a Young Actor, Rants and Raves, The Tainted Muse, Winter Passages, and numerous others.

His list of awards and honors—Fulbright and Guggenheim fellowships, the American Academy of Arts and Letters Award for Distinguished Service to the Arts in 1995, election into the Academy in 1999, induction into the American Theatre Hall of Fame in 2002, the George Jean Nathan Award for dramatic criticism–is capped by his 2011 National Medal of the Arts, awarded by President Obama.

Then there are his own writings not about but for it, including the plays Nobody Dies on Friday, The Face Lift, Spring Forward Fall Back, and Exposed, the musicals Schlemiel the First and The King of the Schnorrers, and of 12 adaptations of classics, from Aristophanes to Ibsen to Pirandello.

How did he achieve all this? Brustein’s life in the theatre has had four acts (so far): the decade of teaching and writing criticism in the 1950s and early ’60s; the Yale years, 1966-1979; the ART years, 1980-2002; and the years since, what I call his “Shakespeare years,” during which he has been consumed by a life-long love of the Bard and his work (including writing a trilogy of original plays on Shakespeare’s life).

What’s next? In addition to kayaking, clam-digging, and spending time with his family, his newest passion is poetry. Every day he is at his desk, writing poems as well as short political/satirical writings. He has just finished a book on Trump titled The Donald Diatribes and a collection of poems entitled Songs of Calm & Chaos. Word Plays, his new collection of short writings, will be published in a few months.

Between kayak outings this summer, Bob sat down with me to talk to him about his amazing career.

CAROL ROCAMORA: How did you get started as a critic?
ROBERT BRUSTEIN: I served in the Merchant Marines during World War II, but when the Korean War started, I was going to be drafted (they wouldn’t give me exemption for my prior service). So I decided to take an academic route. I got my M.A. and Ph.D at Columbia, and I taught at Cornell, Vassar, and Columbia. At the time, I’d been writing commentary for The New Republic. I wrote a piece about Marlon Brando as “America’s new culture hero”—how, with his portrayal of Stanley Kowalski, Brando had started a whole new school of acting. That article attracted the attention of Gilbert Harrison at The New Republic, who offered me the job of drama critic in 1959. I happily agreed.

You subsequently told the Harvard Crimson that you’d been offered a job as critic at The New York Times.
Yes, but I turned it down. At The New Republic, I felt I could speak the truth as I saw it without feeling responsible for people’s jobs. I would write once every two weeks, both reviews and commentary. I gave it up temporarily when I was at Yale, but then resumed while I went to Harvard, and wrote for them until roughly 2000.

Who, would you say, were your role models as a critic?
Eric Bentley, of course. The Playwright as Thinker is a groundbreaking book. In it, he asks that the playwright be taken seriously, not as a commodity or an entertainer but as an artist. And Lionel Trilling—he was a professor of mine at Columbia.

Looking back on your early years of reviewing, in the 1950s and early ’60s, what were some of the highlights?
The Living Theatre, in its early incarnation on 14th street, was doing fascinating work. Jack Gelber’s play The Connection was one of the highlights—it was an Off-Broadway milestone. All of of us—Jack Kroll of Newsweek, and Walter Kerr, too—recognized his talent.

The Off-Broadway movement was just getting underway.
I vividly recall the early Albee plays: The Zoo Story, The American Dream, Who’s Afraid of Virginia Woolf? (Actually, Three Tall Women, which he wrote decades later, impressed me the most.) Albee had a wonderfully wry, ironic wit and turn of mind, and the mentality of a practical joker. In later years we were on a panel together, and Albee leaned over and whispered if I’d ask him the following question: “Why aren’t your plays personal?” So I did. “All my plays are personal,” he replied.

I was a big supporter of Sam Shepard’s writing, too: Buried Child, True West. He was the leading experimental American writer. His imagination was freer than any of the others.

What about Pinter and Stoppard? They got started in the ’60s, when you were writing criticism.
At the time, I was more preoccupied with American theatre than English theatre. O’Neill is America’s leading playwright; his later plays (Long Day’s Journey Into Night, The Iceman Cometh, A Moon for the Misbegotten) are as good as Shakespeare’s. They touch deep existential themes, they go beyond reality into the realm of the spirit, they dig deep into the human soul. As for Williams, I saw the original production of A Streetcar Named Desire. Elia Kazan was the greatest American director, of film and stage.

You knew Lillian Hellman from the Vineyard, didn’t you?
Yes, we were very close friends. The Little Foxes is a powerful social commentary, and Toys in the Attic is a fine play too. She’s up there at the top with Miller and Williams. Our friendship was not professional, so we never talked about her plays. They just never came up. She was extremely hospitable. I recall once, on the Vineyard, William Styron gave her a ham—his fridge was too small—so she put it in her fridge, rounded up all her friends and served it to them.

What were some of your biggest challenges as a critic?
I remember when August Wilson gave a speech called “The Ground on Which I Stand” in June 1996, at the TCG conference, calling for a separate black theatre movement. I challenged him on this statement (in an essay entitled “Subsidized Separatism”). He, in turn, called me a “cultural imperialist.” I called him “the greatest playwright of the 18th century,” meaning that his attitudes were very old-fashioned.

I remember the interchange well—it sparked a huge controversy in the theatre community.
Subsequently we were invited to participate in a debate moderated by Anna Deavere Smith, whom we both knew. There were hundreds of people lined up outside Town Hall in New York, waiting to gain admission—the theatre community was there in full force. Lauren Bacall and Jason Robards were there.

The New York Times reported it was an evening of “passion, principle, and drama.” But Doreen, your wife, remembers it as a very stressful evening.
The tensions were high, and there was vocal audience reaction throughout, including booing. At the close of the evening, I called August “a teddy bear,” and he replied, “I may be personable, but I assure you I am a lion.”

What was the outcome, in your opinion?
In the end, people didn’t know quite what to make of it. But I don’t regret it for two seconds. I said what had to be said. Not long after, I met August at an American Academy of Arts and Letters event in New York. We embraced each other and sat down and had lunch together.

What did you learn about the theatre from reviewing? How did your perception of theatre change?
I learned that theatre could be empty and meaningless entertainment, or it could be a profound revelation of the human soul. I didn’t distinguish between hits and flops, but rather between commercial successes and works of art.

Those prolific years as a critic fed into your writing of a groundbreaking book of dramatic criticism, The Theatre of Revolt. What was its impact, do you think?
I had gained a reputation for being a cantankerous young critic, and it was having an effect on the theatre. I was giving Off-Broadway encouragement. Eventually, Kingman Brewster, then president of Yale, heard about my book, and wanted a revolution in the Drama School. So, without having read it, he appointed me dean of the Yale School of Drama, over the protest of the alumni (who wanted Walter Kerr, although the students really wanted me). He wanted a revolution, so I came to the drama school to revolutionize it.

What’s your view of criticism today in the American theatre?
Theatre criticism isn’t a thriving profession the way it was in the past. The theatre just isn’t as important. TV has taken over. It’s better than theatre now.

If that’s your view, then what’s the hope for the theatre?
The theatre has historically gone through different phases, sometimes strong, sometimes weak. As it strengthens, it will generate more criticism and critics.

It must be liberating to say whatever you want.
I’ve always done that. The secret of longevity? Become a drama critic. It’s the definition of catharsis. You’ll get rid of all your bile and live forever.   George Bernard Shaw lived until 94; John Simon is 92, Stanley Kaufman, till 97; Eric Bentley is 101. I’m the baby—I’m only 91.