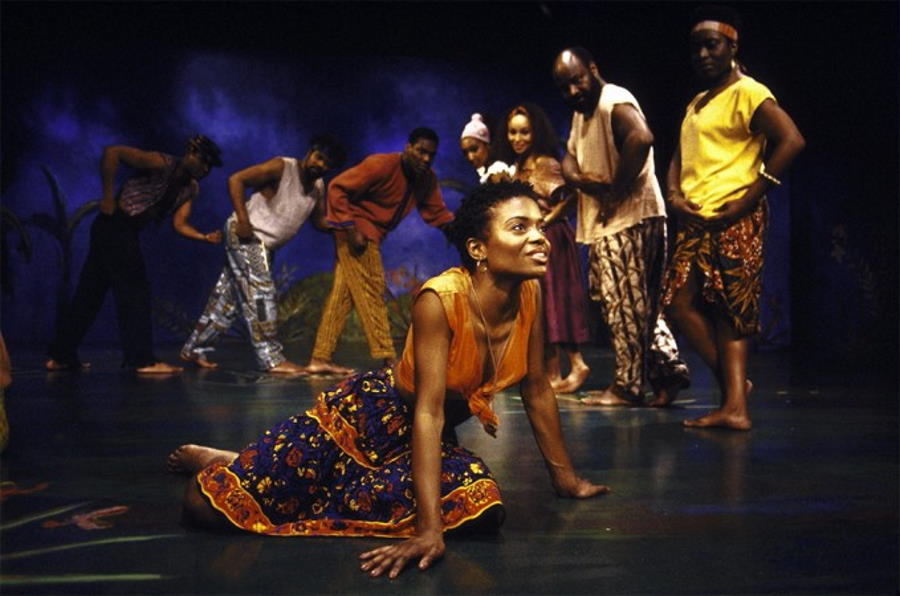 LaChanze in the original Broadway production of "Once on This Island." (Photo by Martha Swope/©NYPL for the Performing Arts)

I moved to New York City in the early ’90s to try my luck at becoming a Broadway singer. Soon I was singing for small local opera companies, in the chorus of the New York Gilbert & Sullivan company, performing on cruise ships and international tours. I loved performing, but what I enjoyed just as much was being in the audience. I loved going to see live theatre. I had several favorite Broadway performers I would see again and again if they were starring in a show.

The singer LaChanze was among them. I saw her in Company, Ragtime, and Spunk, but my favorite was her performance of Ti Moune in Once on This Island, a sensitive yet powerful Caribbean folk tale and winner of eight Tony Awards. I loved her voice and her honest, earnest portrayals. I considered her a quintessential performer of our time. I still do.

When I got married in 2000, I retired from the theatre world. As newlyweds, my husband and I moved to the Financial District, right around the corner from the World Trade Center. Everything about life seemed new and exciting, full of possibilities. But only a few months after moving into our new apartment, tragedy struck. On the morning of Sept. 11, 2001, the first plane crashed into the North Tower, shaking our building upon impact. We rushed out onto our terrace on the 24th floor. We watched helplessly as the smoke and fire erupted from the towers. To my horror, over my right hand shoulder—just 500 feet above me—the second plane flew over our terrace and crashed into the South Tower. The blast blew us back into our building and knocked us out on the living room floor. When we came to, we grabbed our dog and rushed down the stairs until we reached the exit door. Barefoot and still in pajamas, we escaped to Battery Park where the collapsing Twin Towers covered my husband and I with dust and debris and threatened to asphyxiate us. We evacuated Manhattan via a boat to New Jersey. It was January before we could return to our apartment.

Our dog clung to life, his insides cut up from ingesting glass from the debris he licked off his fur. We were in mourning for our city and the people who had died in the attacks. My husband had a close college buddy who had died in the North Tower in the offices of Cantor Fitzgerald. And, to my dismay, I read that LaChanze’s husband, Calvin Gooding, had also died there, leaving her with a young child while at the same time pregnant with their second.

Six months later, my husband and I still were picking up the pieces from the attacks. We walked around the rubble of the Twin Towers every day to our apartment, passing portraits of the missing. We struggled to find new jobs and found it difficult to even discuss the tragic events of that day with each other. We were locked in our own private hell.

I hoped a night out would give us some cheer we desperately needed. That’s when I saw an ad in the paper for an original Broadway cast reunion of Once on This Island. There were only two performances, given as a benefit for Broadway Cares/Equity Fights AIDS. The show would also be in honor of LaChanze, and in memory of her late husband. A portion of the proceeds went to the Cantor Fitzgerald Relief Fund, created to help surviving family members of the company who had lost more employees than any other that day.

I wanted to support the fund and support LaChanze, who, I imagined, must have been devastated. It was expensive, but I didn’t want to miss it. We spent money we didn’t really have on two good tickets.

It was May 12, 2002. The theatre was packed. With an audience still reeling from the attacks, the atmosphere in the theatre mirrored the emotions of the city: charged, angry, and tense. I was so excited to see LaChanze perform her signature role. But I’m sure everyone thought the same thing I did: How would she get through it? How would any of the actors get through it?

As soon as the curtain rose, the crowd went wild. There was a standing ovation after almost every song. When LaChanze finished singing “Waiting for Life to Begin,” the whole crowd stood and clapped for five full minutes. There were random exclamations of support and encouragement, and yells of approval from the audience you would never hear during a regular performance. When the cast members began to cry during “The Human Heart,” the whole theatre went crazy—people sobbed, clapped in support, yelled out, “You can do it!” and “We love you!” And the music rose to meet the emotions of the audience.

I had seen this show many times, but never had the lyrics held more meaning. When Ti Moune’s parents sang, “New dreams are everywhere, choose your dreams with care,” I heard them like it was the first time. Sitting in the third row, my heart—closed and shut off since the attack—cracked and melted, and I started sobbing too. For the first time since 9/11, I let my heart open up, and I finally let myself mourn in a way I hadn’t before. I cried so hard that the man sitting next to me shot me alarmed looks.

As for LaChanze, she gave the most heartfelt performance I’d ever seen her give. When the show ended, the clapping, whoops, and yells lasted a full 10 minutes. I jumped out of my seat to join in the standing ovation. As the cast took their bows, there wasn’t a dry eye in the house. As we left the theatre, I felt a rebirth, like I was ready for life to begin again.

In my 30 years of living in New York City, seeing over 500 shows and concerts, I have never in my life experienced anything remotely like that night at the Winter Garden Theatre. I still cry at the memory of it. The power of music opens your heart, and the theatre gives you a place to share that experience with others. It started me on the road to healing after that horrible, life-changing event, and I’ll never forget it.

Christina Ray Stanton is the author of Out of the Shadow of 9/11 and Faith in the Face of COVID.