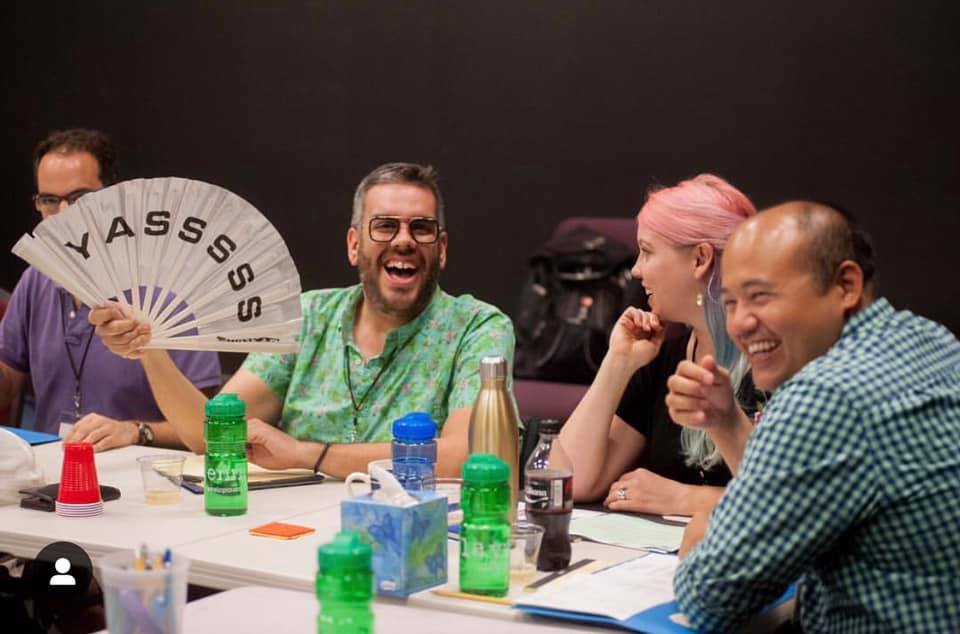 The first time I saw C. Julian Jiménez, in 2019, I remember thinking he didn’t look like anyone I’d ever met. I was smoking a cigarette with a friend on the corner of 52nd and 10th in New York City, and Julian—who at the time went by the name J. Julian Christopher—came down the street, walking side by side with Lou Moreno, the artistic director of INTAR Theatre, from which we were standing a few feet away. My friend knew Lou, so they struck up a conversation, and he introduced us to Julian. I observed him with curiosity: Taken separately, pieces of him (his gradient beard, his silver hair, his summer shorts) reminded me of other people, but put together, they made for a unique composition, someone who wasn’t quite committing to a single style or a specific norm.

When I sat down with him for this article, I learned that my perception lined up with Julian’s internal process. “I’ve always grappled with gender identity,” he told me. Julian did drag professionally in his 20s, then found that it extended to his personal life as well, as he started to wear women’s clothes and makeup. He doesn’t anymore; at 44, his identity hasn’t settled. “I’m still in flux,” he says. I confess to him that I’ve struggled with masculinity since I was a kid—I only grew a beard last year, which was quite a process for me, one that revised my image externally and internally. He smiles, nods, and then reflects on his own body: “A beard doesn’t make me a man. A penis doesn’t make me a man.”

I had heard of Julian before that chance encounter on 52nd Street; the Lark, which developed many of my plays, had just had a reading of Julian’s Julio Down by the Schoolyard (the play, like Julian, now goes by a different name, Julio Ain’t Going Down Like That). But I only really became familiar with his work this year, when Pipeline Theatre reached out to see if I’d be interested in consulting for their production of Julian’s Bruise & Thorn (Pipeline’s world premiere production runs Mar. 4-27).

Reading the script before accepting the offer, I recognized many of the contradictions and negotiations that go into defining one’s identity (or, in some cases, refusing to define it). Like his own image, Julian’s play collects familiar pieces to construct a unique whole. This tale of two queer Puerto Rican cousins working in a laundromat in Jamaica, Queens, has freestyle rap, voguing, and cock fights (sometimes simultaneously). Even the corner Pizza Hut is also a Taco Bell. I decided to take the job, in part because I could not imagine how Pipeline would be able to produce the play, and I was curious to find out.

It was the script’s “unproducibility,” in fact, that first brought Julian and Pipeline together. Back in 2017, a friend had mentioned Pipeline’s PlayLab program to him, saying the company believed in “making impossible plays happen.” She told him this only a few hours before the application was due—but, as it turned out, Pipeline only asked for a pitch and a few pages of the proposed project. At the time, Julian was living in Jamaica and had considered writing about “a live halal food shop intersecting with a laundromat as a cover for a cock-fighting ring,” but didn’t expect any companies to seriously invest in the idea.

“A lot of play development programs run by theatres believe in your voice but want to find a way to make it fit the needs of a production or the tastes of their subscribers,” he told me. With his friend’s encouragement, he sent in the idea to Pipeline and was accepted into the program, where he completed a first draft of the play in an environment where he said he not only felt no pressure to make the play producible, but genuinely encouraged to pursue his outsized vision. At the end of the program, Pipeline invited Julian to come back for a second year as a mentor to the new cohort, and in return offered him support to write a second play, Bundle of Sticks, whose subsequent run at INTAR was cut short by the COVID shutdown. (This season, INTAR, a long-time supporter of Julian’s writing, is mounting another work of his, ¡Oso Fabuloso & The Bear Backs!, at Joe’s Pub.)

Then, in 2019, Pipeline’s leaders Ari Schrier and Natalie Gershtein invited Julian to that favorite activity of all New York theatre workers: to grab a cup of coffee. In that meeting, they told him they wanted to produce Bruise & Thorn, as it was a play “perfectly aligned” with the company’s values as well as its “serious make-believe” motto. Julian was thrilled. He had had other productions before, he says, but he considers Bruise & Thorn a “transition point” from emulating other writers to finding his own voice. The play got him a lot of recognition, including a spot at New Dramatists and a development workshop at PlayPenn, but until Pipeline no one had committed to producing it.

“It’s scary for theatres to think outside the box” the way Pipeline does, he said. I asked him: For a play that so heavily focuses on a queer Puerto Rican narrative, was he nervous about it being produced by a company that is neither primarily queer nor Puerto Rican? “Well,” he reflected, “queer companies don’t often wanna produce my work, as I write flawed human characters that don’t always present a positive vision of my identity.” Lack of representation, he says, can leave underrepresented groups “starved” to see themselves onstage, but he is writing his personal experience (or, as he puts it, “for myself”), not something that can represent an entire culture. The best he can hope for is that the people who show up to see his work can empathize with his story. Regarding Pipeline, he told me he appreciates that the company is going for “authenticity rather than representation,” letting him take the lead and supporting his vision in the aspects of the production that are new to them.

I asked him if he felt any pressure in terms of authenticity, since the play is partly inspired by the students of Queensborough Community College, where he’s been teaching for over 10 years. “I grew up very privileged, in Long Island, living in a house where I never wanted for anything,” he admitted. Upon meeting his students, it dawned on him that his own explorations of “wearing embroidered jeans and flowing tops and eyeliner” had been safer for him than if he had done it on, say, Jamaica Avenue. “I am in awe of my Latine, Black, and Asian queer students who go by they/them pronouns and take a stand on their identity, wearing it like a badge of honor even when it’s dangerous—which, honestly, I don’t think I’ve had the courage to do yet.”

The fact that the play’s lead characters, Bruise and Thorn, are younger than him reflects a certain admiration for this youthful boldness, for students who have figured out their identities “much earlier than I did.” I asked him if the hunger that Bruise and Thorn feel to get out of Jamaica is one he sees in his students—but he said no. “It’s an American dream play, sure: ‘I can be better than where I started.’ But that’s also a red herring of sorts.” Without spoiling the play, Julian pointed me to the fact that the journey his characters go on is one that moves inward, rather than an escape. It reminds me of the oft-quoted phrase in Alcoholics Anonymous literature: “Acceptance is the answer to all my problems today.”

“What about you?” I pressed, probably because I have not yet completely accepted my own circumstances. Is he happy with where things are in his life? Is he hoping for more, for this play to take him to new career heights? He said no. “My career is as an educator—part of that is as a writer. I have no dreams about TV writing, being on Broadway. If all that shit happens, great, but it’s not the endgame. The endgame is creating theatrical texts that, when I was a fat, queer, gender-confused Latine non-Spanish-speaking kid, I could’ve found a role for myself in.”

Julian started his career as an actor and immediately faced rejection for not being “good looking enough, thin enough, Latino enough, butch enough.” He remembers being told, “You have a good look, but it’ll be great when you’re 40,” which means that if he had waited, his career would have only recently started. He was told to change his name, which he did, hiding his Spanish last name behind a period. He only reclaimed it last year: “The pandemic made me realize, why am I pretending I am someone I’m not?” He didn’t take the decision lightly: “It was risky, because people could be like, ‘Who the fuck is this?’ or they could say, ‘Well, now diversity is in, so he’s changing it back.’” Ultimately, he said, he had to ignore that internal noise. “I know none of that is true.”

As I listened to him, I couldn’t let go of that line about his students figuring themselves out much earlier than he did. I often look at the next generation with disdain for their brashness and lack of experience. But that disdain hides a certain envy, because they, unlike me, are not so afraid to push back when someone hurts them; I carry a lot of self-hate from unanswered taunts or assumptions that people felt entitled to make about me. Julian feels it a bit too. When I asked him what he has learned so far, he replied, “If I could give myself advice back to when I was young, I would have given the middle finger to all those people and I would have just been me.” But, 12 years ahead of me, he seems unbothered by it, as if the answer was in the journey. “It took me until I was 40 to do that. That’s why the 40s are the best! I am living my best life. I have found peace.”

Francisco Mendoza (he/him) is an Argentinian writer currently living in Brooklyn, after spending several years in Brazil. His writing spans theatre, prose, audio, and the screen, and he also works as a freelance journalist, teacher, and marketing consultant. notrealmendoza.com