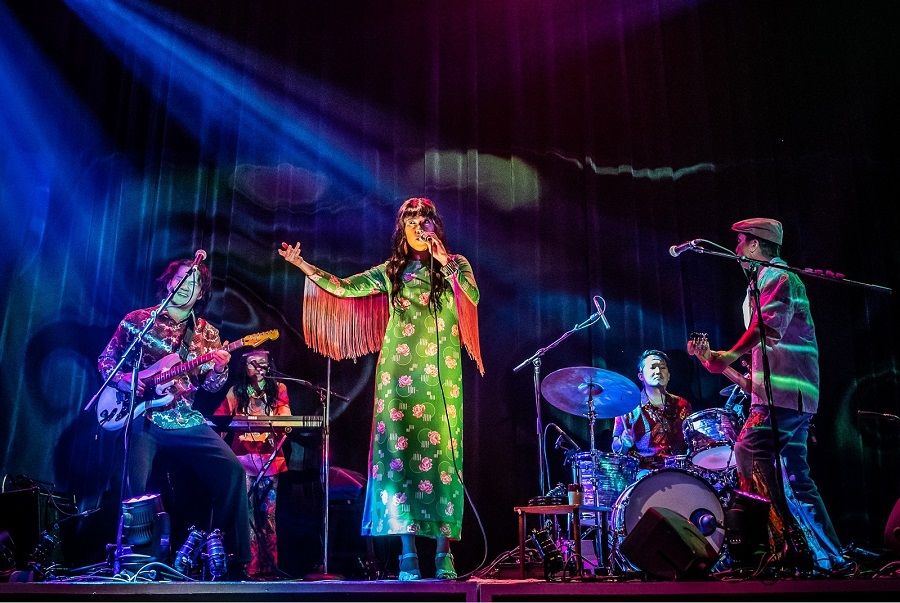 “What, exactly, is the ‘special sauce?'” I jokingly asked of four staff members at Theater Mu, Minnesota’s only Pan-Asian theatre organization, and one of the U.S.’s longest continuously running Asian American and Pacific Islander (AAPI) theatre companies, with a budget that’s a little over $540,000. Mu was identified as one of a number of “high performing” BIPOC performing arts organizations in “The Alchemy of High-Performing Arts Organizations, Part II: A Spotlight on Organizations of Color,” a report from SMU DataArts, in partnership with the Wallace Foundation, co-authored by SMU DataArts Director Zannie Voss, Ph.D., and SMU DataArts Research Director Glenn Voss, Ph.D., in partnership with the Wallace Foundation.

Mu has emerged two years into the pandemic not only thriving but doing better than ever. Mu’s resilience defies many odds: Many performing arts organizations have folded or curtailed activities due to COVID-19 closures; anti-AAPI sentiment and hate incidents are at the highest they have been for a long time; Mu is located in a metropolitan area that formed the epicenter of an intense racial reckoning; and the entire Mu staff coincidentally turned over within a year of the pandemic lockdown. Asked why the organization is nevertheless faring well, members cite different factors, from reconsidering labor practices to Mu’s small and therefore nimble size.

Two main ideas, however, set Mu apart from many organizations: wide-ranging training, knowledge, and skills that are not necessarily held by most nonprofit theatremakers and managers; and long-standing mutual support in a grounded community.

One clear strength that helped Mu pivot during COVID was the television production experience of then-new artistic director, Lily Tung Crystal. That, combined with the flexibility of the entire Mu staff, meant that within three days of the world shutting down, the theatre was releasing virtual content.

“For a long time, I didn’t want to tell people from the theatre world that I was journalist, because I thought they wouldn’t take me as seriously,” confessed Tung Crystal, who had completed a degree in English and worked in print and television journalism, which led to television writing and producing. Theatre was a constant wherever Tung Crystal went, first as a child actor in community theatre, and later as a union actor and director. When Tung Crystal was hired to become Mu’s artistic director in September 2019, she was excited to finally have the chance to devote her energy to theatre full-time. Six months later, the pandemic hit, and suddenly her television experience became a lifeline to keeping the theatre active and afloat.

Indeed, versatility might be one ingredient in the Mu special sauce. In his bestselling book Range: Why Generalists Triumph in a Specialized World, David Epstein, refuting claims about the value of early specialization, argues that engaging in multiple interests over time and developing “range,” as he calls it, leads to agility, innovation, and resilience. The staff at Mu would seem to embody Epstein’s notion of “range.” In addition to Tung Crystal’s television and journalism background, Anh Thu Pham, Mu’s managing director, worked in higher education administration for over two decades before joining the company. Programs manager Morgen Chang studied sociology and dance.

This range is part of what has enabled Mu to stay afloat and active through a tumultuous time when countless organizations of comparable size went under, laid off workers, or went on two-plus-year hiatuses. Mu did more than just “pivot”; the company reimagined what theatre meant, and did so for an eagerly awaiting community. “Mu has an amazing community,” said Pham.

That community has changed since Mu’s founding in 1992. Back then, “Asian America” was often associated with East Asian Americans, and the Asian American population of Minnesota was roughly equal parts Southeast, East, and South Asian. Now Southeast Asian Americans constitute the majority of people of Asian descent in Minnesota, with the Twin Cities serving as the largest concentration of Hmong Americans in a single metropolitan area in the United States. The visibility of Southeast Asian Americans, and particularly Hmong Americans has grown in the Twin Cities. Mu has worked to address these demographic shifts while also building upon the work of its founders. Compared to AAPI populations on the West Coast or in the Northeast, Mu serves a community hungry for representation. And it has apparently delivered, earning recognition from the McKnight Foundation as a Regional Cultural Treasure. Tung Crystal doesn’t take credit for this honor; it did not come because of “the last two and a half years,” she said. “It’s because of the 30 years that the community has supported Mu and kept it surviving and thriving through those decades.”

Surviving has become a more urgent mandate, as AAPIs have been under siege during the pandemic. The dramatic spike in anti-AAPI hate incidents across the country have led many AAPIs to even more extreme self-isolation, and many share heightened anxiety. In the ad-hoc affinity group I participated in during early summer 2021 after the Atlanta massacre, several AAPI theatre artists mentioned hesitation about going to auditions or taking roles offered to them, as they worried about leaving theatres late at night and being attacked.

In that context, Mu’s virtual programming provided a much-needed outlet. Mu-tini Hour, Mu Mondays, and Family Explorations were the original virtual mainstays. TwentyPho Hour Playfest, originally scheduled for May 2020, was postponed in solidarity with the uprisings around the murder of George Floyd. When it did show in September of 2020, it included many nationally acclaimed actors, playwrights, and directors.

Emerging in fits and starts from virtual to in-person, Mu continues to marry that “range” to community. Entering its second year, the theatre’s summer camp, in particular, is a powerful catalyst where multiple community interests converge: Theatre artists work during the day while addressing educational needs and working in solidarity earning stipends, and students learn about AAPI history and culture while also gaining skills as young theatre artists. And it all takes place in an environment where the critical mass of AAPI community can provide the cover and safety against the threat of violence that both adults and children have learned to dread.

This two-pronged approach to national and local incubation strives toward a balance that’s always necessary in community-based work. “We will never do a show where the majority of our artists are not local,” Tung Crystal vowed. At the same time, she added, “Because I think we are at the forefront of anti-racist theatre work, to make a bigger impact, we can only spread that news if outside people come in and then bring it back to their communities. It doesn’t help us to keep the secret here.”

She continued: “We stand on three pillars: on Asian American stories, on high-quality art, and on social activism.” Mu also recognizes that the art behind those stories isn’t just the province of actors and playwrights; Mu has begun to offer on-the-job training for design and management candidates as well. “We’re like a teaching hospital,” Tung Crystal said with a smile. In many areas over 30 years, Mu has been able to grow its own talent, from students in acting classes to assistant directors and assistant stage managers who go on to eventually lead direct and work as production stage managers for the company.

Not resting on its laurels, Mu has also undergone significant EDI training and reflection. As a BIPOC organization, you might think Mu wouldn’t feel the need to add this work to their plate. Instead, Mu has delved into intersectional approaches to programming and management, investigating modes of allyship with other marginalized communities as well as examining power structures and representational gaps within the AAPI community along lines of ethnicity, national origin, language, sexuality, or gender expression. This has led to Mu being particularly mindful in employing cultural consultants. While many theatre companies bring in cultural consultants for one day or week, or hire consultants whose advice they then proceed to ignore, the cultural consultant for Mu’s current production of Cambodian Rock Band was in the room every day for music rehearsals and once a week for scene rehearsals.

Looking toward the future, Mu is trying to balance the forward momentum they’ve generated with moments of pause and reflection. The idea both Tung Crystal and Pham contemplate is investment, both in artists as well as the community.

“The theatre industry as a whole has to look at how we’re balancing our budgets,” said Pham. “Often arts organizations have one star employee or volunteer, and if that person burns out? That’s not sustainable.” Tung Crystal mentioned that Mu has started five-day work weeks and eliminated 10 Out of 12s, which has led to an extra week of the rehearsal process. Using their wide-ranging experience to create the work while taking care of the community seems to be the map for the future. As Pham put it, “It’s one thing for Theater Mu to remain open. But if we don’t have a vibrant working artist community, it doesn’t matter if we are alive.”