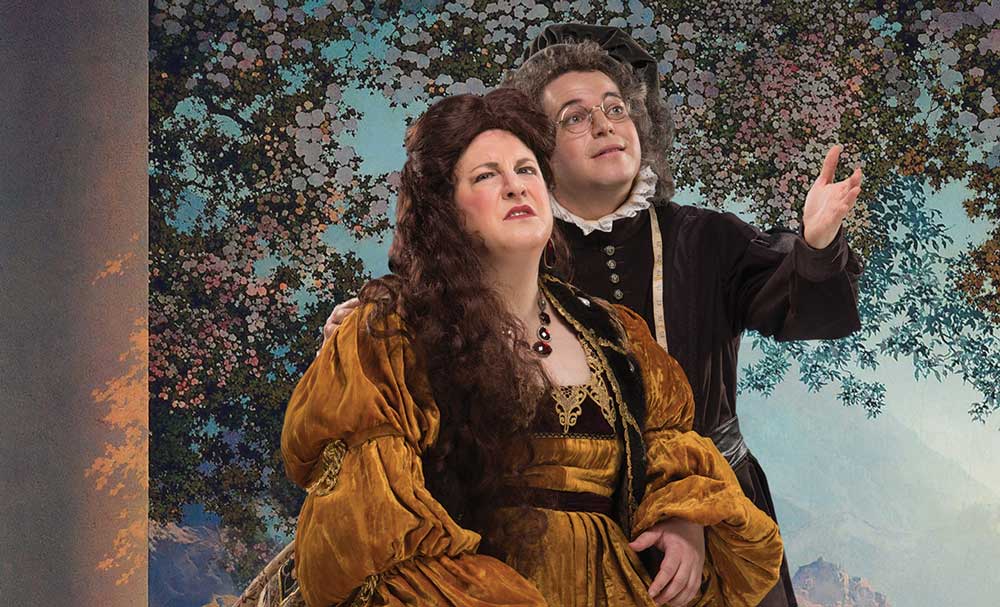 Sonia Garieaeff as Catiscià and Samuel Rabinowitz as Coco in "The Mikado" at Lamplighters Music Theatre. (Photo by David Allen)

SAN FRANCISCO: Since its premiere in 1885, Gilbert and Sullivan’s operetta The Mikado has been performed primarily in the following manner: a non-Asian (usually all white) cast dons kimonos, puts chopsticks in their hair, and wears heavy eyeliner to portray the denizens of the fictional Japanese town of Titipu. For lovers of G&S, the opera is a classic, both for W.S. Gilbert’s satire of 19th-century British society and as a memorable showcase of Arthur Sullivan’s tuneful music (indeed, even though I’ve never seen The Mikado, even I can hum “Three Little Maids”).

But for most Asian Americans and other critics, any aesthetic or satiric appeal the work might have is overshadowed by both its Orientalist text and its yellowface performance history.

“It’s not an accurate representation; it’s not a Japan that really existed,” Randy Reyes, artistic director of St. Paul, Minn.’s Mu Performing Arts told me last year, during the controversy around New York Gilbert & Sullivan Players’ (NYGASP) Mikado. “The names are very demeaning and racist,” referring to characters with such made-up monikers as Nanki-poo and Pish-Tush. “To even tackle that, what would you do? There’s a lot of Orientalism that was happening during that time. If the piece was stripped of all of that, would it still be a valid piece?”

One solution that Mu Performing Arts and director Rick Shiomi tried in 2013 was to mount a Mikado with a mostly Asian cast and set it in England; Reyes played Co-Co (changed from the original’s “Ko-Ko”) in that production.

For most companies who choose to mount Gilbert and Sullivan, recontextualizing the work is not common practice. But traditional productions of The Mikado have recently come under increasing scrutiny, including NYGASP’s and a 2014 production by Seattle Gilbert and Sullivan Society. While racial appropriation is still de rigueur in opera (see any local production of Madama Butterfly or Turandot), the practice has become all but non-negotiable in the theatre. Yet the works of Gilbert and Sullivan straddle both worlds.

So what’s a small theatre company to do if they want to honor Gilbert and Sullivan but not offend anyone in the process? That was the question Lamplighters Music Theatre, a 64-year-old company that primarily focuses on the works of G&S, asked themselves last year when they decided to mount The Mikado  this summer, Aug. 5–27. “Very early on in this process, we were aware of all the controversy around the United States with different productions,” said the production’s director, Ellen Brooks. “We wanted to do something new.”

Lamplighters originally planned on dealing with the show’s generalities and inaccuracies by increasing the specificity of the setting. Instead of a generic, fantasy Japanese village, Brooks would set her Mikado in the Meiji Era, the period where Japan began opening itself up to the West. Brooks said she has had a long fascination with the Shogun culture and wanted to pay tribute to that.

“I have a really high regard for that aesthetic and wanted to show them in this whole forward movement which completely upended their culture, and how they became really a strong military and economic power in the Pacific,” said Brooks, before adding with a laugh, “So we thought we were on the right track.”

Evidently not. As Asians comprise 23 percent of the population of the Bay Area (making them the second largest ethnic group), Lamplighters decided to reach out to local Asian-American theatre companies including Theatre of Yugen and Ferocious Lotus to recommend Asian-American performers for the show. But because The Mikado calls for a cast of 40, the theatre couldn’t commit to an all-Asian cast (previous Lamplighters’ productions of The Mikado contained actors of varying ethnicities).

“I told them that we don’t feel comfortable recommending actors unless we knew that they were casting the Asian roles with ethnically Asian actor/singers,” said Lily Tung Crystal, artistic director of Ferocious Lotus. And even though the non-Asian actors in this Mikado weren’t going to be wearing kimonos (since Western clothing was common in the Meiji Era) or yellowface makeup, Ferocious Lotus still refused to publicize Lamplighters’ casting announcement. “Our argument is that yellowface is yellowface if you have a non-Asian person in an Asian role,” said Crystal. “It didn’t matter what makeup or clothing they were wearing.”

That concept of yellowface, Brooks admitted, was “new to me as a director,” especially because in her work, “I’ve never used the heavy makeup and that operatic kind of exoticism.”

When, in March, Lamplighters decided to forgo the Meiji concept (and six months’ worth of work), they took a page from Jonathan Miller’s 1986 English National Opera production and reset the show in period England. In response, Ferocious Lotus released an open letter with the following questions: “Will any of your non-Asian actors be playing Asian roles and thus incorporating yellowface? Will any Asian actors be portraying stereotypical Asian characters? How will you handle the Orientalism that is present throughout the libretto and score?”

The letter has garnered 180 signatures so far, including from playwrights David Henry Hwang, Lauren Gunderson, and Christopher Chen. Under previous circumstances, this would be the part where a controversy would erupt, a production would be cancelled, and ill will would rise on both sides. Instead, on March 28, a few days after the letter was released, Brooks and two members from Lamplighters staff approached Crystal and members of Ferocious Lotus at the Theatre Bay Area’s annual conference for a 75-minute private conversation.

On March 29, Lamplighters released a statement of apology that read, in part, “Lamplighters Music Theatre acknowledges that our past productions of The Mikado have been performed in traditional style, and have given offense to people in the Asian community. For this we sincerely apologize…. We are now working on an entirely new production concept, removing all references to Japan and developing a new title and a new setting.”

Within a week, the new concept was solidified. The setting was no longer England (or Japan). It was now going to be in Milan during the Renaissance. The theatre was going to use the set from their 2013 production of Princess Ida. And Brooks and Barbara Heroux (the theatre’s artistic director emeritus) have combed through the script, changing character names, modifying any reference to Japan, and removing anything that could be construed as an ethnic slur. For example, the character of the Mikado is now Il Ducato, emperor of Milan, and the line, “We are gentlemen of Japan” has become, “We are gentlemen of Milan.”

Though the process “was like turning the Queen Mary around,” Brooks confessed, she also said she has noticed a new energy at the theatre. “I think what this has done, particularly for Lamplighters, is open up a door to a whole other way of looking at [Gilbert and Sullivan’s] work,” she remarked. “Then what happens is you find other creative wellsprings. These new ideas are popping up right and left and there’s a kind of wonderful new energy behind it.” To her, it’s about time more artists felt free to reintrepret Gilbert and Sullivan. After all, “People do it to Shakespeare all the time; they turn him right on his ear,” she said.

Taking a suggestion from Ferocious Lotus, Lamplighters has hired a local Asian-American activist, Malcolm Gin (who is not affiliated with either theatres) to serve as a consultant and look over the revised Mikado script to make sure that all Orientalist indicators are excised. And though the lead actors are white, the production has been cast with nearly 50 percent people of color.

With their new version of The Mikado, Lamplighters has joined the ranks of companies such as Mu Performing Arts, Chicago’s the Hypocrites, and the VORTEX in Austin in reintrepreting the controversial musical for a more diverse contemporary audience. The Hypocrites’ version, for instance, was set at a modern carnival and removed all references to Japan, while the VORTEX’s Mikado: Reclaimed took a metatheatrical approach in which an all-Asian cast performing the operetta while imprisoned in an internment camp. It shows that G&S is as resilient as Shakespeare or any classic opera; setting it in a new place only enhances the piece’s universality.

It’s also been an opportunity for communication—and it’s in keeping with the spirit of the show’s creation. Gilbert and Sullivan consulted Japanese sources, however incomplete, when they created the show. On May 9, San Francisco’s Yerba Buena Center for the Arts will host a panel on equitable representation in the arts, featuring representatives from Ferocious Lotus; Lamplighters’ artists will be in the audience. That same week, on May 2, a cohort of New York advocacy organizations will be producing a town hall on race and representation in the theatre, partly in response to last year’s controversy with New York Gilbert and Sullivan Players; the event will be held at Fordham University.

For Mina Morita, a director at Ferocious Lotus and the artistic director of Crowded Fire Theater, the ongoing conversations with Lamplighters have proved one thing: that the relationship between Asian-Americans and The Mikado need not be so complicated.

“Our hope is that ours is a model that we can point to, successfully, from both sides of the table and that it might further the conversation in a different way,” she said. “So it becomes less about drawing lines in the sand but still being vocal and clear about what is offensive, and how you engage the [Asian Pacific Islander] community in a way that’s respectful and making true space for the conversations to happen.”

If this new production is successful, more Asian-American actors will feel safe performing in The Mikado—just not necessarily playing the original’s faux-Asians. According to Brooks, some performers who didn’t audition initially have told her, “If we had known it was in Italy, we would have come out.”