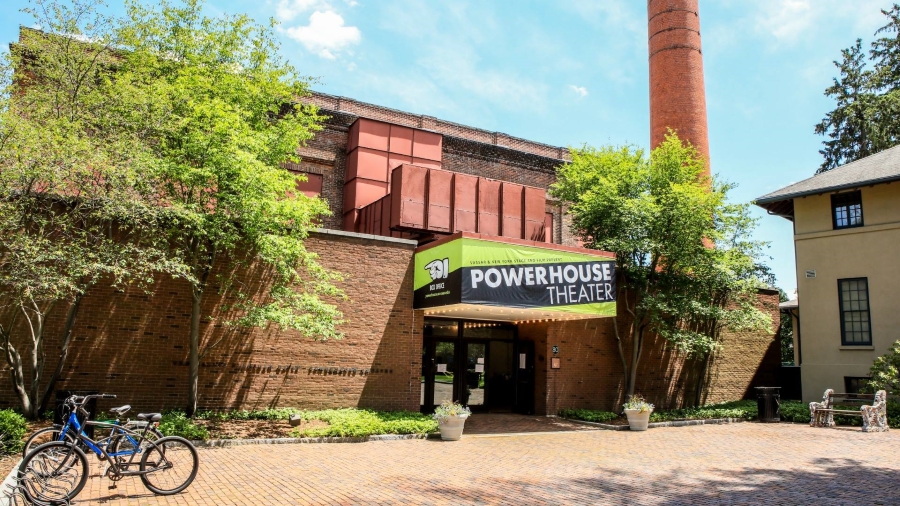 “Dip ahead!” yelled a company manager, maneuvering a golf cart through the campus of Vassar College. “Thank you!” wailed the riders in reply. We clenched the cart and braced for the slight decline in the road, a scene of Georgian Revival buildings and duck ponds whirring past. With limited time between readings and performances set on the sprawling, 1,000-acre campus, golf carts (and bikes and scooters) are an integral tool at Vassar & New York Stage and Film’s Powerhouse Theater summer season.

Time seems to both stretch and compact for the eight weeks Powerhouse descends upon Vassar College. I can attest: My 48-hour whirlwind trip to Poughkeepsie felt like a day trip, but also like it maybe could have been a week long? But in a good way! I saw a five-show sampling of the summer’s offerings, including four new plays and the Powerhouse apprentice program’s mounting of The Winter’s Tale. All of the plays explored the passage—and urgency—of, well, time.

Brooke Adams’s Delusion by Proxy is a satire set in the near future, in a United States controlled by a totalitarian government and ravaged by climate change. In The Paper Dreams of Harry Chin, by Jessica Huang, the titular character travels back in time—and is also visited by ghosts of the past as he tells the story of his journey to becoming an American citizen. The action of Beth Henley’s Lightning (Or the Unbuttoning) is activated by the urgency of purchasing a lightning rod before a storm strikes. In Ian August’s The Excavation of Mary Anning, a fossil hunter races against time to unearth the next big discovery of the ancient past.

“Part of what makes time expand here is that nobody goes home,” says artistic director Johanna Pfaelzer. She’s right: Playwrights work on revisions at picnic tables post-rehearsal, and working sessions extend well into the evening over drinks at the local bars. The pastoral setting aids to the distended pace.

This summer, Pfaelzer made sure to savor every moment. After more than 20 years with the company, she is leaving to lead Berkeley Repertory Theatre. Chris Burney, who most recently served as artistic producer of Second Stage Theater, has been tapped as Powerhouse’s next artistic director. He was on hand and fully embedded in the goings-on this summer, getting a peek behind the curtain and seeing just how a year’s worth of work fits into a two-month season.

“Time here stops—every day here is the equivalent of 10 days anywhere else in the world,” Burney marvels. “The amount of change and the amount of opportunity that can be created in just the span of a day here is amazing.”

Upwards of 20 projects, culled from more than 200 scripts, are developed each year and presented as readings and developmental workshops. Hundreds of artists take up residence in Vassar’s dormitories, while faculty members, Poughkeepsie residents, and industry insiders flock to the Hudson Valley to see the performances.

“I used to think of this as Brigadoon—this world that emerges from the mist every year,” says Pfaelzer. “But it doesn’t just emerge; we’ve willed it into being.”

The five-person Powerhouse staff swells to 55 in the summer months, and the well-organized company management team—plus those trusty golf carts—help to keep the Powerhouse ship in swift motion.

“There’s no way to come into a company like this cold,” says Burney, who first visited Powerhouse 15 years ago. “There’s so many things in place, and so many unusual things that make it actually tick. There is no handbook. When you work with creative minds you have to be flexible—and to try to codify that would be impossible and antithetical to the spirit of the place.”

Burney got into the spirit of things by joining the company management team on trips to the Poughkeepsie train station to pick up and drop off artists, organizing grocery runs, and even making beds for the incoming artists.

“Getting behind the scenes of the cruise ship that is Powerhouse has been exhilarating, and definitely a shift from anything I’ve experienced before,” he says. “It’s been a gift for me to be here and not to have to engage in the art except pinch-hit when Johanna can’t be in five places at once!”

Indeed, there are plenty of places to be at any given time: concurrent rehearsals, masterclasses, readings, and workshops. To keep up with the busy schedule, Burney rode a bicycle around campus.

In addition to all the work jam-packed into the short season, Powerhouse makes time for company members to have fun, too. The apprentices host karaoke nights. There are company-wide barbecues,  outdoor celebrations each weekend after performances, and Sunday morning bagel brunches. This year Burney’s mother hosted a party and organized a fleet of food trucks to come to campus as a way for the company and community to meet the Burney family. The event was dubbed “Meet Mum,” and everyone sported bracelets with the phrase.

“It’s totally bittersweet, but I think it’s really right for the organization,” shares Pfaelzer about her departure. “I have had a 20-plus years relationship with the company; it’s taught me everything I know about working in theatre. It feels like a great opportunity for somebody else to get to have this privilege.”

One of the great privileges of the gig, she says, has been working with artists. Pfaelzer’s goal has always been to make sure that each season includes a mix of emerging artists and returning artists “who really feel like family that we’re on a long journey with,” she says.

“It’s amazing to watch the cross-pollination between these different communities,” shares Burney. “That is what is sort of magical about the place—there might be someone who has worked on Broadway working with someone who is dreaming of Broadway. It’s a very powerful experience.”

Beth Henley is among the throng of Powerhouse veterans, having developed 11 plays with the organization. “They’re just my home,” she effuses. “I’ve been with them ever since the second year, and they always say yes. ‘What can we do to help you?’ ‘Where are you at in the process?’ ‘What do you need?’ They’re equipped to help you with what you need.”

Pfaelzer’s care and inquisitiveness, Henley says, has been at the forefront of the development process and her experiences at Powerhouse. “Johanna is simply a walking goddess,” declares Henley with a laugh. “Doesn’t she walk like a character out of a Greek Shakespeare play? I’ve seen her weather some tough situations without losing her cool.”

This summer has been an opportunity for Pfaelzer to share tips with Burney: for instance, about the precarious weather in the Hudson Valley, with its sudden summer rainstorms. “And this is the moment that I break it to you that there is not a lot of recovery time,” Pfaelzer tells Burney with a laugh. Indeed, the company presents readings and workshops year-round outside of the summer season.

“I’m going someplace else else that I’m super excited about, or else they would’ve had to pry me out of here at age 85—I would’ve been the oldest dorm resident ever!” says Pfaelzer. “It feels like a real moment for me to get to challenge myself and learn how to work in a really different structure.”

Even when plays and musicals go out into the world post-Powerhouse, they remain part of the organization. Pfaelzer will remain on too—as a board member—to help weather any future storms and ease the transition period.

“The word family is thrown around too loosely in the theatre sometimes, but this organization is a family,” concedes Burney. “It’s a community with a legacy—so you never really leave. Remember that, Johanna, when I call you!”