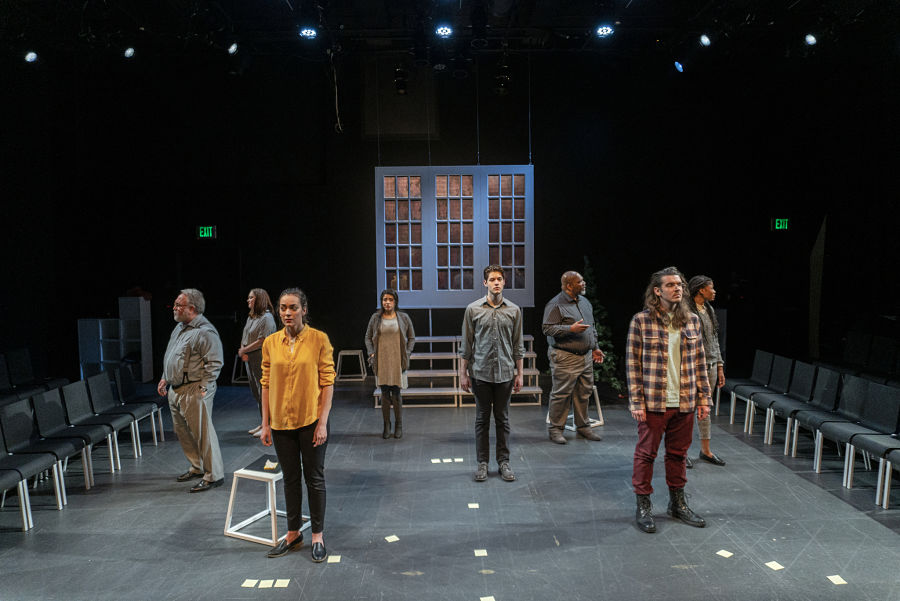 The cast of "Playwrights in the Newsroom" at the Wyly Theater.

“Are we skipping tomato tonight?” playwright Brigham Mosley shouts to director Aaron Landsman from across the rehearsal hall.

It’s the designer run-through of Playwrights in the Newsroom, a project Mosley and his co-playwright/producer/actor Janielle Kastner developed by shadowing and interviewing reporters from the Dallas Morning News, journalism students from Southern Methodist University, and community members. The resulting play opened at the Wyly Theater in Dallas this week as part of the Elevator Project at the AT&T Performing Arts Center, and it runs there through March 15.

Back to the tomato: Mosley is referring to a metaphor about personal truths, belief systems, and self-categorization the writers devised as an entry point to the conversation about the chaotic relationship between words, their definitions, their associated meanings, personal belief systems, and capital-T truths.

Before the house opens, they stop the audience in the lobby to ask: “Do you believe a tomato to be a fruit or a vegetable?” Believe is the operative word. This, as you might imagine, splits the room in two. For the writers, the resulting passionate divide over a “pulpy edible fruit that is eaten as a vegetable” (more or less Merriam Webster’s words) is a useful place to start a play about journalism in 2020.

Mosley and Kastner have been working on this play for two and half years, and this tomato metaphor was one of their earliest devices. (They even turned it into a Ted Talk.) For this rehearsal, they’ve decided to cut the tomato. Because one week before the show opened, it still didn’t have an ending.

In 2017, Kastner and Mosley were invited by Tom Huang, the Dallas Morning News’ assistant managing editor for journalism initiatives, to use the newsroom as a laboratory to write a play. (Full disclosure: Huang is a friend of mine, and the idea was dreamt up in a conversation we had; I identified Kastner and Mosley as the playwrights.)

At first, it was a low-stakes commission. Huang and the News would offer several hundred in cash and provide time over the course of a few weeks or months for the playwrights to do preliminary research and interviews. The writers were granted full creative license to create a work of art. Huang’s goal was for them to create a play or a performance of some kind that would allow the community to see inside the newsroom, and that this demystifying transparency could help rebuild trust in journalism.

The Dallas Morning News and the news industry at large has not had a good decade. Newsrooms still feel the aftermath of the digital revolution, with shrinking budgets and staffs. People want their news online, and they want it free and fast. The past few years in politics haven’t helped: If the zeitgeist were a word bubble, one of the larger fonts would read “fake news.” Huang saw a gap between what the public thought the Dallas Morning News was from the outside and what it felt like to be a reporter or an editor, trying to chase down stories—the important ones—and tell them with accuracy and fairness.

Mosley admits to being part of the demographic in that gap. Before the project, he consumed most of his news through social media. He would read fun, pithy articles on Buzzfeed or the New York Times or the New Yorker to keep up with the arts. Local news was only on his radar if he already cared about what they were writing about. He didn’t know if he should trust the Dallas Morning News. Weren’t they a conservative paper?

“My own journey has been a lot more skeptical than Janielle’s,” Mosley says. “I started pretty unsure, not just of the Dallas Morning News, but also the industry and the problematic legacies of any major institutions.”

But institutions, or at least the people inside them, would turn out to be key. The project quickly scaled up when Clyde Valentín, director of SMU’s arts and urbanism initiative, Ignite Arts Dallas, formerly of New York’s Hip-Hop Theater Festival, joined the production team.  He gave the writers the gift of time by offering a $5,000 grant and setting up a workshop with Melanie Joseph, artistic director of the Foundry Theater, in winter of 2018.

They left that workshop with a play about journalists doing their best to choose the right words and tell good, true stories. But they didn’t have what Kastner describes as “a big bad scary” for the final act. Then, one month after that workshop, the Dallas Morning News laid off more than 40 employees. The stakes were raised.

Kastner and Mosley are not conventional playwrights, and they had never written anything together. Mosley is a queer solo performance artist, in the vein of Taylor Mac. He writes his own work and typically he performs it, almost always in drag. Kastner writes more traditionally structured plays, but with plenty of abstraction.

All of this to say, they were never going to write an updated version of All the President’s Men. Think Laramie Project, toss in some Brecht, add a dance number, muddle it in a volatile industry, and voila! Playwrights in the Newsroom.

“If I had to track the play in impressions, I’d say first it was a bunch of ideas about journalism, then it turned into fun theoretical futuristic scenes, transformed into our theories about news, then it turned into super-text-based, and most recently we turned our hypertextual draft into poetry,” Kastner says.

For this project, the two have blended techniques of devised theatre, docutheatre, and verbatim theatre without using any of those genres fully. The journalists who spoke to the writers may see themselves in the play, hear stories they’ve lived, ideas they’ve shared, without being named or fully fleshed out.

“For us, what we called fiction privilege became fiction responsibility,” Mosley says.

To pull this off, they’ve relied on theatrical devices. The play is self-referential, with the audience following Mosley and Kastner on the journey of writing the play itself, shadowing reporters to city council meetings, hearing community criticism firsthand, struggling to stay invested. The actors who play the journalists come together as a headline-reading chorus, which falls out of step and fractures throughout the play.

“The chorus becomes a reckoning with the idea of institutions,” Kastner says. “There are moments when someone has to shirk their individual identity to be part of this one voice working in unison. It underscores the incredibly agnostic mood of the play.”

As they searched for an ending, Kastner and Mosley didn’t feel compelled to find answers. Throughout the play, they ask the journalists they meet what happens if journalism fails. The journalists’ resounding answer: “Democracy dies and corruption flourishes.”

For Mosley and Kastner, the play doesn’t lean into anything that heavy-handed. Instead they come back to the concept of trust.

“For me, the journey of this play, this process, and to that end journalism is an extension of the human impulse to trust,” Mosley says. “I want to be in a community where I can trust people and believe people, and I want to be trustworthy and worth believing.”

This week the play has an ending. If Playwrights in the Newsroom lives beyond this two-week run, there’s no reason to believe the words won’t change, or how those words are used won’t evolve, or the definitions of those words won’t mean different things to different people. Or that next week someone won’t put a tomato in a fruit salad.