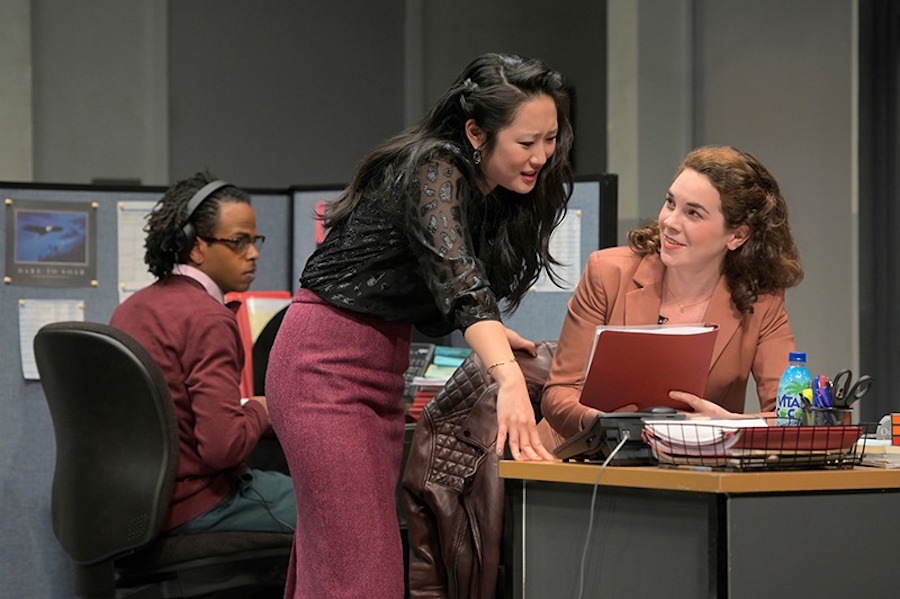 Almost every audience has that one person whose laughter is a little bit louder and a little bit longer than the rest. Sometimes that sound is a wrinkle in the experience of a live show—but I was happy to welcome that guffaw into my living room for my recent solo viewing party of Gloria, a Vimeo stream of a performance from San Francisco’s American Conservatory Theater, which was taped in front of a live audience in mid-March.

Laughter aside, there are many ghosts of plans on my now empty spring calendar—dozens of live theatre performances, all cancelled because of COVID-19. This home viewing of Branden Jacobs-Jenkins’s Gloria was my first dip into the digital theatre experience since the pandemic hit, and there’s a growing pool of offerings for theatregoers to virtually attend this season’s cancelled shows.

I found a few comforting prospects in this new reality. For one, I got to “visit” a theatre located 3,000 miles from my Brooklyn apartment. Secondly, there was no line for the bathroom or the concession stand at intermission. Lastly, and this is obviously the best part, I wore pajamas.

And while this certainly will be a limited phenomenon for the time being—no new plays are being staged, and hence none being recorded—here are some of the theatre companies around the country currently offering tickets to video streams of performances that were cut short in mid-March. Now, for the moment at least, you too can tour the American theatre from the comfort of your couch.

Actors Theatre of Louisville
Were you planning to attend the 2020 Humana Festival of New Plays? Pour some bourbon and view the two shows back-to-back for an authentic Humana experience. Pay-per-view tickets, on a sliding scale of $15-100, are available for Jeff Augustin’s Where the Mountain Meets the Sea, about a Haitian immigrant’s road trip out West, and his son’s same cross-country journey decades later. The play, directed by Joshua Kahan Brody, features folk music by the Bengsons, and is all about connecting with loved ones—even after they’re gone.

Many of you are probably pros at Zoom by now, and can organize a group FaceTime call with your eyes closed. The Actors Theatre’s 2019-20 Professional Training Program perform Are You There?, a collection of short plays that explore the high-tech evolution of our social interactions, from online chat rooms to telephone party lines. Robert Barry Fleming directs this prescient show, featuring plays by Vivian Barnes, Jonathan Norton, and Gab Reisman.

American Conservatory Theater
I highly recommend Gloria, streaming through April 5, about a group of editorial assistants at a New York magazine who will go to great lengths to climb the ladder of success. Directed by Eric Ting, it’s the kind of story that makes you glad to WFH.

Lydia R. Diamond’s Toni Stone, also streaming through April 5, is an uplifting story about the life and career of the first woman to play professional baseball on a big league team. It will inspire you to take that much needed seventh-inning stretch. Tickets for both shows are available on a sliding scale of $15-100.

16th Street Theater
The Berwyn, Ill. theatre will stream Methtacular!, written and performer by Steven Strafford. The autobiographical musical is a comedic account of the author’s three years as a crystal meth addict in Chicago. Tickets are available for $12 through April 4.  Adam Fitzgerald will direct.

Rattlestick Playwrights Theater
I don’t know about you, but I’ve been seeing a lot more of my far-flung siblings these days—virtually, that is. The Siblings Play at New York City’s Rattlestick Playwrights Theater, by Ren Dara Santiago, is about the impenetrable bond of three siblings left to care for each other in their parents’ absence. Tickets for the play, directed by Jenna Worsham, are available for $15 through April 5.

American Shakespeare Center
If you’d like to brush up on your Shakespeare during quarantine, American Shakespeare Center in Staunton, Va., has the goods. The repertory company’s streaming platform, called BlkFrs TV! brings its complete 2020 Actors’ Renaissance and Tour Homecoming shows to the screen this week. Pay-what-you-can tickets to Shakespeare’s Much Ado; Henry IV, Part 1; Henry IV, Part 2; and A King and No King, a comedy by Francis Beaumont and John Fletcher, are available here. Ticket purchases will benefit ASC’s Employee Relief Fund to support staff and artists currently on furlough.

Dallas Theater Center
American Mariachi by José Cruz González sounds like the kind of heartwarming content we deserve right now. When Lucha discovers that a mariachi album sparks her ailing mother’s memory, she decides to buck 1970s tradition and form an all-female mariachi band with her cousins. Tickets for the music-filled comedy, directed by Henry Godinez, are available on a sliding scale of $15-100 through April 5.

Cincinnati Playhouse in the Park
Destiny of Desire by Karen Zacarías is a comedy about twins switched at birth who  reunite at the age of 18 after experiencing two very different upbringings. The play, which pays homage to Latin American soap operas, is available to rent for $35 through April 11. José Luis Valenzuela directs.

Marin Theatre Company
In Kate Cortesi’s Love, a woman takes a look into her past when her former lover and boss—and current friend—is accused of sexual misconduct. Directed by Mike Donahue, the play will be available to stream for $35 through April 12.

Alley Theatre
Some people find solace in dystopian worlds during times of trouble. If that’s you, you might enjoy Michael Gene Sullivan’s stage adaptation of George Orwell’s classic novel 1984. Tickets are available for this production, directed by Rob Melrose, for $20. The viewing closes on April 12.

The Repertory Theatre of St. Louis
There’s nothing better than baking (and eating) a cake while cooped up at home. Or maybe there is—you can eat cake while streaming Bekah Brunstetter‘s The Cake, a play about a baker wrestling with the decision whether to make a cake for a same-sex wedding. Tickets for the show are available for $35 through April 12.

Geva Theatre Center
Parents currently in the throes of homeschooling might commiserate with Molly Smith Metzler’s Cry It Out, about the struggles of being home with a baby and the effect class has on parenthood in the U.S. This production, presented by Kitchen Theatre Company, is directed by M. Bevin O’Gara.

Those whose dating apps are on pause right now might find romantic hope in the musical Once, with book by Enda Walsh and music and lyrics by Glen Hansard and Markéta Irglová. Based on the film by John Carney, the story follows an Irish street musician who falls for an immigrant who inspires him to pursue his dreams.  Mark Cuddy directs. The rental fee for each Geva show is $35, and the streams are available now through April 14. As a bonus, ticket buyers will also receive 50 percent off an annual subscription to the streaming service BroadwayHD.

Milwaukee Repertory Theater
Danai Gurira’s Eclipsed is about a group of resilient women who form an unlikely sisterhood during the Liberian Civil War. The play, directed by May Adrales, follows the women as they imagine a world beyond the war, after the fog of the ongoing battle lifts. Patrons can purchase tickets for $15, and the streaming is available through April 12.

Kansas City Repertory Theatre
The OriginKC News Festival was cancelled, but two of its offerings are now available to stream online. Frankenstein: A Ghost Story by Kyle Hatley, unravels Mary Shelley’s science fiction tale and hones in on the novels theme that we’re not alone in our misery. Joanie Schutlz directs. And Stacey Rose’s Legacy Land, directed by Logan Vaughn, is a dark comedy about a legacy of sexual abuse that imprints upon the lives of two sisters. Both plays are available to rent for $20 each, from April 1-15.

Williamstown Theatre
Pay-per-view tickets are now available for Eric Coble’s These Mortal Hosts  through April 26 on a sliding scale of $20-35. The play follows two strangers who come together to try to decipher the strange Mysteries overtaking their small Colorado town after a tragedy strikes. Paige Conway directs.

TheatreWorks Silicon Valley
Streaming of Pride and Prejudice at TheatreWorks Silicon Valley in Redwood Shores, Calif., will kick off with a virtual opening night party on April 10, featuring Beth Leavel and Julie James as hosts. The musical, with book, music, and lyrics by  Paul Gordon, is adapted from Jane Austen‘s iconic novel about the unlikely romance between Elizabeth Bennet and the dahsing Mr. Darcy. The show, directed by Robert Kelley, had its world premiere run Dec. 4-Jan. 4, 2020. Viewers can rent the musical through Streaming Musicals for $4.99, or purchase for $19.99.