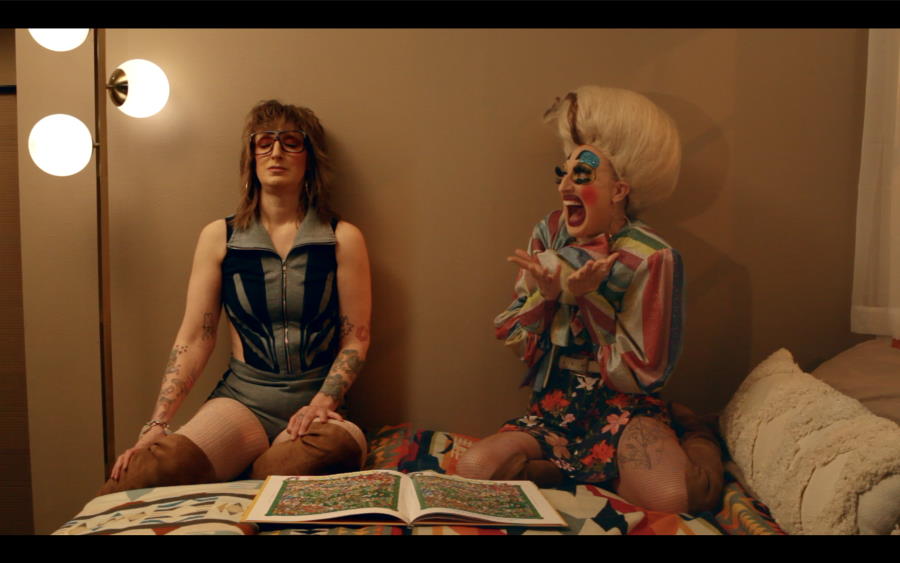 Jody Kuehner and her alter ago Cherdonna Shinatra in "The Ball Pit."

With her electric-lime-green, lace-bell-bottomed unitard, couture-cotton-ball hair, and makeup that lands somewhere between drag queen and clown, the indefinable character served as an emcee of sorts for an adaptation of the Ibsen classic, produced in 2017 by Seattle’s Washington Ensemble Theatre and aptly named Cherdonna’s Doll’s House.

“Welcome to my plaaaaaay!” she crowed, vibrating with excitement. What began as a traditional Doll’s House slowly unraveled, as Cherdonna began interjecting to explain things to the audience, inserting herself into scenes and changing the show as she saw fit, making actors swap lines or change places, speed up their dialogue, or perform multiple scenes simultaneously.

“She has a way of being that’s incredibly funny, then horrifically sad and tragic at the drop of a hat,” said WET artistic director Maggie L. Rogers (she/her), who assistant-directed Cherdonna’s Doll’s House and is directing Cherdonna’s new dance-theatre-film The Doll Pit, another WET collaboration, which premieres May 21. “Her childlike view of the world is incredibly relatable.”

Cherdonna is the stage persona of Jody Kuehner (she/her), a multifaceted Seattle-based performer and creator, and a queer cisgender woman who performs in the aesthetic of drag. Weaving Cherdonna’s boundless exuberance and guileless curiosity into A Doll’s House allowed Kuehner to expand the emotional reach of Ibsen’s 1879 proto-feminist exploration into exciting, vulnerable and unpredictable new territory—which in turn allowed audience members to question the work, and their response to it, more deeply than usual. It was another puzzle piece in a career-long exploration of gender, femininity, and patriarchy, to name just a few of Kuehner’s existential fascinations.

In many ways, Cherdonna is a study in opposites: rigorous and out of control, gentle and aggressive, warm and unnerving, honest to a fault yet artificial as a Chromatica Oreo. One constant in experiencing her work is the frisson of sharing space with someone truly impulsive—you never know how she’s going to make direct contact, but she will. The Doll Pit puts Kuehner into direct contact with the only other performer she’s been able to work with consistently throughout the last year: herself.

“With the pandemic, everybody is contained in their space, dealing with themselves,” Kuehner told me in an interview. “People are all experiencing frustration and loneliness and uncertainty. Even if you live with people or you’re married, or you have kids, there’s still a certain amount of loneliness that happens, and isolation both figuratively and literally. And I happen to have a character that lets me explore that.”

After being in shock for six months, she started looking for ways to re-enter performance without relying on Zoom, a space that doesn’t really interest her.

“I kept saying to Maggie, when we were talking about performance and pandemic life, ‘I just don’t want Cherdonna in my bedroom,’” said Kuehner. “And she said, ‘That’s it, that’s the show. Here we go.”

The Doll Pit stars both Jody and Cherdonna, side by side, in an exploration of loneliness and identity crisis and a meditation on how an isolating pandemic affects an artist. Plus a ball pit.

“In rehearsal [for Cherdonna’s Doll’s House], sometimes I would have to leave the room because I was laughing so loud,” Rogers said. “It’s a recurring thing in our working together, and was actually kind of a problem during filming [this piece], because I had to be silent.”

Cherdonna may not be strictly a theatre artist, but then Cherdonna isn’t strictly anything. By training, Kuehner is a contemporary dancer and choreographer with an impressive résumé: a BFA in dance from the University of South Florida, long tenures performing with choreographers such as Pat Graney and Mark Haim.

In 2009, Kuehner debuted Cherdonna alongside Lou Henry Hoover, the drag king persona of fellow Seattle dancer Ricki Mason. The Cherdonna and Lou Show, as that five-year collaboration was called, allowed both performers to stretch their artistic legs, so to speak, away from the strictures of the dance world.

“We had a big rule in our work for Cherdonna and Lou that was basically: Show all the emotions that you’re feeling all the time, and don’t do anything until you’re ready,” she said.

When asking “What am I feeling right now?” Kuehner and Mason honored both their immediate circumstances and the larger context of their lives. That responsiveness imbued Cherdonna with her childlike volatility, a Gumby-like physicality driven by a brain seemingly always on the verge of emotional overload.

Like all of us, Cherdonna has evolved over the last decade, as have the ideas Kuehner wants to explore through her. In 2014, Cherdonna’s first full-length solo show, Worth My Salt, waded deep into existential crisis with the help of three relentlessly chanting, toga-wearing chorus boys. Clock That Mug or Dusted in 2016 was a “a conceptual and inspirational homage to feminist performance artists,” in which Cherdonna made art out of paint and birthday cake using her own body.

Kissing Like Babies, a 2017 production at On the Boards, featured a brass band, “a chorus of adult toddlers,” and Cherdonna in an absolutely enormous baby bonnet for an investigation of the infantilization of women.

Having fans means navigating expectations, and not all her work is for all audiences. Those who’ve howled with laughter at Homo for the Holidays might not know what to make of the abstraction of Clock That Mug or Dusted. That show in particular, Kuehner remembered, had a lot of audience members leaving, and comments in the vein of, “What the hell is this? This isn’t comedy, this isn’t Cherdonna being fun and wacky!” Hard as that response was, she’s still proud of that show; it’s also the one she’s toured the most, to more than 30 cities around the country.

In Keuhner’s experience, expectations can come as much from the performance space itself as they do from the artist or the audience.

“The most diverse audiences I’ve ever had are in museums,” Kuehner said. “I love a contemporary dance theatre space, but people come in thinking, ‘All right, is this dance? Is this theatre? What am I looking at?’ At a museum or a gallery, people are just like, ‘Oh, I’m gonna go see this weird art thing’ and don’t seem to care about what the form is.” DITCH, a performance piece and immersive, candy-colored installation that Kuehner debuted at Seattle’s Frye Art Museum in 2019, was seen by more than 3,500 people during its initial three-month engagement.

Sixteen months ago, Kuehner and I sat in a restaurant in Seattle’s Capitol Hill neighborhood, chatting about a different show she was making with Washington Ensemble Theatre, very loosely based on the story of Dr. Jekyll and Mr. Hyde. Listening back now, our conversation seems painfully distant—ceramic clinking, espresso machine hissing, the low contained hum of a dozen private conversations.

And oh, the plans: In addition to Dr. Cher and Mr. Donna, Kuehner was gearing up to bring DITCH to Crystal Bridges Museum of American Art in Bentonville, Arkansas, and dreaming on a planned collaboration with Philadelphia artists John Jarboe (of cabaret collective the Bearded Ladies) and Martha Graham Cracker (the drag persona of Pig Iron Theatre Company’s Dito van Reigersberg).

“The original concept was taking iconic Hollywood trios and reimagining them,” said Kuehner, whose own name stage name invokes a trio of performing icons. “From the Three Stooges to all those Marilyn Monroe movies with her and two men—all those gender dynamics, and dynamics that play out in a trio is interesting to me. Also they’re great performers, and all three of us are doing sort of a different version of drag. So how did those overlap?”

That project was delayed by COVID, which led to another delay, thanks to stagnant funding—a frustration Kuehner knows all too well, even for someone with as much success as she’s had as an independent artist. Even in the best of times, the grind of grant proposals and wooing presenters takes energy that would otherwise go into making art. That trio show is still very much in the works, but Kuehner is investigating alternative producing models.

The Doll Pit is another foray into uncharted territory, in collaboration with Rogers as director and Stephen Anunson as cinematographer and editor. Kuehner has worked minimally on film, and it’s been a while since she last performed as herself rather than as Cherdonna. “Parts of it are comical at this point, but this show is a little darker, it’s a little sadder, it’s a little lonelier,” Kuehner said. “It’s just representative of the time and how I’m feeling.”

Said Rogers, “We had a lot of conversations about being a creative person during quarantine. When I’m at home alone with my creative self and they want me to create but I don’t know if I can, how do I balance who I am without actively making art? How does real-life Jody have Cherdonna inhabit her brain and her space? Because there’s not one without the other.”

Indeed The Doll Pit takes Kuehner’s fascination with the existential to the next level, fueled by all the questions and anxieties surfaced by a year living through a pandemic.

To keep Cherdonna out of Kuehner’s real-life home, the WET team built a replica of her bedroom in their performance space at 12th Avenue Arts, then filmed everything, as Kuehner put it, Parent Trap-style.

For someone who improvises as much as she does, the requisite planning and resulting permanence of film was a difficult shift for Kuehner, as was the “hurry up and wait” schedule of a film set. Keeping Cherdonna-level energy up for half an hour while lights are being adjusted can be hard.

In many ways, COVID has thrown the “but is it theatre?” conversation directly in the trash where it belongs—which, in a weird bit of pandemic symbiosis, aligns nicely with Kuehner’s impulse toward hard-to-explain work.

There’s an element of “why not?” in all things Cherdonna, an honest interrogation of rules and assumptions that’s a powerful form of subversion. Why do we, as a culture, want to treat women like babies? Why do we care so much what a man had to say about the role of women in 1879? If we were really allowed to express ourselves in every moment, what would we say?

“You’ve just gotta keep doing what you’re interested in,” Kuehner said. “I believe that every artist has their audience, they just have to find each other. I really do. Artists should be able to experiment, and I want to keep experimenting, but if we find the people that we like, and like us, it works out.”