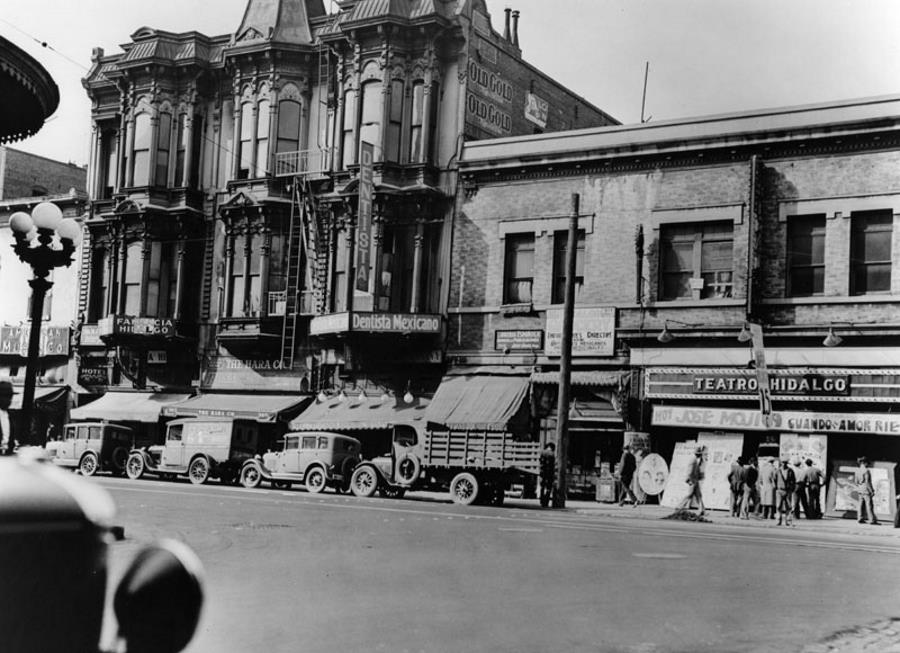 Teatro Hidalgo in Los Angeles, circa 1920.

National Hispanic Heritage Month runs Sept. 15-Oct. 15. For more AT coverage of Latinx theatre, past and present, don’t miss our special issue from 2016.

Teatro Hidalgo, the “longest-lived Mexican venue in Los Angeles devoted to the presentation of live theatre,” opened on Sept. 11, 1911, with a production of El Puñao de Rosas (A Bunch of Roses). The production was a zarzuela, a Spanish-language musical comedy. For 25 years, Teatro Hidalgo, with a seating capacity of 700, was home to stage plays, film exhibitions, vaudeville, and revistas políticas (political reviews). It was one of the most important Spanish-language theatres in the U.S. Though control of the theatre building changed hands several times, the programming consistently played to Mexican and Mexican American audiences and “stressed its Mexicanidad.” During the 1930s (before it closed in 1936), Teatro Hidalgo reached an even wider Latino audience through radio broadcasts of its theatrical and vaudeville acts.

In 1961, Cuban American playwright María Irene Fornés wrote her first play and had it produced in New York and published that same year. The play, written in Spanish, was La Vivuda (The Window), and was based on letters that Fornés had in her possession that were written to her great-grandfather by a cousin from Spain. Little is known about the first production of the play, but the Catastrophic Theatre in Houston notes in their bio of Fornés that she moved to Mexico in September of 1961 after the play had been produced and published that year.

From 1981 to 1991, Fornés was the director of INTAR Theatre’s Hispanic Playwrights-in-Residence Laboratory, a national program supporting Hispanic playwrights. INTAR (or International Arts Relations) was founded in 1966 in New York City. Originally called the Asociación de Arte Latinoamericano, the organization was founded by Cuban and Puerto Rican writers and artists focused on producing in Spanish the works of European and American artists. The theatre’s current artistic director is Lou Moreno.

Fiesta de los Teatros opened 50 years ago at Inner City Arts in Los Angeles. This 10-day festival featured a coalition of Southwestern Chicano theatre groups that called themselves TENAZ, an acronym for Teatro Nacional de Aztlan. The group had come together for the first time at Fiesta de los Teatros in Santa Cruz the previous spring. Thirteen groups in all presented at the L.A. festival. An ad for the festival in the Los Angeles Times promised “el famoso Teatro Campesino y otros grupos extraordinarios,” and said “you don’t need to speak Spanish to have a good time.” Other groups featured included Hijos del Sol from Berkeley, performing Yzidro Macias’ Ultimate Pendejada, which Luis Valdez referred to as “the first full-length acto ever written.” Teatro Mestizo from San Diego performed The Macho Bag, described as “women’s lib from the Chicano point of view.” And Teatro Campesino performed Soldado Razo, an anti-Vietnam piece, and Corridos, an early version of its signature musical comedy.

Chicano playwright Carlos Morton’s play El cuento de Pancho Diablo was published in El Grito del Sol, A Chicano Quarterly in September 1976. The play was a sequel to El Jardín, one of Morton’s first plays. Morton directed the premiere of El Jardín for the MEChA (Movimiento Estudiantil Chicanx de Aztlán) student organization at Harvard in 1975. El Jardín, a comic and irreverent take on the Old Testament, begins in the biblical Garden of Eden and ends in modern-day Chicago, Morton’s birthplace. The sequel, El cuento de Pancho Diablo (later performed with the shortened title Pancho Diablo at the New York Shakespeare Festival’s “Festival Latino” in 1987) is based on Milton’s Paradise Lost and is set in Houston. Good struggles against evil in this comedy, in which the devil ascends to Houston after quitting his job in hell, and God descends from heaven in the form of a Texas Ranger to confront him.

On Sept. 20, El Arquitecto y el Emperador de Asiria (the Architect and the Emperor of Assyria) opened in Spanish with simultaneous English interpretation at the Warehouse Theatre in Washington D.C., produced by GALA Hispanic Theatre. Fernando Arrabal’s absurdist play, written in 1967, was staged and directed by José Carrasquillo and starred GALA Hispanic Theatre co-founder Hugo Medrano as the quixotic emperor. GALA, which stands for Grupo de Artistas LatinoAmericanos, was founded by Medrano and his wife, Rebecca Read Madrano, in 1976. GALA’s website lists two goals for the theatre: “to bring Spanish and Latin American plays to the attention of the Spanish-speaking people in Washington; and to make the English-speaking public aware of the richness and variety of Hispanic theatre.”

The world premiere of Nilo Cruz’s Bathing in Moonlight opened at the McCarter Theatre in Princeton, N.J., directed by Emily Mann. Cruz is a Cuban American playwright and the first Latinx playwright to win a Pulitzer Prize for Drama, in 2003 for his play Anna in the Tropics. Cruz has written more than a dozen plays and has translated plays by Federico García Lorca, among others. He has taught playwriting at many schools including Brown, Yale, and the University of Iowa.