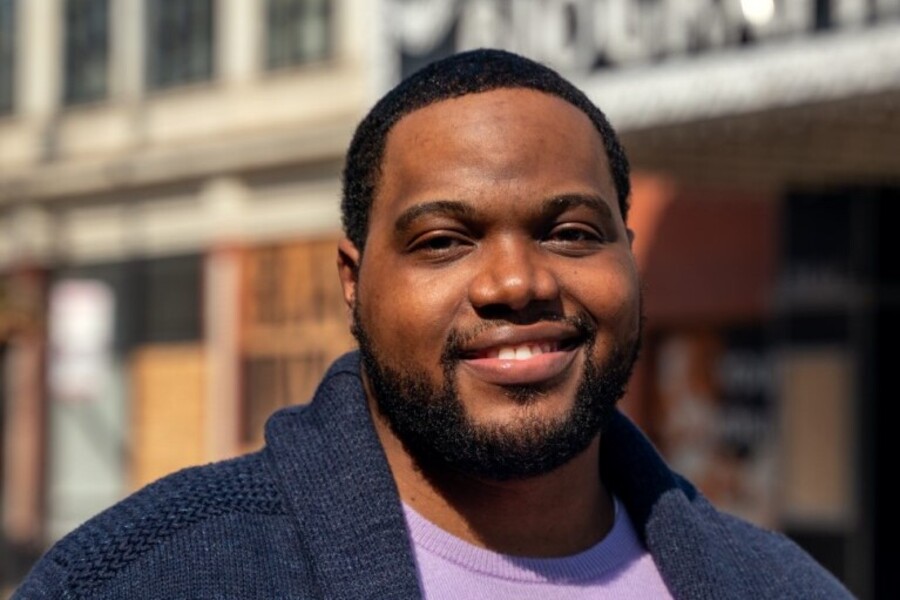 It was just 15 months ago that Ken-Matt Martin and Charles E. Harris II were talking optimistically with American Theatre’s Jerald Raymond Pierce in this space about Martin’s hiring as artistic director, and Harris’s new position as board chair, of the mid-size Chicago theatre Victory Gardens. The conversation marked not only a hopeful new beginning but the resolution of many months of conflict, as the theatre’s previous executive artistic director, Erica Daniels, had resigned before she was to start in the job the previous summer, amid community outrage that her hiring was done internally, without public transparency or accountability. The pushback included street protests as well mass resignations of the theatre’s playwrights group.

That she was a white woman replacing an Asian American artistic director, Chay Yew, and that the theatre hadn’t opened its lobby to protestors, as many other area theatres had, only fueled the perception that the VG board and leadership were out of touch, and were at best ignoring, at worst trampling on, the theatre’s stated commitment to racial diversity. Not only Daniels but also Steve Miller, then board chair and a key longtime benefactor who helped the company pay off the mortgage at the historic Biograph Theatre they’ve owned since 2006, stepped down to make way for new leadership.

That this historic theatre would now be run by a Black artistic director, in partnership with a Black managing director, Roxanna Conner, and a Black board chair, seemed to be a sign at least that the theatre would be taking its anti-racist mission seriously. In their dialogue with Pierce, Martin and Harris talked a lot about transparency and learning from past mistakes, with Harris saying, “Theatre is really unique in that you have so many stakeholders. I think we forgot about the ‘everyone’ part of the mission and making sure that everyone is heard.”

Now the board Harris chairs stands accused of making that same mistake, as the theatre faces criticism from artists and staff who have come forward in recent weeks to call out a lack of transparency and high-handed, top-down decision-making; as before, the controversy has sparked mass resignations, protests, and demands for another clean slate. On June 30, Martin was released from his contract by the board for “cause” (though, according to a recent statement from Martin, he has as yet been provided no explanation of said cause, but was instead offered severance in exchange for signing a NDA, which he declined). A week later, on July 6, in a widely circulated Medium post, isaac gómez, one of VG’s resident playwrights, went public with the news of Martin’s termination, along with a timeline of conflicts the artists and staff had been having with the theatre’s board.

Gómez’s statement brought to light the impending departure of managing director Conner and the failure of the board to reach a deal with another local theatre administrator, Marissa Lynn Ford, to fill the position. It alluded to a “pattern of blatant and ongoing disrespect” for Martin’s and Conner’s leadership, most pressingly around an unspecified “major real estate transaction” to which Martin and Conner had “strenuously objected,” and observed “the same lack of transparency and accountability informed by toxic behavior from this board that led the previous Playwrights Ensemble to resign in 2020.” The post concluded with a statement that gómez and five other affiliated VG artists were resigning their residencies in protest, and demanding both Martin’s reinstatement and the resignation of the nonprofit’s entire board, because “a fish rots from the head down.”

In subsequent days, in quick succession, the theatre’s nine staff members released their own statement of solidarity with the artists, saying that “the board has repeatedly undermined and dismissed” Martin and Conner. “The board hired Ken-Matt and Roxanna to lead this organization, yet they have never truly been allowed to do so,” the statement read in part. Meanwhile the writer of the theatre’s then-current production of CULLUD WATTAH, Erika Dickerson-Dispenza, pulled the rights to her play in solidarity, citing the board’s “oppressive values…grotesquely displayed through their recent actions.” Gómez and their affiliates released another statement asking colleagues to sign a Change.org petition refusing to work at Victory Gardens unless Martin was reinstated and the current board resigned by July 18. As of this writing 1,757 have signed the statement, but the board stubbornly remains in place. And in his statement this week, Martin writes that he has “decided that I need to take a break from nonprofit theatre administration and would not immediately return if asked.”

It is unclear, then, what the next moves of either side will be; no members of the board have spoken to the press on the record, apart from a statement from board chair Harris, which failed to comment on Martin’s status and which defended the board’s course of action by saying “certain decisions must happen at the board level.”

Some glimmer of a possible future might be glimpsed in Martin’s statement, in which he called for the current board to relinquish their posts and make way for “an alternate board slate” he said that VG staff had been putting together, as well as raising “considerable funds in the form of pledges, all contingent on the current board’s resignation.” Indeed, he said that the staff of VG have been “building a transition plan with skilled facilitators and advisors volunteering their time.”

In fact, the members of the VG staff were the only players in this drama who agreed to answer questions from American Theatre. Responding collectively in writing, they told me last week that they were still showing up for work, though they don’t have clarity on payroll past the scheduled run of CULLUD WATTAH (which would have closed on July 17), and that they have been reporting to interim managing director Conner, whom they wrote “has taken on countless roles with grace and compassion,” though the workload placed on her “has been deeply unfair.”

One big sticking point seems to be this unnamed real estate transaction. Sources close to the theatre speculate that it probably involved the purchase of a now-closed diner within the Biograph Theater building, which may be the “challenging co-owner situation” that Harris alluded to in his statement. Other sources I spoke to noted that while it is not unheard of for a board to independently make important fiduciary decisions, it was not normal, let alone good practice, for a board to do so over the objections of its artistic leadership. Indeed, one consistent point of all those protesting VG’s current board leadership is that the problem is less the substance of its decisions than the manner in which they’ve been made and communicated to artists and staff.

The staff collectively conceded that “reconfiguring VG’s physical footprint may prove to be a smart strategic decision,” but that they saw red flags throughout the process—chiefly, that no one on the board consulted the staff about the building’s pressing needs for HVAC, roof, and bathroom improvements, but simply pressed ahead with their own plans, and were puzzled that the board “discounted the informed opinions of the leaders they put in place [Conner and Martin], who have the trust of their constituents and years of nonprofit experience between them.

“In short,” continued the staff, “it’s not necessarily about the building—it’s about how and why this mission-oriented institution makes major strategic decisions, and about accountability for those processes. We understand that it’s entirely within the board’s purview to look out for the financial well-being of Victory Gardens. However, we would also like to know how this purchase aligns with the mission of Victory Gardens and those it serves.”

Though he doesn’t weigh in on the specifics of this deal or decision, in his statement Martin is both circumspect and unwavering about the root problem. He writes, “Most of the members of the Victory Gardens board are dedicated individuals who have made many sacrifices over many years for what they see as the good of the theatre. And yet they continue to operate in a vacuum, disregarding the expertise of the qualified leaders they hire and also discounting the wisdom of experienced nonprofit professionals who are their peers on the board. My efforts to bring in mediators or outside consultants to find a healthier path forward were routinely put off. Whether or not they intend it as individuals, this board is enforcing a culture of top-down hierarchy and secrecy that is deeply at odds with the culture of transparency and accountability to stakeholders that we are trying to build as a staff.”

And this, Martin points out, points to a larger systemic issue. “American theatres are not built to center the needs of the artists or the staff,” he writes. “They are top-heavy institutions that cater to donors’ preferences, that twist themselves into pretzels to fit foundations’ latest giving priorities, and that give boards composed of professionals from other fields ultimate sway over how theatre is made.” Even as he steps away from this particular fight, Martin says he hopes the larger takeaway is that this isn’t about “one institution’s dysfunction,” but an “example of the industry-wide need to seriously reevaluate our models and modes of operating.”

Some of that reevaluation has been happening, including at the recent TCG conference in Pittsburgh, where Michael J. Bobbitt, executive director of Massachusetts Cultural Council, elaborated on his provocative 2021 piece for American Theatre, “Boards Are Broken, So Let’s Break and Remake Them,” one of the key points of which bears repeating in light of VG’s troubles. Bobbitt wrote:

It is very strange to me that the oversight of the entire nonprofit regional theatre sector is in the hands of volunteers who have little to no expertise about the craft or the business, and that there is relatively little transparency about their decisions, let alone responsibility to carry out those decisions. Ya’ll, this model is broken.

Even if VG’s current board members do accede to community demands to step down, and are replaced by another board of presumably more artist-focused stakeholders, questions of nonprofit governance in the arts are likely to remain as long as this model persists. I’ll repeat a version of a question I’ve heard voiced many times over my career on this beat, including in Bobbitt’s piece: In an industry full of creative folks, can’t we get creative and come up with a better way to run these theatres?

This report initially claimed that Victory Gardens had not released a statement in support of Black Lives Matter after the murder of George Floyd; in fact they issued one on May 30, 2020.