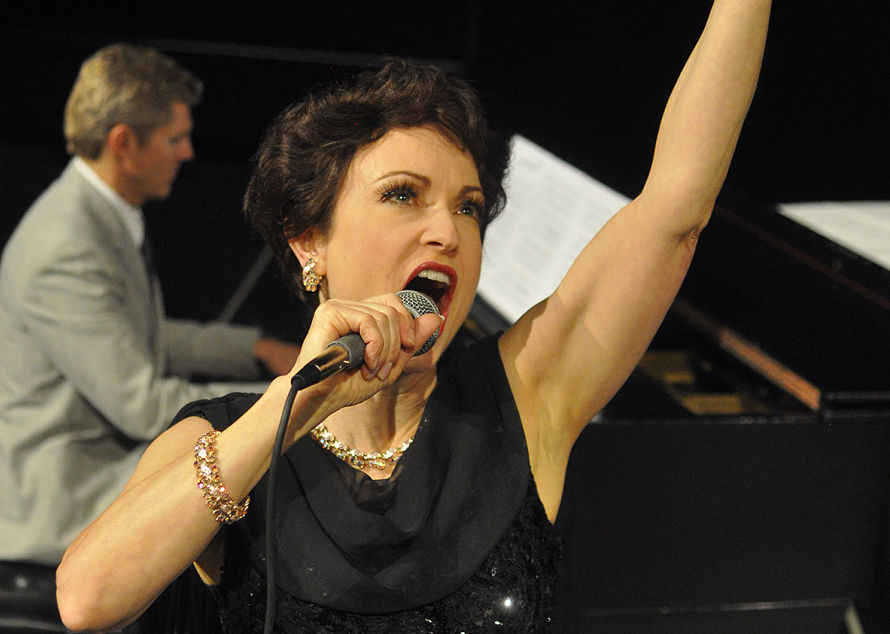 Brent Schindele and Gigi Bermingham in "End of the Rainbow." (Photo by Suzanne Mapes)

Her birth name was Genevieve Germaine Bermingham, but as her parents were French, those initials morphed easily into the quintessentially Gallic “Gigi.” Born and raised in Northern California, Bermingham has made her career in the southern part of the state in a wide range of stage roles, from Maria Callas in Master Class to Arkadina in The Seagull. She’s now appearing as Judy Garland in Peter Quilter’s End of the Rainbow at International City Theatre in Long Beach (through Mar. 15).

In addition to acting, you’ve done some cabaret, right?
My husband, Matthew Goldsby, and I have an act we do around Christmas called Cabaret Noel; it’s a mixture of traditional French carols and some original Christmas songs. We have a kind of Nichols and May, Burns and Allen thing going. You laugh, you feel stuff. I love singing French; it was my first language. This past year we did a show at Vitello’s, near where Robert Blake shot his wife.

That’s the Christmas spirit. I remember when you won the Natalie Schafer Award, given each year by the L.A. Drama Critics Circle to a great comic actress.
I won that in 2002 for my solo show Non-Vital Organs. I mounted it again at the Odyssey Theatre in 2004 and won an Ovation Award for solo performance. But all that acclaim didn’t translate into anything—my career was not producing income—so for seven years I went into real estate. Then in 2010 I put real estate aside and came full-bore back into acting. I now have almost a career—I work more now than ever.

What is it about real estate? I hear about a lot of actors who’ve made that their second career.
It’s the right fit for the right kind of personality: You’re a salesperson, which actors can do, and the hours are flexible. But if you’re obsessive like I am, it can suck you in. I was dealing with real people’s real money, which they were using to make the biggest investment of their lives. I felt that responsibility so keenly. It was torment.
I suffer a lot as an actor—I’m just extremely sensitive—so I thought that working in the real world with real people would be easier. It was much harder. Coming back to acting has been like entering a warm bath. This is all make-believe!

That’s always struck me as a paradox: Actors have to develop a thick skin about the business, but at the same time maintain their emotional sensitivity to do their job.
There’s another alternative: to realize that living in a state of discomfort is not the end of the world. My profession causes me almost endless discomfort, but I’ve decided that rather than seeking to overcome that, I’m letting it go—I’m willing to embrace the discomfort. Sensitivity is where the art comes from, and if you dull that, you dull your art. That’s the cost of doing business for me—this is just who I am. I’m neurotic.

What did you know about Judy when you got the part?
I didn’t know anything! If you’d asked me before, I would have said The Wizard of Oz. We didn’t have a TV growing up—my mother threw it out when she saw we were getting hooked on it. We listened to Edith Piaf around the house, not Judy Garland. When they called me, I said: “I have to think about it.” Of course, 24 hours later, I’m on YouTube and champing at the bit.

Watching her work, I discovered just how good she is. Now I’m in awe of her, which in a way makes performing her difficult. You do have to sort of mimic her—you’ve got to have some anchors that convey an essence of what she had. Basically, I’ve fallen in love with Judy.

The show is not exactly a valentine to her, though.
It’s a sad part of her life, when she’s not at her best, unfortunately. She was a bottomless pit of need, which I identify with. But the play’s also very fun, very funny, very sexy. We have to laugh at people’s foibles, at the lengths people will go to get the things they want. I think we’re often unconscious of our narcissistic urges.

What would we find under your bed?
Boxes of old playbills that my husband can’t believe I’m holding onto.

Do you have any pre-show rituals or superstitions?
Before every show, I make a gentle suggestion to my castmates that we do an energy circle—gather around and say something to thank all those people out there tonight, the playwright who created this beautiful vehicle, that we’re together in this effort. It doesn’t fool anybody; it’s really a prayer circle, of course, but I don’t want to terrify people by calling it that.