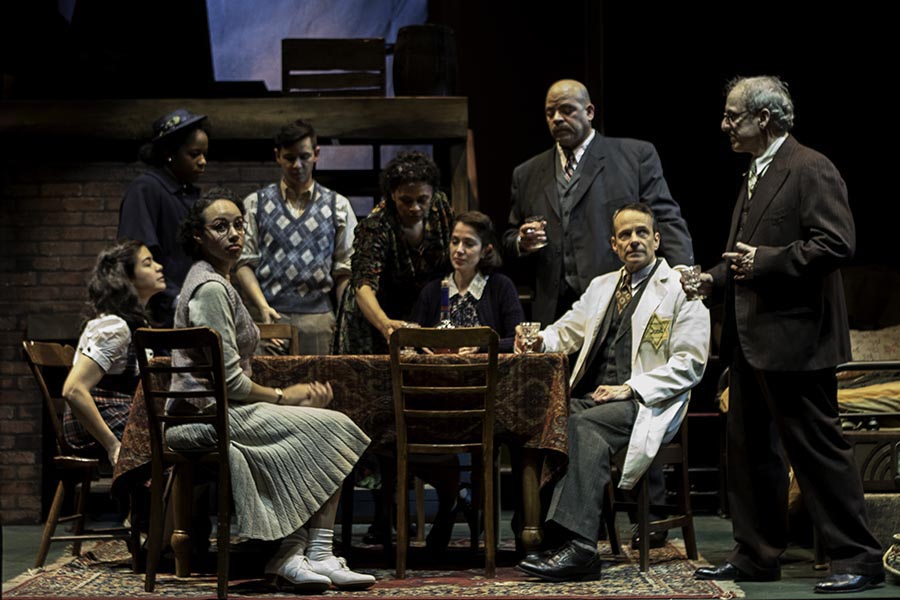 The cast of "The Diary of Anne Frank" at People’s Light in Malvern, Pa. (Photo by Tori Harvey)

When I first read the play The Diary of Anne Frank, it was the original Frances Goodrich and Albert Hackett version that ran on Broadway in 1955, and I was a student teacher preparing to teach the play to a diverse middle school English class that didn’t include any Jewish students. My parents are Jewish, I consider myself Jewish, and I had a number of Jewish friends growing up, so it was a new experience for me to explain Judaism and Jewishness. As a white Jewish person it was rare for me to be an outsider.

Following an intense rise in documented anti-Semitic incidents in the past few years, as noted in the Anti-Defamation League’s latest reports, there’s been renewed attention to the idea of Jewish people as outsiders, which in turn has led some to focus on the unique threat of anti-Semitism, while others have emphasized the importance of Jewish-American solidarity with other oppressed and marginalized communities (a theme I touched on in my piece about Jewish representation in American Theatre’s March issue). When I first heard about the multiethnic staging of The Diary of Anne Frank at People’s Light in Malvern, Pa. (Feb. 21-March 31), I thought back to that middle school class, in which I felt like an outsider, and how the students of color—outsiders in different ways—related to Anne’s story.

So I was bit flummoxed to read the impassioned response from Wendy Rosenfield, editor in chief of Philadelphia’s BroadStreetReview.com, arguing that the casting approach was insensitive toward Jewish people, since the play is based on the real-life story of white European Jews labeled another race by the Nazis. Given my experience teaching the play to a multiethnic class, I had been enthusiastic about the idea of people from different marginalized communities coming together to tell this iconic story of Jewish oppression. But Rosenfield’s critique made me wonder: Does casting a diverse group of performers to play the characters in hiding, based on historical figures who were white Ashkenazi Jews, erase the specific history the production was striving to lift up?

As came up in my previous story on Jewishness in theatre, there is hardly anything more central to the religion of Judaism or the culture of Jewishness than asking questions, and following the often heated social media conversation about the show left me with plenty. I wasn’t alone.

“I was very nervous about this,” admitted Randi Boyette, senior associate regional director for the ADL, who spoke with the company about the concept early on. “This is a story about Jews, and Jews in the Netherlands looked like their neighbors,” she continued, addressing a panel at People’s Light following a recent performance. “They had to be marked off, because they looked like their neighbors.” But when she saw the lobby display featuring historical photos of the real-life figures who inspired the play, “and I saw that everybody gets to see the real faces of the real people,” she was reassured that the production respected the history.

It’s not that she doesn’t take accusations of whitewashing seriously; as a Holocaust educator, she said she’s seen students read the original 1955 version of the play and not realize the Frank family was Jewish. But the People’s Light staging uses Wendy Kesselman’s adaptation of the Goodrich and Hackett script, presented on Broadway in 1997 with Natalie Portman and tweaked in 2016. Kesselman’s play makes a deliberate effort to incorporate aspects of the Jewish religion and culture, including Hebrew prayers. “This adaptation makes a difference, and this production made it very clear that everybody in that attic was Jewish,” Boyette said. “There are Jews of all hues. There certainly weren’t in that attic at that time,” she conceded, but because a more multiethnic Jewish community is a contemporary reality, “that made this fine for me.”

For me it was more than fine: This particular production’s casting elevated the play to another level, embracing the characters’ Jewishness while speaking to a time in which many people, not only U.S. Jews but especially communities of color and other historically marginalized groups, feel less safe and welcome in this country.

Also on the panel was Joel Fabian, a Holocaust survivor and educator. Responding to a question of whether the characters needed to “look Jewish,” he said, “You’ve got to remember one thing: How do you ‘look Jewish’?” He continued, “There was a concentration camp built for the American G.I.s,” mentioning that out of those 350 Americans, only 65 were Jews. “The rest of them looked Jewish to the Nazis.”

But what about the historical fact that the figures in hiding in the annex were white, and were targeted and killed anyway? Jared Jackson, founder and executive director of the consulting group Jews in ALL Hues, who previewed some scenes and would later speak on a different panel, pointed out that, unlike Porgy and Bess and the plays of August Wilson, whose authors made clear that the shows must be cast with African-Americans, Anne Frank never specified how she wanted her story told (indeed she didn’t even know it would be turned into a play at all). And playwright Kesselman gave her blessing to the People’s Light approach. To Jewish people who are uncomfortable with this interpretation, Jackson had this to say: “They want to keep this narrative going, which is totally valid and right, and at the same time there are other realities that can be explored using this story.” He stressed, “Not everybody who was taken to a concentration camp, not every Jew murdered by the Nazis, was white.”

Issues of identity and representation are very complex, and the key in tricky situations like these is to approach the production with great care. People’s Light’s resident dramaturg, Gina Pisasale, who identifies as Asian-Pacific American, told me how this was the first time in her seven years with the company that they brought in an outside dramaturg, Alix Rosenfeld.

“For this show,” Pisasale said, “I did not feel equipped to support this production in several crucial ways, and felt very strongly that we needed someone Jewish behind the table.” In addition, although director David Bradley is not Jewish, he was in conversation with Kesselman, who approved his concept. Said Bradley, “We spoke with many people as we developed this approach—rabbis, leaders and staff members of Jewish organizations, activists, scholars, artists—and listened to ideas, questions, thoughts from multiple perspectives.” Those discussions took place before and after they decided to move forward, he said.

Actor Melanye Finister, who is black and whose husband is of white Ashkenazi Jewish heritage, plays Mrs. Van Daan in the People’s Light staging. She told me how meaningful the show has been for her family: Her son and daughter are both Jewish, and she was very close with her father-in-law, a survivor saved by the Kindertransport. She noted that, after seeing the production, her son told her “he really liked seeing people of color, for personal reasons, because there he is.”

Jared Jackson feels similarly. “The Diary of Anne Frank with a multiracial cast is totally relevant to today’s world,” he said. “There are tons of Jewish families who are multiracial. My son, my wife, myself—we’re all a really broad spectrum…if that were to happen to our family again, that’s what we’d look like.”