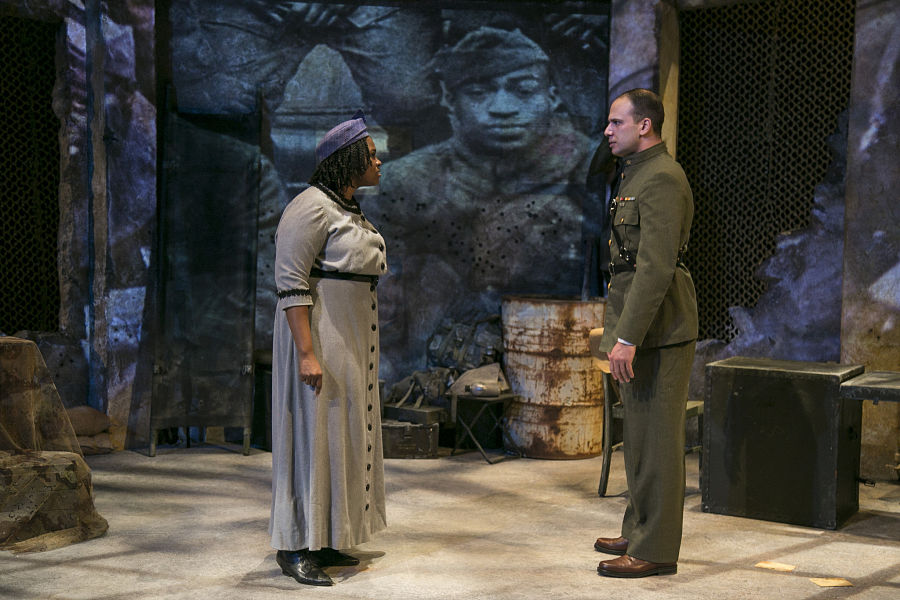 Like whip-smart, refreshingly unlikable female protagonists? Look no further than the plays of Gina Gionfriddo, which include  Becky Shaw and Rapture, Blister, Burn. This month Boston’s Huntington Theatre Company will premiere her latest, Can You Forgive Her? (March 25–April 24), about a woman so desperate and in debt that she takes shelter with a stranger. Will we forgive her? As it’s a Gionfriddo play, we probably will—but it won’t be easy.

And if you wondered what the fuss was about when Branden Jacobs-Jenkins’s An Octoroon had two acclaimed NYC runs (at Soho Rep and Theatre for a New Audience), you can head to Philadelphia’s , where it plays March 16–April 10 (unless you happened to catch it last month at Boston’s Company One). This metatheatrical retelling of Boucicault’s melodramatic classic, seen through the lens of African-American identity politics, will be directed by Joanna Settle, who will helm Stew and Heidi Rodewald’s much-anticipated The Total Bent at New York City’s Public Theater starting May 10. —Diep Tran

New American plays seem to be in season in the Midwest—particularly plays getting a second or third (or more) production but still only a few years old. First is Greg Pierce’s Slowgirl at Milwaukee Chamber Theatre (through March 20), about a teen who retreats to her reclusive uncle’s Costa Rican bungalow after an accident at a party. Rebecca Gilman’s moving Luna Gale, about a social worker’s difficult journey to find a safe home for a baby whose family might love her too much, is at Cleveland Play House through March 20 as well. The Rockies and the Southwest also seem keen on new American plays this month. Utah’s Salt Lake Acting Company, in collaboration with Flying Bobcat Theatrical Laboratory and the Red Fred Project, offers the world premiere of Climbing With Tigers March 4–27. It’s adapted by Troy Deutsch from a story by 8-year-old Nathan Glad, who was born with osteogenesis imperfecta (often called “brittle bone disease”), and Dallas Graham. And in Denver, Curious Theatre Company produces the local debut of Quiara Alegría Hudes’s Elliot, A Soldier’s Fugue, the first play in her trilogy about a former Marine and his family, March 10–April 23.

Finally, LBJ straddles his home state in a coproduction of All the Way between Dallas Theater Center, where it plays March 3–27, and Houston’s Alley Theatre, where it ran in January and February. Robert Schenkkan’s drama tells the story of the 36th president’s fight to pass the Civil Rights Act during his first year in office. —Russell M. Dembin

Kirsten Greenidge’s plays, including Milk Like Sugar, Bossa Nova, and Sans-culottes in the Promised Land, are historical, topical, and known for bringing underrepresented voices to the stage. Her newest, Baltimore, was made with that last mission in mind: It’s part of a Big Ten Theatre Consortium commissioning program, an initiative to encourage female writers to create strong female roles geared toward college-age performers. Baltimore follows a resident advisor forced to handle a racially charged incident among a group of freshmen. Baltimore will make the rounds of campuses around the country, including in the play’s eponymous state, where it’s running at the University of Maryland’s Clarice Smith Performing Arts Center through March 5.

Nearby, at Rep Stage in Columbia, Md., Antigone Project, which appeared this fall at Profile Theatre in Portland, Ore., is running through March 6. In the piece, five playwrights—Tanya Barfield, Karen Hartman, Chiori Miyagawa, Lynn Nottage, and Caridad Svich—have creatively reimagined Sophocles’ tragedy for the 21st century, journeying from an African village to the underworld and beyond. —Allison Considine